Scientists Debate Why Childbirth Is So Brutal

Some scientists defend an age-old skeletal explanation for childbirth — dubbed the obstetrical dilemma — while others propose a metabolic alternative. 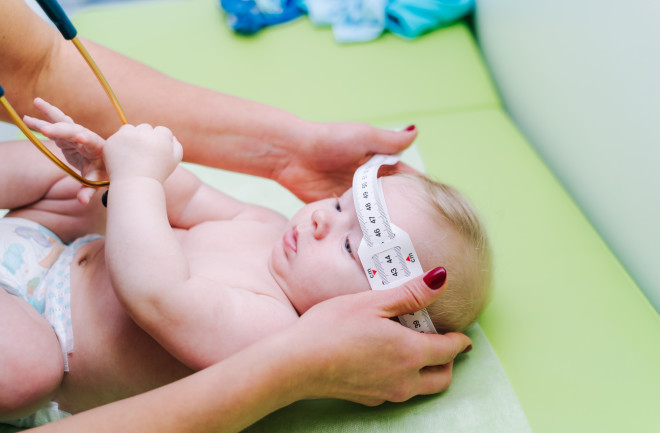 Human babies barely fit through the birth canal. In the U.S. alone, 700 people die each year from complications during delivery. And even after all that trouble, newborns come out … well, helpless. Unlike baby chimpanzees, who are basically tiny adults, human babies spend a whole year learning to sit up, walk and talk. It’s a conundrum that’s left many anthropologists wondering why we evolved this way.

Hips are the usual suspects. For nearly a century, scientists hypothesized that the hips face an “obstetrical dilemma” — they must be narrow enough to allow us to walk on two legs but wide enough to birth big-brained babies. Evolution’s solution, the argument goes, was to truncate gestation so that lesser developed newborns can squeeze through the birth canal. “This trade-off explains why we have such helpless infants, but also very painful and long births,” says Nicole Webb, a paleoanthropologist at the University of Tübingen and the University of Zurich.

The logic is compelling, sure, and the smoking gun could be out there. Webb’s team is searching for it as we speak. But others, like Holly Dunsworth, a bioanthropologist at the University of Rhode Island, says there’s not much evidence to support this. “People tend to get swept away by good stories,” she says. “But the obstetrical dilemma is an untrue way of evolution occurring.”

Dunsworth doesn’t deny that childbirth is difficult. But the obstetrical dilemma doesn’t cause that difficulty, she says. In fact, its ubiquity makes labor even more challenging because it pathologizes a birthing person’s hips and “zaps their power,” she says. The pernicious idea that hips are evolutionarily compromised instills self-doubt and impacts medical decisions, like whether to resort to a C-section. Ultimately, it implies that medical interventions are “inevitable or imperative.”

Skeptics chip away at the hypothesis by citing two major criticisms: Wide hips may not impede movement, and human babies may not be born as early as we once thought.

Certainly, tight pelvises can cause medical disasters. But recent research casts doubt on whether wide ones hinder movement. In modern-day humans, there’s no evidence that wide hips are worse for walking — not even when comparing between males and females. In fact, some experts postulate that wide pelvises could be even more efficient than narrow ones.

But Webb interprets these findings differently. To her, the null relationship is confirmation of an existing constraint on hips; evolution of bipedalism homed in on a narrow distribution of efficient pelvic shapes, she explains. Because our population is already filtered for good walkers, looking within this narrow scope of variation won’t reveal any meaningful differences.

“That’s the range we’re confined to,” says Webb. “To say there is no obstetrical dilemma [on these grounds] is a very bold claim.”

Of course, there’s also an issue with the so-called solution to the obstetrical dilemma: Human pregnancies aren’t premature. Sure, we’re born with less than 30 percent of our adult brain mass, the smallest percentage of any primate (including chimpanzees, which are born with brains around 40 percent their adult size). And after we’re born, we must grow and rewire our entire nervous system to learn behaviors like speaking, sitting up and walking.

But there’s nothing uniquely human about building brains outside the womb. In fact, every primate does most of the work after it’s born. If anything, our gestation is actually longer when compared to other mammals. Bigger species tend to have longer pregnancies, but ours are 37 days longer than scientists might predict for any other human-sized primate. That’s six to eight weeks longer than bonobos and chimpanzees, and one to three weeks longer than gorillas.

“Pound for pound, given maternal size, we have the longest pregnancies, we have the biggest babies and the biggest brains,” Dunsworth says. “That doesn't look like we're born early. It looks like we take a lot out of mama during pregnancy and she births a great, big, gargantuan baby.”

Webb, however, thinks that gestation length misses an important point: neural development. At the end of the day, we’re born as codependents with lots of growing to do. And even if pregnancies aren’t unusually long, our babies are still unusually helpless.

Dunsworth says the obstetrical dilemma is compelling, but it doesn’t hold water. There’s no known cost associated with having wide hips and, even if there was, there’s no solution if human babies aren’t born comparatively early. So, in 2012, she and her colleagues proposed an alternative mechanism to explain the timing of birth.

They named it the EGG hypothesis — for Energetics, Gestation and Growth. Because incubating a fetus is costly, they argue, pregnancy length is limited by parental energy. In short, big mammals like humans can expend more energy and tolerate longer pregnancies. It’s a constraint all mammals face and humans don’t buck the trend.  “I wanted to name it the HAM & EGG hypothesis for Humans Are Mammals, but that was too cheesy,” Dunsworth says, second pun unintended.

Energetic demands skyrocket as fetal growth rates accelerate, and parents can’t keep up. At most, humans can sustain 2 to 2.5 times their resting metabolic rate, which is the amount of energy we spend just to stay alive while we’re chilling out. Fetal demands approach that limit during the third trimester and threaten to cross it around 9 to 10 months. Parents give birth then simply because they can’t shell out the energetic costs anymore.

“There has to be an energetic limit to growing living tissue inside of you day after day,” Dunsworth says. “That just seemed obvious while I was looking into evidence for the obstetrical dilemma and not finding any.”

Webb, meanwhile, doesn’t think the EGG hypothesis has killed the much older skeletal hypothesis just yet. The two can happily coexist, she says. “I think both are very important pieces of the puzzle. And one shouldn't be argued against the other.” Human birth might depend more on energy banks or more on skeletal structure — but Webb doesn’t have a dog in the fight. “We all just want to make birth better for women alive today.”

The researchers’ shared goal, despite their ideological differences, can hopefully scrub away the battle lines and pave a world where birth is as safe as humanly possible.

How the Age of Reptiles Began 250 Million Years Ago