Experts Are Moving Past the Disease Model of Addiction

“The idea with addiction is that these substances or behaviors are hijacking the machinery in the brain that has evolved to help us survive.” 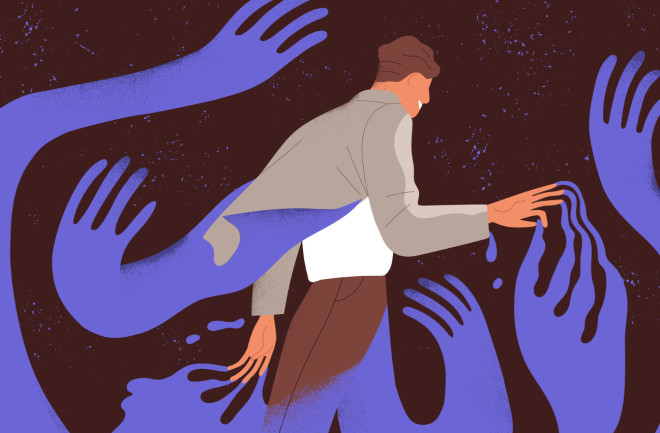 Addiction is a behavioral phenomenon that has touched many of us. Whether it be through our own relationship to it or through our family or friends, addiction often leaves us feeling helpless, stripped of agency and robbed of our capacity to help those we care about most.

Addiction is perhaps most notably manifested in a person’s relationship to drugs, during which their desire to consume and experience a specific drug overrides their desire to participate in meaningful interactions with the world and others. According to the CDC, drug overdose deaths in the U.S. increased by more than 28 percent from 2020 to 2021. But addictive behaviors can come to dominate lives in a number of different ways: gambling, watching pornography, compulsive shopping and even spending time on social media, for example.

Historically, such addictions were viewed as a moral failing. Tightly coupled to how western monotheistic religion viewed our relationships with alcohol, individuals who excessively engaged in drinking were expected to be punished for their irresponsible behavior. But with the rise of western medicine, and with it clinical psychology, addiction was redefined as a disease.

“The disease model of addiction, from a humanistic standpoint, was very productive because you shifted a moral failing of an individual to something that a person is suffering from,” says Ryan Ward, a behavioral neuroscientist at the University of Otago in New Zealand. “That's very useful because you change the idea that ‘addicted people need to be punished’ to ‘addicted people need to be helped.’”

When the field of neuroscience became involved, researchers studied the brain changes that occur as a result of taking certain substances. This led researchers to localize addiction to certain regions of the brain. Based on these findings, they could begin explaining what was actually going on with drug addiction: Drugs release large amounts of dopamine in a region of the brain called the nucleus accumbens. This is the biological instantiation of addiction, the thing that must be fixed if we want to “cure” it.

“The idea with addiction is that these substances or behaviors are hijacking the machinery in the brain that has evolved to help us survive,” says Ward. “When we eat or have sex, things that ensure the survival of the species, the dopamine system serves to incentivize those activities, and to pay attention to environmental cues that predict the availability of those activities.”

But, while drugs do drastically alter the dopamine system in the brains of everyone who takes drugs, only a subset of people will become addicted to them. Why? “I think the issue is that we have gotten so good at localizing what drugs do in the brain, we’ve almost taken the brain out of a person, and it seems like we are not interested in the whole realm of human experience that can contribute to an addictive behavior,” explains Ward.

The Diagnostic and Statistical Manual of Mental Disorders (DSM), essentially the Bible for clinical psychologists, lists known mental health disorders and their associated symptoms. When it comes to addiction, the DSM talks about things like withdrawal, dependency and tolerance as tell-tale signs that an individual has developed an "addictive disorder." The manual can be useful, from a clinical perspective, when discussing the symptoms of patients — and offers several potentially effective treatments to address those symptoms.

But from a person-centered perspective, this approach can be limiting.

While generalizing about what addiction does to the brain and its associated symptoms can be useful for developing pharmaceutical treatments that mitigate the effects of things like withdrawal, the heterogeneity of genetics, environmental conditions and personal motivations for using drugs across a population means that a more personalized approach to understanding and treating addiction is necessary.

Contemporary research into addiction, which has approached the behavior from a phenomenological perspective, asks what personal motivations may lead a person to develop an addictive behavior. After all, people often develop an initial relationship to a drug through motivations that are common to a lot of us; perhaps the person wishes to be more confident in a social setting, facilitate a romantic meeting, counteract fatigue, pursue a euphoric state or simply sate a sensory curiosity.

But these initial motivations can morph quickly for individuals who are coping with mental illness, pain and trauma, or compulsive personality traits. These factors can be compounded if, through social reinforcement, drug-seeking behaviors are a person’s only medium to experience social connection. The social support of friends and family who are willing to go out of their way to recognize destructive behavior and seek outside help can be absent for a lot of people. They may also find themselves unable to seek help because of the stigma attached to being an “addict.”

Different cultural contexts and nuances can play a significant role in the development of addictive behaviors and mental health issues too. Intergenerational poverty, often the legacy of colonial practices, can leave Indigenous groups particularly vulnerable. However, Indigenous groups often have their own cultural ways of supporting and dealing with these issues when applicable.

“It’s important for us to both recognize the economic and societal factors that confer increased risk on these groups while being sensitive to their worldview so as to incorporate it into any treatment or support,” says Ward.

The Road to Recovery

Although understanding what an individual’s motivation was for the initial and continued use of a drug is important, motivation also plays a central role in the treatment of addiction. Recognition of a problem, and the subsequent development of motivation to end that dependency, is a crucial step of the road to recovery for any person experiencing addiction.

That person’s capacity for deriving meaning from interactions with the world and others may have been disrupted by addiction, but their motivation to restore meaning through other hobbies, work or relationships without drugs offers a pragmatic way others can help and care for those wanting to overcome their addictions.

Additionally, treating addiction as a brain-based disease with pharmaceutical interventions can undoubtedly help some people overcome the pain that is induced when they decide to wean off a certain substance or behavior. But these methods can also fall short in addressing the larger psychological challenges that hamper a person’s healthy relationship with the world. Combining cure-oriented methods that address the neurological underpinnings of addiction with care-oriented methods that aim to foster the development of meaningful behaviors offers a way forward.

If you or someone you know is experiencing addiction, the Substance Abuse and Mental Health Services Administration (SAMHSA) offers a variety of resources. You can also contact the administration’s National Helpline at 1-800-662-4357 any time of day or night for information about support and treatment facilities in your area.

Here's Why Coronavirus Cases Are Surging in China

How Effective Are Colonoscopies at Detecting Colon Cancer?