Is It Time to Rethink Food Coloring?

The FDA says they’re safe in moderation. But some experts say their guidelines are outdated and need changes to account for the possibility that dyes affect children's brains and behavior. 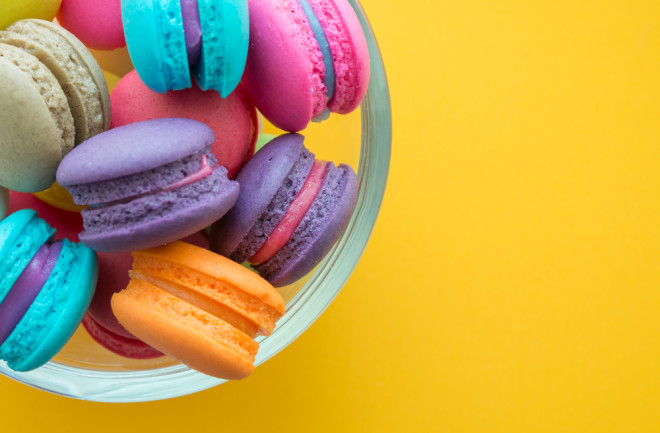 I held the bag of peanut M&Ms out to my sister: “Come on, I got these to share!” They’d been free from the concessions stand at the outdoor venue where we were attending a symphony concert, courtesy of her husband’s workplace. “I don’t want to eat this whole bag by myself.”

“They have so much artificial dyes and stuff in them—I’m trying to avoid all of that,” she said.

The way she phrased her polite refusal got me thinking. Of course, M&Ms are unhealthy junk food. That’s why I wanted to share the bag rather than eat them all. But why single out food coloring as a special cause for concern above and beyond the general crappiness of highly processed food? As a science writer, I decided to find out. This is what I learned:

Food Coloring Is Kind of Everywhere

According to the FDA, consumption of dyes increased fivefold between 1950 and 2010. A recent study from the California Office of Environmental Health Hazard Assessment (OEHHA) estimates that median total dye exposure for children five to 16 years of age is currently about 0.23 milligrams per kilogram of body weight per day.

It’s easy to associate it with obviously processed products like M&Ms, but food coloring can crop up in lots of unexpected places like salad dressing and medicines. Even oranges will sometimes have their peels dyed a brighter orange to make them look more appealing. “We're probably more exposed than we realize,” says environmental toxicologist Rachel Shaffer.

And children are exposed most of all: A lot of foods with high levels of artificial colors are marketed towards kids – think sugary breakfast cereals and wacky ice cream flavors. Plus, Shaffer says, since kids are smaller, they’re taking in a higher dose relative to their body weight than an adult would.

The FDA Regulates All Food Dyes in the U.S.

The concept of food coloring has been around since ancient Egypt. But the first lab-created food dye, a mauve color, was invented in 1856 by chemist William Henry Perkin. It was derived from coal tar, which was pretty much par for the course for the 19th century chemistry. (At the time, mercury, lead, and arsenic were also commonly added to color candy). It wasn't until the turn of the 20th century, however, that federal oversight of food coloring and additives began in earnest, coming under the jurisdiction of the FDA when it was formally established in 1930.

Nowadays, there are nine FDA-approved synthetic food colors on the market in the United States. Just three colors — Red #40, Yellow #5, and Yellow #6 — account for 90% of that figure. Eight of the nine dyes are derived from petroleum. There are also 28 “exempt” food colorings that come from plant and mineral sources, and in two cases insects.

The current standards by which food dyes are regulated date back to 1960, stipulating safety norms and conditions for safe use. All color additives have to meet purity standards, for example. And samples from each manufactured batch of synthetic dye must be sent to FDA's Color Certification Laboratory for physical and chemical testing for purity before the batch can be used. Products that use artificial dyes must list them among the ingredients.

Not every product passes these standards. About half of the dyes that were on the market in 1960 were taken off in the following years because they didn’t meet updated safety standards.

The FDA guidelines for the nine synthetic dyes currently on the market were established based on animal studies conducted between 1966 and 1987. Once a food additive has been cleared by the FDA, there’s no requirement to reassess its safety, says Lisa Lefferts, a senior scientist at the Center for Science in the Public Interest, a watchdog group that petitioned the FDA in 2008 to ban synthetic food dyes; they're still lobbying for tighter regulations today. The EPA also requires re-registration for pesticides every 15 years, notes Lefferts. “But there’s no such look-back requirement for substances added to food.”

Some Scientists Are Concerned About How It Affects Kids

The biggest source of food coloring controversy is whether artificial food colors are bad for children’s developing brains. In the 1970s, pediatric allergist Benjamin Feingold claimed a link between food coloring and hyperactivity in kids, which sparked several studies investigating the connection.

The FDA’s position on the subject, from a 2011 review, is that there’s no clear cause-and-effect relationship between food coloring and hyperactivity, and any sensitivity to food coloring is likely “due to a unique intolerance to these substances and not to any inherent neurotoxic properties.”

But Shaffer says that intolerance and neurotoxicity don’t have to be mutually exclusive. “We're not all genetically identical mice,” she says. “Just because you're not seeing it in everyone in these human studies doesn't mean that effect isn't real."

This year, the California Office of Environmental Health Hazard Assessment (OEHHA) published a very thorough meta-analysis of all of the research ever done on the subject from 1978 to the present: animal studies, human clinical trials and toxicology data. They found that 64% of the 27 clinical studies they analyzed found a positive association between added food coloring and behavioral problems like hyperactivity in kids. And the more recent studies — those published in the past 30 years — were most likely to show a correlation between dyes and behavior.

Animal studies also found that food coloring influences rats’ memory and brain chemistry in ways that appear to dovetail with the human clinical data. “We're seeing biological plausibility for some of the effects that we're seeing in humans,” says Shaffer.

It’s not always easy to pinpoint the dietary effects of specific ingredients like dyes in processed foods, says Sheela Sathyanarayana, an environmental health specialist at the the University of Washington. “Food dyes are often associated with sweet foods,” she says. “Really being able to control for the sugar is also important because we do know sugar is related to hyperactivity.”

A common criticism of food dye studies is that many of them use mixtures of dyes, making it more difficult to identify which dye or dyes are particularly problematic. Each dye has a unique chemical structure, and potentially different health effects. Azo dyes (Red #40, Yellow #5, and Yellow #6) are the most frequently scrutinized. But it’s not clear whether azo dyes are inherently worse than others, or simply more common.

As a scientist, Lefferts says, there are certainly more questions about food coloring that could benefit from further research. But as an activist, she believes the course of action should be for the FDA to re-evaluate their position based on the research that’s already available. “I'd really rather just see these dyes out of the food supply,” she says. “We have lots of evidence that they cause problems. Let's get a warning label. Or let's get rid of them.

Europe’s Standards Have Changed in the Past Decades

That’s led to fewer artificially colored products on the European market, because manufacturers don’t want to have to use a warning label. Lefferts and Shaffer say they both support the idea of employing a similar warning label in the U.S. — something California may soon require.

While the experts consider the research and policy interventions, Sathyanarayana’s advice for ordinary consumers is straightforward: “Eat fresh fruits and vegetables, when possible to try to reduce the number of processed foods in your diet. Read the labels: the smaller the number of ingredients, the better.”

More From Discover
Health
Liquid Meal Replacements: Can We Move Beyond Food?
Health
Calorie-Restricted Diets May Not Live Up to the Hype
Health
Why Do Some People Live So Long?
Health
The Science Behind Fasting Diets
Health
Do 3,500 Calories Really Equal a Pound of Fat?
Health
Feeling Sleepy After a Thanksgiving Meal? It Might Not Be the Turkey
Recommendations From Our Store
My Science ShopDiscover STEM Kits
My Science ShopDiscover 2022 Calendar
My Science ShopStrange Science
My Science ShopElements Flashcards
Shop Now
Stay Curious
Join
Our List