Few mothers from a 19th-century dairy farming village in the Netherlands breastfed their children. In a new study, researchers aimed to find out why. 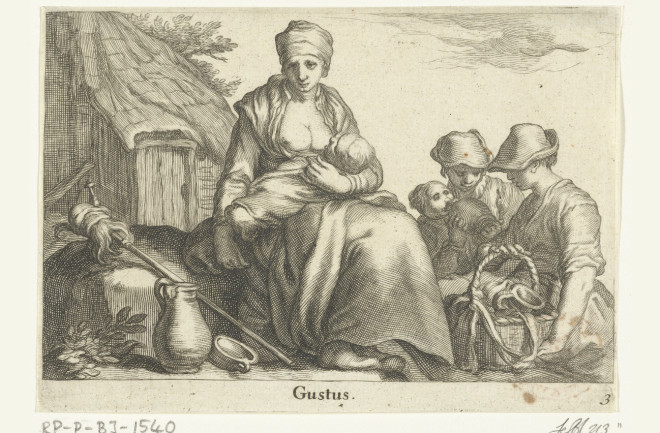 It’s a turn of phrase many new parents are familiar with: “Breast is best.”

In fact, the American Academy of Pediatrics recommends parents breastfeed their babies for at least the first year of life, and the World Health Organization even advises against the use of bottles, artificial teats and pacifiers. Yet 74 percent of American infants receive at least some formula by the six-month mark, according to the CDC’s 2020 Breastfeeding Report Card. Now, amid a nationwide formula shortage in the U.S., those parents who do opt for a baby bottle — for reasons ranging from health problems to the demands of working outside the home — face intensified scrutiny.

“We know, going back thousands of years, that there have been alternatives to breastfeeding,” says Andrea Waters-Rist, an associate professor and bioarchaeologist at Western University in Canada. Though these substitutes were never the norm, “there's no singular pattern in the past that anyone can say would have been the 'natural' or the 'right' way to breastfeed and wean,” she adds.

In a PLOS ONE study published last month, Waters-Rist and her colleagues examined the remains of hundreds of people from Beemster, a 19th-century dairy farming village in the Netherlands. They aimed to uncover the factors behind its exceptionally low breastfeeding rates. Now, their findings add evidence to the fact that breast milk alternatives are by no means a modern invention — and neither are the reasons for utilizing them.

Feel It in the Bones

Waters-Rist became involved with the project more than a decade ago, while still an assistant professor at Leiden University in the Netherlands. When the centuries-old Dutch Reformed Church in Middenbeemster (the principal town in what was once Beemster) announced its expansion into a cemetery located on its south side in 2011, the community sought out a partner who might excavate and study their ancestors.

“There were many more skeletons than were initially anticipated,” says Waters-Rist. Over the course of just six weeks, she and her colleagues exhumed around 500 skeletons. “In some cases, there would be seven, eight, even nine people on top of each other in a burial pit. It was quite an undertaking,” she says.

The researchers initially hoped to learn more about the diets of the 19th-century residents of the village by analyzing the different forms of carbon and nitrogen within their remains. These matter because nitrogen isotope ratios reflect how much protein a person ate during their lifetime, while carbon isotope ratios can also indicate the carbohydrate and fat components of that individual's diet. “The idea is simply ‘you are what you eat,’” says Waters-Rist. Although isotope ratios are found in all sorts of tissues in the body — including skin, muscle, fingernails and hair — those found in bone linger for much longer.

To determine the breastfeeding practices of the nearly 90 infants and children they excavated, the researchers sampled the middle of each long bone (where older bone collagen resides) and its end (where newer bone collagen forms). Consuming breast milk leads to an increase in both nitrogen and carbon isotope ratios that is permanently recorded in new bone growth, allowing Waters-Rist to detect which children were likely breastfed and for how long.

She knew from historical records that Beemster checked off the same boxes as other breastfeeding communities of the time: a mainly Protestant population; mothers who worked in or near the home; and moderate socioeconomic statuses. Yet the bones revealed a surprising divergence from that narrative.

As it turned out, 75 to 90 percent of infants younger than 11 months showed no evidence of having been breastfed — a trend that continued across all age groups. Potentially every 2-year-old, as well as the vast majority of remaining children under the age of 6, also lacked evidence of breastfeeding. Even among those who were breastfed, more often than not it only occurred for a short few weeks or months.

“Such a low prevalence of breastfeeding was really something I'd never seen before,” says Waters-Rist. “If it was just something being practiced by some families and not others, I wouldn't expect to see the data that we received.”

Working Against the Clock

Across archaeological sites, researchers have found the shortest breastfeeding periods in European post-Medieval populations. These mothers lived in large, rapidly industrializing urban centers, were largely lower-class and worked outside the home. Yet even they didn’t finish weaning their children until around the first year after birth. A similar phenomenon hadn’t been found in a rural population — until now.

For Beemster women, the average workday was often 12 to 16 hours long (plus a half-day on Sunday). While their husbands tended to cattle or sold wares in nearby villages, the women were in charge of milking, producing dairy products, preparing meals, completing domestic chores and rearing children. “Some of these women were having six, seven, eight, 10 children — there are very many children they should be looking after,” says Waters-Rist, suggesting that the high workload could have been an important factor in mothers’ decisions not to breastfeed or to wean their infants at a very young age.

Perhaps most importantly, these families lived in the age before refrigeration: A ready supply of fresh cow’s milk served as a breast milk alternative that older children could easily feed to their younger siblings while mom was busy. After all, by the time children reached about four to five years of age, Waters-Rist explains, they were already expected to take on a number of such responsibilities around the farm.

And milk wasn’t the only option on the menu. Elevated carbon isotope values in some of the childrens’ remains shed light on the foods potentially used to wean, including a semisolid mixture made from flour, bread or cereals, called ‘pap’ or ‘porridge.’ Families cooked the pap in water, milk or broth and often added sugar. “There are lots of reports of different types of devices [used] to deliver to an infant something like pap,” Waters-Rist adds.

Despite these lines of evidence, it’s difficult to draw hard-set conclusions. For one, bone collagen isotope values can be influenced by much more than just diet, including the metabolism and general health of both mother and child. These co-occurring variables are sometimes impossible to completely disentangle, write the study’s authors.

Additionally, it’s possible that the results may be skewed because the researchers only examined children who died at or before the age of 6. In fact, according to some historical records, around a quarter of Dutch infants died within their first year of life during the 19th-century. This phenomenon prompted investigations into the causes of such devastating infant mortality rates, which ultimately found that a lack of breastfeeding — combined with unhealthy breast milk alternatives and harmful weaning practices — were to blame.

Read More: How the 'First 1,000 Days' Could Shape Your Baby's Future

“There were a lot of challenging decisions that had to be made in the past, just as there are in the present,” says Waters-Rist, adding that, thankfully, the use of modern-day baby formulas leads to a very healthy infant. “We're not talking about 100 or 200 years ago, where the risks of infant mortality would absolutely skyrocket with the introduction of any type of artificial food prior to six months of age.”

For future research, Waters-Rist says she is turning to archival records from the Dutch Reformed Church and the historical census data that is stored in various government buildings in North Holland. Together, the two sources could be used to reconstruct this past infant mortality rate and potentially reveal its relationship to breastfeeding practices. In addition, she and her colleagues plan to analyze the teeth of the cemetery’s adult remains to elucidate whether those who survived to older ages also skipped out on breastfeeding.

Such analyses could fill a significant knowledge gap. For too long, the lives of women and children were under-researched, she says: “It's taking a long time to remedy that viewpoint and to demonstrate to both the academic field but also the general public that it is important to understand how babies were being fed, how children were being reared and what possibilities existed for women.”

Liquid Meal Replacements: Can We Move Beyond Food?

Calorie-Restricted Diets May Not Live Up to the Hype

Why Do Some People Live So Long?