Cooking in the kitchen can alter the quality of the air that you breathe, affecting your body in adverse ways. 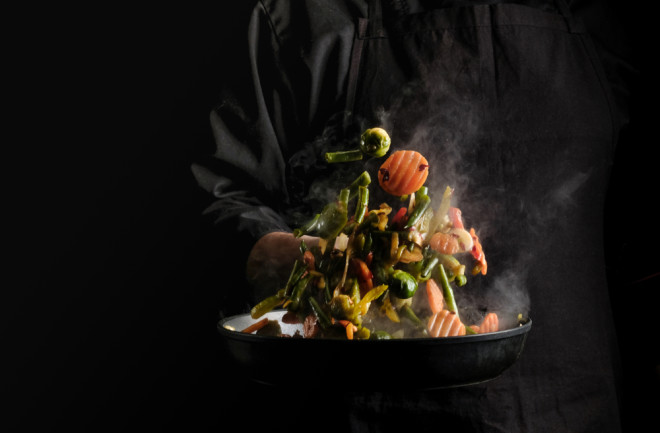 This article was originally published on Jul. 7, 2021, but has been updated with recent information.

Can cooking be detrimental to your health? Scientists say yes.

A paper published in December 2022 states that cooking on gas stoves accounts for 13 percent of childhood asthma cases in the U.S. Sending out a shower of polluting particles into the air, these cooktops pose a “significant public health burden,” according to the study.

The Consumer Product Safety Commission swiftly responded to these results, announcing its plans to strengthen voluntary safety standards for these stoves in January 2023. Yet, this concern about the potential risks involved in cooking isn’t completely new.

Like many people, Stephanie Holm made holiday cookies with her family in 2020. Her daughter found a recipe on the internet, and the two of them set to making the treats in the kitchen of their apartment.

Together, they mixed the dough, rolled it out, put the cookies on a pan and popped it in the oven — “literally covered in sprinkles on the outside … cute, and very delicious,” says Holm, a pediatric environmental medicine specialist at UC San Francisco.

But as the cookies baked, Holm noticed that the cute sugary coating burned a little in the oven, though not enough to ruin the cookies. Then Holm heard her daughter exclaim, “Mama, it’s purple!” and she saw that the air quality sensor she keeps in their apartment had indeed turned from green (good air quality) to purple (very unhealthy). Could a single batch of slightly singed cookies have been to blame?

What happened with Holm’s cookies wasn’t a fluke. All cooking releases a complex mixture of chemicals, some of which would be classified as unhealthy pollutants. As for whether cooking is hazardous to your health — the short answer is, it depends. But generally, if you have good ventilation, you should be fine.

“We all cook, and the average life expectancy is 78 or 79 years old. So we shouldn’t get too worried,” says Delphine Farmer, an atmospheric chemist at Colorado State University. “But it is an opportunity to think about how to reduce your exposure to pollutants.”

Out of the Frying Pan

Farmer’s research found that cooking releases a mixture of hundreds of different chemical compounds into the air. Every ingredient gives off its own unique blend of particles and gases. Proteins in meat can break down and give off ammonia. Roasting can produce isocyanates. Oils from frying and sautéing can aerosolize (that’s how your counters end up with a fine layer of grease on them). The airborne molecules can continue to react and change as they drift around your kitchen and bump into each other.

“You can see some of these really interesting compounds,” Farmer says. “But are they at levels that are toxic? We don't know.”

Part of the uncertainty when it comes to health effects comes from the fact that most air quality studies and standards are based on outdoor air — despite our world where people today spend an estimated 90 percent of their time indoors. While Canada and the World Health Organization have indoor air quality guidelines, the U.S. does not.

In general, indoor air chemistry fluctuates a lot more than outdoor air. The average air quality can be good, but as Holm and her daughter experienced, some activities — like cooking and cleaning — can cause dramatic changes. Pollutant levels will spike in the kitchen while cooking is actively happening and then drift back down as the airborne molecules disperse.

Acquiring that scientific data is no easy task. Variables that can affect cooking fumes and their contents include how often a person cooks, what they cook, how they cook it, what kind of appliance they use, what kind of ventilation they have and maybe even the type of pots and pans they use, says Iain Walker, an engineer at Lawrence Berkeley National Lab who studies home air quality and ventilation. The best researchers can do is try to gauge the relative impact of each factor: gas stove or electric? Boiling or frying? Meat or vegetables? Nonstick pan or stainless steel?

Read more: Standing Next to Your Microwave Isn't Dangerous

The main pollutant of concern linked to cooking is particulate matter. This catchall term refers to a complex mix of microscopic solid bits and ultrafine liquid droplets that could be made up of hundreds of different chemical compounds. The chemistry doesn’t matter nearly as much as the size. Particles smaller than 10 microns (less than 1/5 the width of a human hair) can make their way into the lungs and lodge there. Even smaller particles can make their way into the bloodstream.

Particulate matter is the reason you don’t want to breathe in smoke or car exhaust. Chronic exposure to high levels of particulate matter exacerbates asthma, but also makes it more likely that a child will develop asthma, says Holm. It’s also linked to changes in childhood growth, metabolism and brain development, and it’s classified as a carcinogen by the WHO.

All cooking produces some particulate matter in the form of aerosols and tiny bits of char generated from food and dust being heated up. If you can smell burning, you’re likely breathing in quite a bit of particulate matter. “Anything with a red-hot element is going to generate particles,” says Walker. That includes most stovetops, ovens and even small appliances like toasters. Frying and roasting cook methods both produce a lot more particulate matter than boiling or steaming. And fatty foods give off more than veggies.

Gas stoves are particularly bad for indoor air quality. Not only do they produce more particulate matter by virtue of creating an open flame, but the actual fossil fuel combustion also generates other gases, such as carbon dioxide and nitrogen dioxide. From a health perspective, the thing that raises the biggest concern in this scenario is nitrogen dioxide.

Nitrogen dioxide, like particulate matter, contributes to breathing problems like asthma and is regulated in outdoor air. The gas has also been linked to heart problems, lower birth weight in newborns and shorter lifespans for people who are chronically exposed.

A 2016 study from Lawrence Berkeley National Lab found that simply boiling water on a gas stove produces nearly twice the amount of nitrogen dioxide as the EPA’s outdoor standard. Considering that about a third of American homes use natural gas for cooking, that’s a lot of potential exposure.

“Somehow, we've just become used to an unvented fossil fuel device in our homes,” says Brady Seals, who manages the carbon-free buildings program at the Rocky Mountain Institute, a clean energy think tank. She wants to raise awareness of nitrogen dioxide’s health risks as a way to discourage natural gas use in homes.

And she’s not alone in this mission. The Massachusetts Medical Society passed a resolution in 2019 to recognize the link between gas stoves and pediatric asthma. Several cities in California, including San Francisco, have passed bans on natural gas in new construction, citing both climate and health hazards.

If you have a gas cooktop, Seals and Walker recommend swapping it out for an electric one if you have the means and ability to do so. “Not only are you reducing carbon impact [on the environment], but you can have a healthier home if you get rid of combustion appliances,” Walker says.

The best option from both an energy-efficiency and air-quality perspective, he says, is an induction stove, which uses magnets to transfer heat directly to your pots and pans. No red-hot elements means less particulate matter. If you can’t replace your gas stove, Seals recommends a plug-in induction cooktop.

Realistically, few people are going to swear off stir frying or using their oven for the sake of producing less particulate matter. “Everybody’s going to cook what they’re going to cook,” says Farmer, noting that people use whatever kitchen appliances they have. That’s why all these experts stress the importance of good ventilation.

Holm was part of a 2018 study looking at particulate matter in the homes of children with asthma. One of the most surprising findings: In homes that never used a range hood or range fan, people were exposed to unhealthy levels of particulate matter for roughly 10 percent more time than in homes that used range ventilation.

Walker, the ventilation expert, recommends that people should use a high setting on their kitchen range hood whenever possible, since the quieter low settings capture only about half of pollutants. Since most range hoods don’t extend over the front burners, you might want to consider using the back burners, especially if you have a gas stove. Walker also advises that people keep the ventilation on for about 15 minutes after they’re done cooking. That’s about how long it takes for all of the air in the room to be replaced. But that only applies if your vent is sending fumes outside, which is not often the case.

Unless you have a new, higher-end kitchen and stove, your built-in range ventilation might essentially be a fan. It’s just pushing the fumes around the room, which helps disperse the concentration of pollutants more quickly but doesn’t actually remove them from your house. Many homes and apartments, including Holm’s, don’t even have that option. In that case, Holm recommends opening some windows if the outside air quality is good, or using a portable air purifier with a HEPA filter.

In the end, there are still a lot of unknowns about how cooking fumes affect us. To some extent, we simply have to accept them as a byproduct of enjoying our favorite foods, much like we accept pet hair as a part of having a furry friend. “You start realizing how pollutants are a part of our life,” Seals says. “Let’s reduce pollution wherever we can. But I’m not going to give up my dog and I’m not going to stop cooking.”

[Correction: A previous version of this story erroneously stated the findings of Holm's 2018 air quality study and the type of portable air purifier that Holm recommends using in homes. We apologize for the errors, which have been corrected in this current version.]