Exposure to the herbicide named Agent Orange still causes harmful health effects to humans and may continue to for generations. 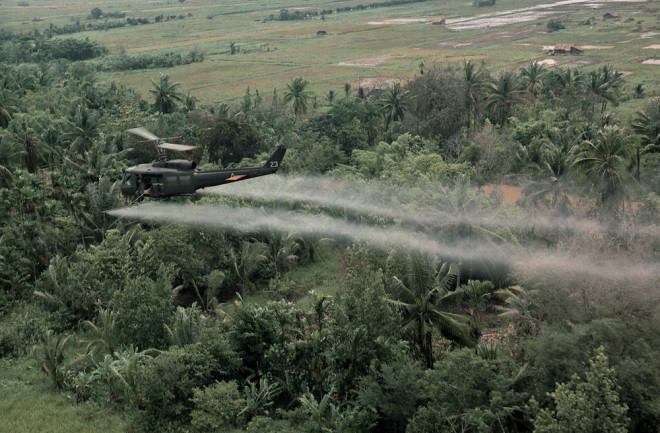 In late 2019, a representative from Disabled American Veterans appeared before a congressional subcommittee and spoke of an ailing sailor from Missouri named Bobby. Having served in the Vietnam War, Bobby was exposed to Agent Orange, a potent herbicide used to kill foliage in the dense jungles.

In 2011, Bobby was diagnosed with prostate cancer. He also had Type 2 diabetes — both illnesses have been seen in other veterans exposed to Agent Orange. Though scientists now know that Agent Orange can still impact a person without direct contact, they are continuing to learn about the long-term effects of the deadly herbicide — including both environmental and medical.

In some instances, it may take generations for the deadly dioxins to fade.

Dioxins are highly toxic to humans, animals and the environment. The U.S. military sprayed 11 million gallons of Agent Orange and eight million gallons of other herbicides in Vietnam and Laos. It has affected both the people and the land for generations.

The U.S. military began experimenting with herbicide formulas during World War II when military chemists considered ways to ruin enemy crops. Military officials weren’t certain whether herbicides were considered chemical warfare, which was a violation of the Geneva Convention, and the U.S. opted not to attack Japanese rice fields.

Research continued, however, and chemists sought rapid ways to defoliate dense jungle areas. They tested chemicals in the Florida Everglades, but the formulas proved slow and ineffective.

As the U.S. began strategizing a military response in Vietnam in the early 1960s, they also considered how they could use an herbicide. Vietnam had several types of vegetation. There were triple-canopy tropical rain forests, as well as seasonal forests with hardwoods. The shorelines and swamps had mangroves, and some areas were covered with tropical scrub. Military officials wanted to use herbicide to clear vegetation  to prevent an enemy ambush. They also wanted to open areas for logistical purposes such as building roads, bases and other military infrastructure.

The diverse vegetation meant the military had more than one herbicide formula. The herbicides were stored in barrels and color-coded. The most well-known mixture, Agent Orange, was used for all the herbicides.

In Operation Ranch Hand, the U.S. military sprayed herbicides using a variety of methods. At times, slow-moving and low-flying planes sprayed the chemicals. They also sprayed herbicide from boats, and in some instances, soldiers used hand sprayers and walked among the foliage.

Because of this, the military exposed millions of American service members and local residents to the dioxins in the herbicides. In the late 1960s, scientific reports warned against environmental harm from herbicide use. The U.S. military contended that defoliating reduced guerilla attacks and saved American lives. They only stopped the after they found that lab mice exposed to the chemical elements in the herbicide delivered deformed and stillborn babies.

Scientists soon realized the impact of the herbicide. At the time, researchers thought direct contact was necessary for the herbicide to affect a person. It took years for scientists to better understand the toxin’s extreme potency.

Before the Agent Orange Act of 1991, scientists concluded there was minimal aerial drift from the herbicide, and that Agent Orange would not affect sailors on ships miles from the coastline. In 2013, researchers found that Agent Orange had been sprayed over waterways, and the contaminated water and sediment eventually spilled into the sea.

The VA now recognizes sailors like Bobby who were on ships near the coastline and exposed to Agent Orange. The herbicide was presumed to cause a growing list of diseases and illnesses.

The list began in the late 1970s when scientists associated Agent Orange exposure with the development of soft-tissue sarcomas. Soon, Hodgkin’s disease and non-Hodgkin’s lymphoma were seen among servicemen exposed to Agent Orange. The list also includes prostate cancer, respiratory cancers, chronic b-cell leukemia, multiple myeloma and diabetes. The list is ongoing as more associations are made, and they added three new diseases  — bladder cancer, hyperthyroidism and Parkinson’s.

The list of ailments will continue to grow, especially in Vietnam and Laos where the dioxin continues to impact the people. Studies show that the dioxin does not degrade easily. When buried in tropical soil, it can take as many as 50 years to degrade by 50 percent. In river and sea sediment, the half-life degradation can take more than a century, which means the herbicide may still harm generations to come.

Neanderthals May Have Used Animal Skulls as Decor

Why the Human Brain Takes Decades to Develop