Combat Cognitive Decline With These 5 Activities

From meditation to physical activity, these evidence-based activities have shown to improve your cognitive health and prevent cognitive decline while aging. 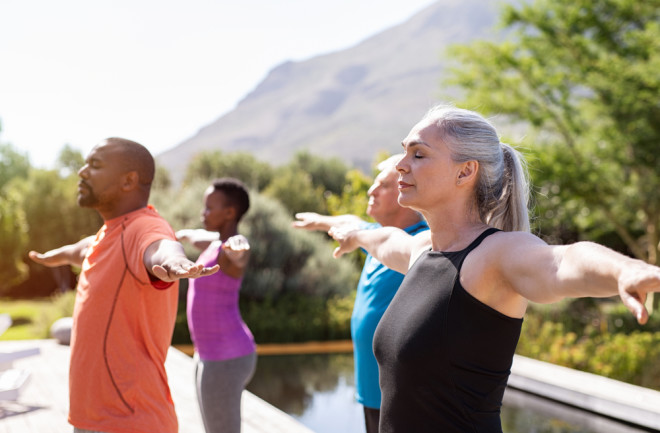 This article was originally published on November 23, 2021.

If your days consist of inadequate sleep, excessive screen time, and little to no physical activity, then you might be harming your health in more ways than one. Although these factors are commonly known to be detrimental to an individual’s physical and emotional health, they have an impact on your cognitive health, too.

According to the National Institute on Age, cognitive health, or "the ability to think, learn, and remember" well, is crucial in everyday function. Something as basic as communicating with another person, paying attention, or remembering information involves different types of cognitive processes that occur unconsciously. You might think it’s too early to be concerned about your cognition, but research shows that engaging in mentally stimulating activities throughout your life is associated with slower late-life cognitive decline.

How to Prevent Cognitive Decline?

Contrary to what they claim, computer-based cognitive-training software, or popular brain training mobile applications, aren’t scientifically proven to delay cognitive decline or protect against mild cognitive impairment. Here are five activities that you can do instead to prevent cognitive decline.

Learning a new language comes with cognitive benefits because it is a complex process that stimulates different areas of the brain, says David Copeland, an associate professor of psychology and director of the Reasoning and Memory Lab at the University of Nevada, Las Vegas. Getting to know the syntax and semantics of another language, forming new grammar structures and acquiring vocabulary all require immense and consistent mental effort.

A 2019 study found that a four-month-long language learning program may preserve brain plasticity and improve mental functioning in aging individuals. Additionally, intense language studies can increase cortical thickness and hippocampal volumes of the brain, which are associated with general intelligence and declarative memory performance.

People often assume that knowing more than one language will confuse the brain and complicate cognitive development. In reality, actively utilizing two or more languages helps you protect your brain against cognitive decline.

Numerous studies have investigated the effects of meditation on cognition, and a 2014 systematic review suggests that it may offset age-related cognitive decline. Different brain regions get activated when you meditate, including the neural structures involved in attention, which might explain why four to five days of meditation training can enhance the ability to concentrate on a specific stimulus while tuning out other distractions. Moreover, research suggests that long-term meditators have more folds in the outer layer of their brain compared to those who don’t meditate, potentially increasing their ability to process information.

Not only does regular exercise boost physical fitness and prevent chronic diseases, but it can also improve brain health. A 2011 study found that exercise training may improve memory function because it increases the size of the hippocampus, the part of the brain involved in forming and storing new memories. In addition, a 2017 study demonstrates that physical activity also increases cerebral glucose metabolism in the brain regions that are important for learning and memory, possibly helping combat Alzheimer's disease.

A rich body of research demonstrates how physical fitness prevents cognitive decline, and that many different mechanisms are thought to be at play. Promoting neuroplasticity, improving vascular health — a factor that affects cognitive function — and stimulating brain growth factors involved in protecting or increasing neuron health, may be behind these exercise-induced benefits, says Laura D. Baker, professor of internal medicine, neurology, and public health sciences at Wake Forest School of Medicine.

The act of reading is a cognitive process involving comprehension, deductive reasoning and critical analysis, which activates several areas in the brain and keeps you mentally stimulated. According to a 14-year longitudinal study, reading at least twice a week is associated with a reduced risk of cognitive decline. The researchers also suggested that reading may increase cognitive capital to resist aging-related loss of cognitive function. Although more research is needed to assess whether reading directly prevents cognitive impairment, engaging in intellectually stimulating activities can slow age-related decline in memory and thinking abilities.

“Social interaction is believed to be as important to brain health as is cognitive stimulation,” Baker says. “It is another form of enrichment that can lead to increased brain activity in regions critical for memory and attention.” Research shows that having a socially active lifestyle in late life delays memory loss and protects against dementia and Alzheimer's disease. The increased social and emotional support may enhance cognitive performance as well.

Having a small social network and infrequent social interaction, otherwise known as social isolation, is associated with decreased cognitive function and increased memory decline. It also increases the risk of depression, a condition that can reduce cognitive performance and impair memory. Therefore, maintaining regular interaction with your social network through get-togethers and phone or video calls is crucial for your health.

“Because our brains evolved as social animals, we typically need social interactions for healthy brain stimulation,” Copeland says. “Conversations are much more complex than we think they are.”

More From Discover
Health
10 Science-Backed Ways to Boost Your Brain
Health
Why Walking Might Be One of the Best Exercises For Health
Health
Why Do Some People Live So Long?
Technology
Life After Death? Cryonicists Try To Defy Mortality By Freezing Bodies
The Sciences
Inside The Brains Of Aging Dogs
Health
New Study Finds Men May Outlive Women Instead
Recommendations From Our Store
My Science ShopDiscover STEM Kits
My Science ShopDiscover 2022 Calendar
My Science ShopStrange Science
My Science ShopElements Flashcards
Shop Now
Stay Curious
Join
Our List