What Are Flash Droughts?

Flash droughts are harmful to crops, streams and wells, and researchers are finding them difficult to predict. 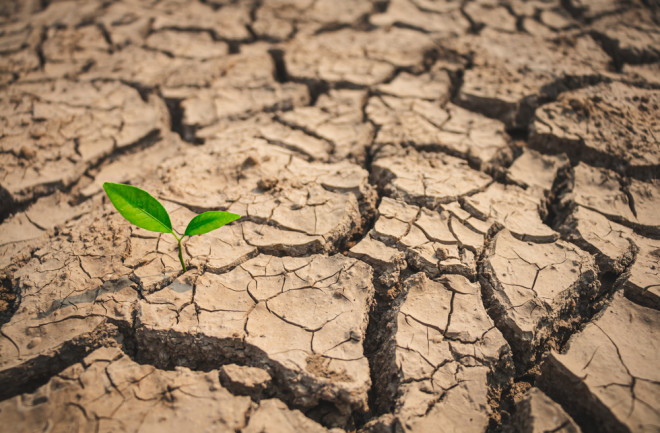 You’ve heard of flash floods, but have you heard of flash droughts? These events are relatively new for natural disasters, and come on fast, with conditions going from normal to severely dry in less than one month. This means people have no time to prepare for the consequences, which can include withered crops, dried streams or depleted wells.

There’s been an effort over the past six years to better understand flash droughts, according to Ben Cook, a climate scientist at the NASA Goddard Institute for Space Studies. One goal is to pinpoint early indicators that might help forecast these events and give more warning before they hit.

“The classic view of droughts is that they are slow moving and take a long time to develop,” says Cook. “But like heavy rainfall or floods or heat waves, flash droughts are very quick — all of a sudden, you're in it.”

A well-documented flash drought swept across the central U.S. in 2012. Normal winter and spring precipitation lulled farmers, ranchers, and meteorological forecasters into assuming it would be a normal summer. But it suddenly stopped raining in May, leading to the driest summer in the Great Plains since 1895, eclipsing even the Dust Bowl summers of 1934 and 1936. The drought decimated crops in six states, resulting in $35.7 billion of agricultural loss.

“Many farmers had already planted all of their fields,” says Cook. “In places without irrigation, there was nothing they could do except watch their fields completely desiccate.”

A drought, like the one in 2012, is "a period of abnormally dry weather sufficiently long enough to cause a serious hydrologic imbalance,” according to the American Meteorology Society. It is characterized based on the season it occurs, the type of water it’s limiting (snow, rain, groundwater), or the impact it has on different sectors (agricultural, cultural, ecological).

For instance, a snow drought could reduce drinking water supplies for a community during the summer. And an agricultural drought could affect specific crops, while a multi-decadal megadrought could cause ecosystem-wide vegetation shifts.

Flash droughts have an unusually rapid onset and deplete water availability — particularly soil moisture — in a few weeks, or even a few days. Above-average temperatures paired with a lack of precipitation typically cause them.

“A warmer, drier atmosphere sucks more moisture out of the soil and plants, all else being equal,” says Cook. "When you add in a precipitation deficit, it accelerates drying on the surface.”

The 2012 disaster inspired researchers to concentrate on flash droughts. In a study published in 2021, Cook and his colleagues used tree ring data, paired with soil moisture data and the principal atmospheric circulation pattern. They then reconstructed the frequency and magnitude of flash droughts in the Central Plains over the past 500 years. While they found significant century-to-century variation, the model showed that over one-third of all flash droughts since A.D. 1500 occurred in the 20th century.

Another study published in 2021 found that global warming is shifting the timing of the hydrological cycle: Peak soil moisture or snowmelt runoff is happening earlier in the year. That means that places like the Great Plains can expect drier conditions earlier in the summer that last longer into the fall. Plus, even in places where the total amount of precipitation is not expected to change, Cook says some regions may experience more consecutive dry days between rain events — priming the pump for more frequent flash droughts.

“All the evidence strongly suggests that a warmer world translates to a dryer western North America,” says Cook.

An article published this year in Nature examined spatial patterns of where flash droughts developed globally from 2000 to 2020 and drew the same conclusions. Researchers determined that atmospheric aridity combined with soil moisture depletion will “create a flash drought-prone environment.” While rapid drying isn’t occurring more frequently in most global regions, they did find evidence of flash droughts coming on faster: 33 to 46 percent of global flash droughts in the past 20 years developed within just five days.

However, while science is giving some insights into where and how these rapid dry outs happen, we still don’t know how to predict them.

“We know the physical ingredients that cause flash droughts, but we don’t really understand what triggers them in the soil column,” says Justin Mankin, a geography professor at Dartmouth College and co-lead of the National Oceanic and Atmospheric Administration's Drought Task Force.

Part of the reason flash droughts are difficult to forecast is because there’s a lack of on-the-ground monitoring, including real-time measurements of soil moisture. And this is not just in the U.S., but globally, explains Mankin. Tools like the U.S. Drought Monitor rely on satellite imagery of vegetation as well as other geophysical data. But they only provide a guess of soil moisture, rather than showing what's happening beneath the surface.

“Plants are doing the majority of the water exchange between the land and the atmosphere,” explains Mankin. “That exchange is happening in what we call the root zone about a meter underground, which is difficult to monitor from a satellite.”

According to Mankin, installing integrated networks of in-situ soil moisture observations would provide better benchmarks for drought forecasting models, including their representation of plant-soil water interactions. This might help people prepare for a flash drought. For instance, with enough warning, a rancher could look for alternative feed options for livestock before a pasture dries out, or a farmer might harvest crops early before they wither.

“The forecasting tools we have for longer-term droughts are just not sufficient for anticipating these flash events,” agrees Cook. “A warmer world makes the atmosphere drier, increases moisture losses from the surface, and leads to a much drier baseline. That’s obviously going to have ramifications for water resources.”

Whether droughts come on slowly or happen in a flash, carefully tracking the water stored in soils, snowpack, streams and aquifers will help us mitigate their impacts on our communities.

What is Bird Flu, And Why is it So Severe This Year?

Why It Takes Decades To Breed New Apple Varieties