Washing and Drying Machines are Polluting the Air

A new study confirms dryer machines are an equal threat to the environment as washing machines. 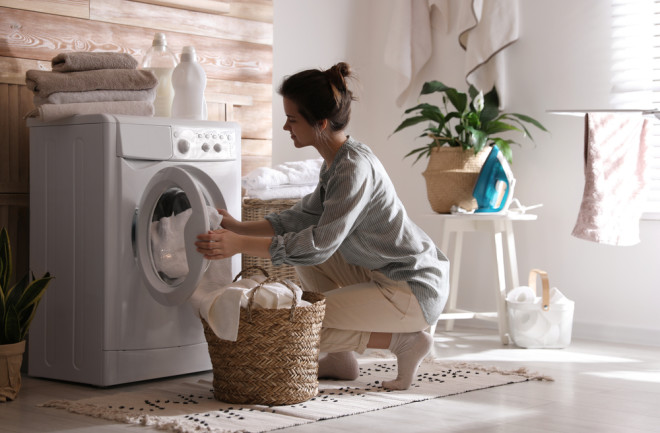 While we are cleaning our clothes, we are polluting our air. A typical U.S. household does about 300 loads of laundry every year and because our cleaning habits are bad for the environment, scientists want us to cut back.

Not only does washing our clothes this much use an excessive amount of energy, it also spews out tons of carbon dioxide. This is bad for the environment, and it wears down our clothes, which adds clothing to our landfills. Researchers report that the E.U. alone produces 2.2 million tons of “textile waste” each year.

Drying Just as Bad as Washing

Up until now, researchers have mostly focused on the negative effects of washing machines on the environment. Now, a new study suggests that tumble drying is just as bad.

First, this is what we know about washing machines:

And second, we now know that drying one load of laundry in a residential dryer is equally as bad for the environment as doing one wash load, suggests a new study published in the scientific journal, PLOS ONE, earlier this year. A team of scientists at Northumbria University and scientists at Procter & Gamble (P&G) conducted the research and found that a drying cycle releases the same amount of potentially harmful microfibers into the air as a wash load releases into the water system.

Even before this study came out, the Natural Resources Defense Council (NRDC) were calling for more environmentally and energy efficient dryers.

“Clothes dryers are arguably the most important of all residential appliances in need of an energy efficiency upgrade,” writes the NRDC in a June 2014 paper.

“Of the washer-dryer pair, clothes washers have received more attention with a complete makeover over the past two decades. Nearly half of all models now open from the front rather than the top, which allows them to spin more water out of the clothing and reduce energy and water consumption,” the NRDC states.

While the team researched the impact of dryers on the environment, they also found that the dryer sheets and fabric softeners could reduce the release of microfibers during tumble dryers. Scientists at the University of Washington published research a decade ago in the journal, Air Quality, Atmosphere and Health, showing that liquid laundry detergent and scented dryer sheet contain hazardous chemicals — including two that are classified as carcinogens — that a drying cycle releases into the air.

The Northumbria and P&G study measured the output of microfibers in loads totaling 1,200 garments. It found that if a link filter had smaller pores, it could trap the microfibers better. That means drying cycles would spew less hazardous material into the air.

In a press release reporting on the study, Dr. Kelly Sheridan, an expert in textile fibers at Northumbria University, says, “It is critical to our understanding of the impact of microfibers on human health and the environment that all the potential pathways for microfiber release, including air, are assessed. Airborne fibers are just as concerning as those present in wastewater.”

In tandem with their new research findings, researchers are calling on the appliance industry to improve the efficiency of filtration systems in vented dryers.

"The recent rises in energy costs have led us all to think carefully about the financial impact of using dryers, but few are aware of their impact on particulate air pollution,” says Dr. Neil Lant, a research fellow at P&G and lead scientist on this study.

According to the NRDC, a clothes dryer is responsible for approximately six percent of the average home’s energy use.

More From Discover
The Sciences
The Reason Why 2,000-Year-Old Roman Concrete is Still so Strong
Technology
Determining Nuclear Fusion's Future
Technology
When Electric Vehicles Go Mainstream
Planet Earth
The Real Reason Global Fish Stocks Are Declining — And What You Can Do About It
Environment
5 Ways To Conserve Energy This Winter
The Sciences
World War II Relics And Hunger Stones Emerge In European Drought
Recommendations From Our Store
My Science ShopDiscover STEM Kits
My Science ShopDiscover 2022 Calendar
My Science ShopStrange Science
My Science ShopElements Flashcards
Shop Now
Stay Curious
Join
Our List