The Heat Just Goes On and On and...

With Europe under a "heat apocalypse" warning, the latest monthly climate climate analyses are out. Can you guess what they say? 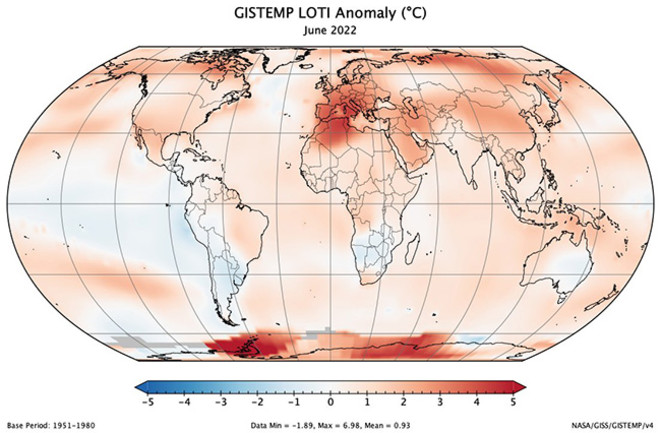 Here is how temperatures varied from the long-term average around the globe last month — which by NASA's analysis was the second warmest June on record. Warmer than normal temperatures dominated most of the globe. An anomalously cool swath of ocean along the equator in the Pacific Ocean is one exception — the result of an ongoing La Niña episode. (Credit: NASA GISS)

Some 35 million people in the United States have been under heat alerts today, and what's been described as a "heat apocalypse" is unfolding in Europe. With that in mind, the latest monthly climate analyses may not seem very significant, but they are a reminder of something important:

When the heat waves fade, the wildfires subside, and some sense of normalcy returns, global warming will still be with us, month to month, year to year — and action is needed now if we are to avoid its worst impacts.

In its most recent monthly analysis, NASA's Goddard Institute for Space Studies found that last month tied for second warmest June in records dating back to 1880. An independent analysis by NOAA showed a somewhat different result, with the month coming in as Earth's sixth warmest June on record.

The discrepancy is less significant than it may seem. It's mostly due to differences in how the agencies determine temperature shifts in the polar regions, where weather monitoring stations are sparse, according to Gavin Schmidt, director of NASA GISS. Both agencies use nearby stations to interpolate temperatures in areas lacking stations — and the method employed by GISS is simply a bit more aggressive than NOAA's.

Schmidt also points out that "uncertainties in monthly numbers are quite large, and the rankings are fragile, so I wouldn’t make too much of this."

If that 1.6 degrees of June warming does not seem like a lot, keep keep in mind that it's a global average. At a regional level, the effects of a changing climate often manifest in more extreme ways — as devastating spring and summer heatwaves in different parts of the world have shown.

High-pressure circulation in the atmosphere acts like a dome or cap, trapping heat at the surface and favoring the formation of a heat wave. (Credit: NOAA)

In the United Kingdom, the intensifying heat has prompted authorities to declare a national emergency and issue a first-ever “red extreme” heat warning for a large part of England.

“We hoped we wouldn’t get to this situation but for the first time ever we are forecasting greater than 40°C in the UK," climate scientist Nikos Christidis of the UK Met Office says in a statement. In Fahrenheit, that's above 104 degrees. And the forecast for Tuesday in London is a Vegas-like 106 degrees F.

Across the English Channel, French authorities have issued similar warnings, with the southwestern part of the country forecast to be especially hot. "In certain zones in the southwest, it will be an apocalypse of heat," forecaster Francois Gourand of Meteo-France told Agence France-Press .

Over the western and central United States, a heat dome is also sending temps soaring. Under the high pressure of a heat dome, air sinks, causing temperatures to rise and cloud cover to be scanty.

Heat waves do occur naturally, of course. But in recent decades, Earth has experienced an increase in the frequency, duration, and intensity of heat waves, a pattern linked directly to human-caused global warming.

"The chances of seeing 40°C days in the UK could be as much as 10 times more likely in the current climate than under a natural climate unaffected by human influence," Christidis notes.

Research shows that those elevated odds truly are being felt globally. To offer just one example, a deadly heatwave that gripped India and Pakistan last March and April was 30 times more likely due to human-caused climate change, according to a recent analysis of the event.

Our influence on the global climate over the long run can be inferred from the statistics cited by NOAA in its analysis for June. Last month was the 46th consecutive June, and the 450th consecutive month, with temperatures above the 20th-century average.

"The ten-warmest Junes on record have all occurred since 2010," according to NOAA.

How will this year ultimately pan out? Although 2022 is unlikely to go down as the warmest year (thanks in no small measure to the ongoing cooling influence of La Niña), NOAA says there's a greater than 99 percent chance that 2022 will rank among the 10 warmest years on record.

One might think that heat waves, ongoing megadrought in the Southwestern United States, an epidemic of wildfires, and the overall rise of global temperatures over the long run, would galvanize public opinion on climate change. But recent polling suggests that myriad other serious issues are capturing the attention of many Americans, at least for now.

In a recent New York Times/Siena College poll, only 1 percent of voters ranked climate change as the most important issue facing the country. Those polled were far more concerned about inflation and the economy.

In an earlier poll by the Center for Climate Change Communication, 4 percent of registered voters ranked climate change as their most important issue. That made it the 10th highest ranked most important issue, behind the economy, free and fair elections, inflation, abortion, and a variety of other issues.

I asked Gavin Schmidt, head of NASA GISS, what he made of these polling results. He framed his answer in terms of media coverage, and I think what he had to say is quite interesting. So here is his response in full (and I should note that he emphasized these were his personal opinions, not NASA's):

It will be interesting to see whether climate change edges upward as an issue of concern in future polling, perhaps due to continuing heat waves, wildfires, and the like.

Schmidt also shared some compelling thoughts about how society deals with acute vs chronic issues:

"I used to also make a claim that we deal better (collectively) with acute issues, rather than chronic ones, because I felt that the shared values part of dealing with acute issues was greater, and the disparate values involved in dealing (or not) with climate change made it harder. However, the pandemic and the fallout from Roe v Wade has blown this theory out of the water. We are just terrible at dealing with anything."

Schmidt concluded with this:

"So bottom line, I don't think these 'most important' lists are particularly salient, and I don't think lack of a public concern is the impediment to climate action. The biggest impediment is the GOP's utter unwillingness to have a serious interest in governing beyond 'owning the libs'. The levels of support for basic climate actions far out-poll current GOP priorities (national abortion bans, persecution of trans people, dismantling social security and Medicare, increasing taxes on poor people), and yet no-one asks them why they are pursuing an agenda with such low polling."

Again, these are his personal views, not NASA's.

I'll conclude by noting that with West Virginia Senator Joe Manchin III holding up efforts by Democratic lawmakers to pass federal legislation aimed at curbing climate change, hopes are fading fast that the worst impacts can be averted.