Humanity Has a Trash Problem; Launching It Into Space Isn't the Solution

The good news is promising contemporary technologies may soon improve our ability to sustainably manage waste. 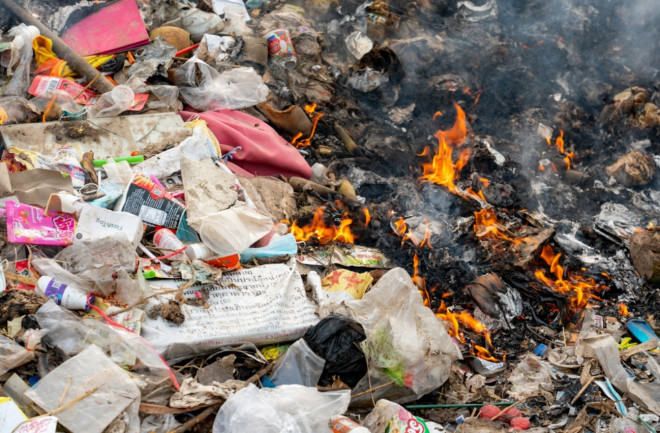 Raccoons are well known for their affinity for garbage (the internet calls them “trash pandas” for a reason), but in reality humans stand out as the trashiest animals on Earth. The average American produced 4.9 pounds of trash a day in 2018, according to the Environmental Protection Agency, and globally we produce 4.5 trillion pounds per year.

This waste ends up in the oceans, in our own bodies, in overflowing landfills  — where it causes a variety of issues, from toxic chemical leaching to garbage landslides — and it’s accumulating constantly. “We’re expecting waste to increase by 73 percent by 2050,” says Silpa Kaza, senior urban development specialist at the World Bank in Washington, D.C.

It’s clear that we can’t launch the trash into space and make it the universe’s problem; it’s just too expensive, with one estimate suggesting such an endeavor would cost $33 quadrillion per year. Even with rocket launches getting cheaper over time, humans simply generate too much waste to be feasibly flung into the stars. But with all this trash piling up on Earth, including more than 550 million pounds of hazardous radioactive waste, what exactly can be done about our gargantuan problem?

There are several promising waste-to-energy technologies on the horizon that could improve our ability to sustainably manage waste. These techniques fall after “reduce, reuse and recycle” on the waste management hierarchy, but before disposal steps such as landfilling. Because waste is so heterogenous, we will always need multiple different methods for handling it.

“There’s never going to be one silver bullet for waste management,” says Taylor Uekert, a postdoctoral researcher at the National Renewable Energy Laboratory in Golden, Colorado. “You’re always going to need a portfolio of technologies.”

One such technology is photoreforming, a process that uses sunlight to turn plastic waste into organic compounds and hydrogen gas that can then be used as a source of clean energy. This technology even works with contaminated plastic waste. “It works with stuff that you wouldn’t be able to recycle otherwise,” Uekert says. It’s definitely a better outcome for plastic than ending up in the deepest parts of the ocean or frozen in arctic ice.

Other technologies — such as pyrolysis, liquefaction, and gasification — use thermochemistry to turn waste into energy. “In pyrolysis we use heat energy in an inert atmosphere … [to turn] solid organic material [into] bio-oil, biochar and gases,” says Sonil Nanda, director of research and development at Titan Clean Energy Projects Corporation in Canada. Liquefaction uses a series of chemical reactions to turn biological material into bio-oil, a green fuel source, while gasification ultimately produces hydrogen gas.

Biochar is a carbon material produced by pyrolysis and other processes, and its stable structure allows it to hold carbon for a long time. It therefore has great potential for keeping carbon out of the atmosphere, where it’s best known for contributing to climate change as the greenhouse gas carbon dioxide.

“It has properties almost equivalent to that of coal,” Nanda says. But make no mistake, biochar has no relation to coal, which is a versatile but far dirtier material. Biochar’s myriad uses include an additive to improve soil fertility, a filter for drinking water and perhaps most importantly, a clean biofuel. “The Intergovernmental Panel on Climate Change is now recognizing biochar as a carbon-negative material,” Nanda says. “Biochar holds a lot of promises for the future.”

Putting Policies in the Hot Seat

All the technology in the world won’t help us address our solid waste problem until we have the infrastructure, policies and regulations in place to sustainably implement them, however. In developing countries, which struggle disproportionately with effective waste management, the solutions depend on context.

“If you don’t have land available you might think about different solutions, if you don’t have money you might think about different solutions,” Kaza says. “It really depends on the local context, what the capacity is, what resources are available. The technical issues are one small piece of it, [but] even if you have infrastructure in place you need to have the policies in place.”

Waste management also intersects with other issues in these countries, such as labor rights. Dangerous labor is often performed at dumps by informal workers known as waste pickers. These workers often have few legal protections, but their rights and well-being can be incorporated into larger waste management policy solutions. “There are some places where … a group of informal workers may be given the whole collection contract,” Kaza says. “It really depends.”

Solid waste management is a global issue, intersecting with other challenges such as climate change, environmental health, environmental justice and civil rights. Promising new technologies may soon help us recover more clean energy from our waste, but we can’t ignore the systems that generate such massive amounts of waste in the first place.

The Pictures That Saved Yellowstone