Could Humans Grow Food During a Nuclear Winter?

Researchers identify agriculture that could survive a sun-blocking catastrophe. 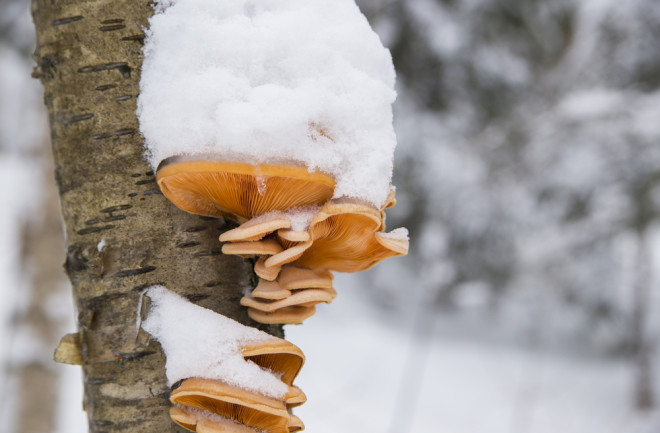 Since the Cold War, American and Russian leaders have been wary of a nuclear war. Even a limited nuclear exchange between nations would cause catastrophic destruction for the environment and society.

But what are the likely effects on global food production during a nuclear winter? Two researchers at Penn State University recently found that small segments of humanity might survive a nuclear apocalypse, in part thanks to some wild, edible plants and insects in tropical places.

The 2021 study by Daniel Winstead, a research technologist, and Michael Jacobson, a professor of forestry resources, is part of a larger Penn State research project on emergency food resilience. Published in early February in Ambio, the journal of the Royal Swedish Academy of Sciences, the study became more relevant as Russia invaded Ukraine and renewed fears of nuclear conflict.

“I had absolutely no idea that this would be at all relevant to any sort of [current] scenario,” says Winstead, the lead author. “It was certainly very strange timing.”

Of the sun-blocking catastrophes, including volcanic eruptions, meteor strikes or supernovas, the study notes that nuclear war is both the most probable and preventable.

A large-scale nuclear exchange of about 4,400 weapons between Russia and the United States (who possess more than 90 percent of the world’s nuclear inventory) would send upwards of 165 million U.S. tons of soot into the upper atmosphere. That amount of soot is about 11 times the weight of the three Pyramids of Giza, the study notes for reference.

Such an exchange would reduce the levels of sunlight to less than 40 percent near the equator, and less than five percent near the poles, compared to normal says the study. Temperate regions worldwide would endure freezing temperatures and severe precipitation reductions. And conditions would likely take up to 15 years to fully recover.

Permafrost would cover the landscapes of most of North America, Europe and Asia. And in wet, tropical forests like the Congo or Amazon basins, precipitation might reduce by 90 percent for several years after.

The soot from a large-scale nuclear war would cause global crop failure for at least four to five years. But in the tropics closest to the equator, less extreme temperature changes might provide a chance at agricultural production to feed survivors, both immediately and in the years before the sun would shine again.

The study sought to determine where agriculture might be possible, and what plants might grow effectively after a nuclear war.

To do this, researchers determined population centers close to forested, tropical regions, and chose both tropical dry and wet forests. Next, they examined a list of 247 wild, edible plants (WEPs) and chose 33 that could hold farming or foraging potential in post-nuclear war conditions.

They separated the WEPs into seven categories: fruits, leafy vegetables, seeds and nuts, roots, spices, sweets and proteins. Their criteria included abundance and ease to process, density in energy, essential vitamins and minerals, non-perishable in long-term storage without refrigeration and availability for harvesting most of the year. They also chose the 33 based on their tolerances for shade, drought, and cooler temperatures, though there were few, the study notes.

Indigenous peoples knew many of the plants, Winstead says, and incorporated some into their everyday diets. Those that offered greatest potential for large-scale cultivation included palm weevils – fat-and-protein-rich grubs. You can roast and grind them into powder for use in breads and soups.

“The amount of calories in fat and protein that are condensed in those grubs are immense,” Winstead says. “You can feed someone’s entire caloric needs with 30 or 40 Tupperware containers of palm weevils, and all you have to do is just continually harvest them. And you can fit that in the corner of a room.”

Other promising WEPs included (a) the konjac, which is a starchy root vegetable that you can use as a famine food, (b) the cassava root, which has been called the world’s fifth-most important staple crop based on caloric consumption and yield, (c) the wild oyster mushroom, a good source of protein, minerals, vitamins and antioxidants, (d) the safou, an oily fruit also called the “African plum,” and (e) several kinds of wild spinach and vegetable amaranths. The latter is one of the most cooked greens in Africa and Asia, the study says.

A second category identified WEPs that we could gather immediately after a nuclear war, before cultivating other crops. These include palm and tamarind fruits, dilo and acacia seeds, mopane worms, baobab trees, yams, and enset – one of the world’s largest vegetables that’s also known as a “false banana.”

“[It’s] basically a banana tree that you eat the tree instead of the banana,” Winstead says, noting that the plant prevented starvation during Ethiopian famines.

Baobab trees are also immensely useful, he says. They can hold water that remains drinkable indefinitely, their fruits are nutritious and storable, and you can eat their leaves and roots.

And no, Winstead hasn’t eaten most of these WEPs himself. But he says he’d love to try them.

Overall, Winstead hopes to increase awareness of WEPs through this study, (besides representing how bad nuclear war is) so we can use them responsibly – both now and in a potential, catastrophic future.

“Biodiversity isn’t just pretty to look at,” Winstead says. “There are a lot of uses here, and there’s thousands and thousands of edible plants that people eat across the world. It’s just that much more important to protect those areas so we don’t lose that biodiversity.”

Despite these edible plants species, most humans feed off of just 12 crops, Winstead says. This “Westernization” of global diets, he suggests, may also result in the loss of traditional knowledge about wild plant foods. Knowledge that women, who traditionally held community roles as food gatherers and preparers, passed down generationally.

Another concern is conservation issues. Deforestation has endangered some wild spinaches, Winstead says, and several yam species are also at risk.

Helping food resiliency right now will best prepare us for when it's needed in the face of future disasters, he concludes. Whether it occurs before a mushroom cloud forms on the horizon, of course, is anyone’s guess.

“There’s so much opportunity for us to do the right thing,” he says. “There’s enough land to go around. If people really cooperated and didn’t hoard things for themselves, I think that there would be plenty. It’s going to have to take a lot of well-meaning people to make a difference.”