A new report shows that plant-based meats and similar mimics could be the most cost-effective approach to reducing greenhouse gas emissions. 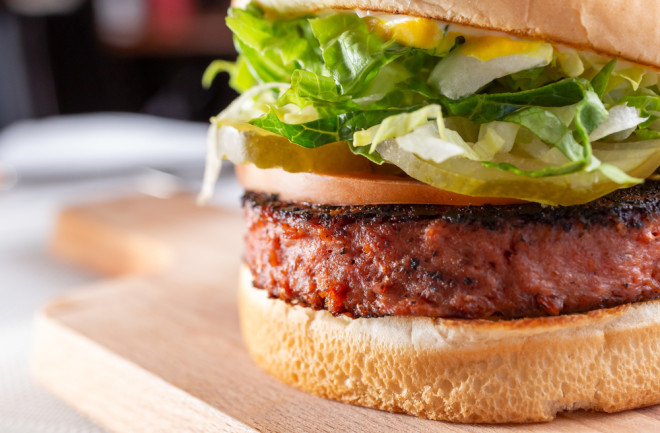 Clearly, plant-based meats are all the rage. And they might be the key to protecting our planet. In a new report, experts from Boston Consulting Group (BCG) and sustainability-focused investing group Blue Horizon show that the industry could be one of society’s best tools for reducing greenhouse gas emissions.

Across the industries they looked at — including sectors like shipping, building and aviation — alternative proteins reduced emissions the most per dollar spent. It wasn't a tight race, either. Plant-based proteins were three times more cost-effective than sustainable cement and nearly 15 times more efficient than green power. “We were kind of surprised ourselves by these numbers. We double and triple checked them,” says Friederike Grosse-Holz, director of Blue Horizon. “It really does seem like this is one of the low-hanging fruit in the fight against climate change.”

By 2035, alternative proteins could reach 22 percent of the global meat market. Even under conservative estimates, this could decrease annual CO2 production by 0.85 gigatons by 2030 — equivalent to decarbonizing 95 percent of the aviation industry.

According to the new report, 30 percent of consumers say that reducing climate emissions would be a primary reason to eat more meat mimics. Meanwhile, 76 percent are already familiar with the products, and many increased their alternative meat consumption during the COVID-19 pandemic.

While the future of alternative meats certainly seems bright, there are still hurdles. For one, consumers want cheaper and healthier products that taste and feel like the real thing. That's why a greener future requires technology to improve these products, along with the infrastructure to scale up the businesses that make them.

How To Make Fake Meat

Plant-based meats, like Beyond Burgers and Impossible Burgers, modify crops like peas and soy into fibrous proteins. Impossible Foods even embeds myoglobin-like molecules into their goods to create a meaty iron taste and a bloody appearance. Quorn, on the other hand, ferments fungi to produce muscle-like proteins which they weave into faux burgers and chicken strips. Alternative meats aren’t always vegetarian, either. Cell-based products, for example, borrow techniques from medical research to grow meat from animal stem cells.

Across the board, these culinary copycats address some of the issues with animal agriculture, like wasteful water use, land use, human health, animal welfare and antibiotic resistant superbugs. And perhaps most critically, they have untapped potential to help reduce emissions in the fight against climate change. “15 percent of global emissions are related to animal agriculture, so there’s a large opportunity here,” says Malte Clausen, a partner at BCG focused on climate sustainability.

The “Untapped Potential” of Alternative Meats

The team at BCG and Blue Horizon wanted to put a number to alternative meat’s greenhouse gas savings. “If we're going to talk about impact, then let's apply our intelligence and our tools to this, like we apply them to financial returns,” says Grosse-Holz.

Using existing data at the companies, they calculated how many gigatons of carbon the industry saved per dollar spent. Alternative meats blew the other industries — including aviation, cement and power — out of the water.

The team also surveyed 3,700 people from seven countries and found that they often decide to eat alternative meats to improve health. To reach the industry’s potential, they suggest, companies really need to pare down ingredients and clean up processing.  “Otherwise, it’s not going to make that next wave,” Grosse-Holz adds.

Investors like Blue Horizon, for example, are financing companies that make growth hormones to accelerate cell-based meat growth, or those using synthetic biology to make tastier, healthier and more realistic imitations. Even major meat companies like Tyson and Cargill are getting in on the game.

Governments can design trustworthy regulatory processes to make sure products are safe and healthy, the team says, as well as helping facilitate innovation. Governmental influence doesn’t end at regulation, either. Institutions can even help farmers transition to the new food scene by subsidizing the crops, equipment and know-how that alternative meats demand. Additionally, government buildings like schools and shelters buy truckloads of food, and could serve alternative meats to generate a stable demand and help normalize the products.

Companies can boost public perception, too. For example, many stores silo the products into their own plant-based sections, but Clausen says they should place them near other, more-conventional options if they want to reach the broadest audience. “Many companies would be wise to put more thought into marketing,” he says.

Still, at the end of the day, regular folks might wield the most power in choosing to buy meat mimics in the first place. By buying alternative meats and talking to each other about them, we can build a society where they’re more normalized and accepted.  “You don’t need to see yourself as someone who’s extraordinarily environmentally conscious to pursue these products,” Clausen says. “It’s something you select because it tastes great and has the right price.”

Dietary changes aren’t straightforward because food isn’t just sustenance; it also reflects our nationality, our family and our culture. It’s natural to feel hesitant about changing traditional recipes — as the late chef Anthony Bourdain put it, “food is everything we are.”

But as plant-based meats become tastier, cheaper and more akin to the real thing, sustainable choices don’t need to totally upend our lifestyles: Think of how similar a chicken nugget is to a vegan one. As the industry grows, we may be able to make sustainable choices without pruning the sociocultural roots of our cuisine.

“You have three opportunities each day” to choose sustainable options, Grosse-Holz says. Clausen says those decisions extend far beyond your plate, branching outwards into our conversations with others: “What goes out of your mouth is more important than what comes in.”

That's because the sustainable food transformation requires societal change. That starts with personal decisions. We’re nodes in the social web, and our choices, although they seem small, can ripple out to push the movement forward. So go try a plant-based patty. Post it on your Instagram. You can help drive the change we need.