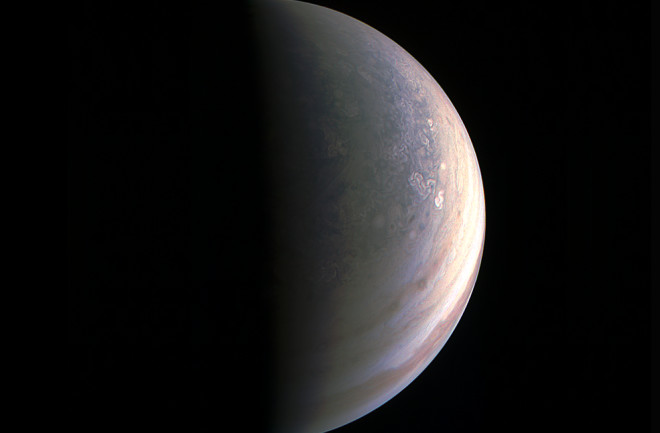 Juno captured this shot of Jupiter's north pole about two hours before closest approach on Aug. 27. (Credit: NASA/JPL-Caltech/SwRI/MSSS) Even from afar, we always knew Jupiter was a bit of an oddball, and upon closer examination we were correct. On Aug. 27, NASA's Juno spacecraft, with all its instruments blazing, swooped within 2,500 miles of the Jovian surface and beamed back the first-ever images of its north pole. It was the first of 36 planned flybys planned for the mission, so there's plenty more where this came from. Still, even from the first 6-megabyte download, Jupiter's revealing why it's unlike any other planet in our solar system. Jupiter is easily recognized by its giant, red, stormy spot, and its distinct latitudinal bands. But at its north pole, things are different. The clouds are pale blue in color, and those signature bands or zone belts are nowhere to be found. Despite its cooler color, the north pole is still a stormy place, with high-altitude clouds that cast shadows on features below. And to the south, NASA captured infrared images of the southern pole, illuminating its aurora — another first-ever.

An infrared glimpse at Jupiter's south pole. (Credit: NASA/JPL-Caltech/SwRI/MSSS) “First glimpse of Jupiter’s north pole, and it looks like nothing we have seen or imagined before,” said Scott Bolton, principal investigator of Juno from the Southwest Research Institute in San Antonio in a press statement Friday. Jupiter’s north pole is a weird place. For a decade now, researchers have kept their instruments trained on a pulsating X-ray aurora constantly hovering over the pole. It seems grow brighter and dimmer every 45 minutes or so, and when its blasted with solar storms it grows larger — sometimes the size of Earth — and more intense. And apart from Jupiter's pale blue pole, Juno also tuned in to Jovian radio. The planet’s sporadic radio emissions were first noticed in 1955, when Bernard Burke and Kenneth Franklin picked up the signal from the Mills Cross radio telescope in Australia. Jupiter's radio emissions can actually be heard from Earth on frequencies ranging from about 10 to 25 Mhz — RadioJOVE can get you started with a listening kit. Juno's Radio/Plasma Wave Experiment recorded radio emissions from the planet's aurora, and we've never listened to the planet from this close of a vantage point. NASA scientists shifted the radio waves into audio frequencies, and produced a recording that will really help you grasp the vast, haunting emptiness of space.

Stay tuned folks, you're going see, and hear, much more from Juno in the coming months.