Your BS Detector for Warp Drives, Double Moons, and Other Implausible Claims 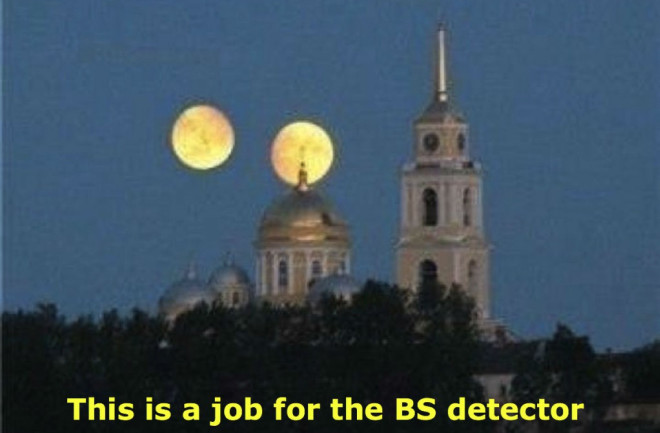 Will Mars really appear as large in the sky as the full moon? Your innate common sense is all you need to tell you this cannot possibly be true. (Credit: Unknown) Today is the day when, according to a widely circulated email/Facebook hoax, Mars will appear as large in the sky as the full moon. In reality, nothing short of the catastrophic disruption of the entire solar system could allow such a thing to happen (and if that were happening, you probably would have heard the news). Still, I have sympathy for those who were taken in by the hoax. We live in an age of amazing space imagery: snapshots of nitrogen glaciers on Pluto, a robot bouncing off a comet, ice moons hovering over the rings of Saturn. If you don't think too hard about it, one more wild view doesn't seem so implausible. The barrage of genuine scientific amazement surely also explains why so many people credulously accept other erroneous or at least misleading stories, such as the ongoing reports that NASA has validated an "impossible space drive"--or, in some variations, that NASA "accidentally created a warp drive." I'm sympathetic again. After all, NASA really did send an ion-powered spacecraft to the dwarf planet Ceres. That's pretty wild. Again, if you don't think too hard about it, why not accept another, even more staggering technological breakthrough? Some quick online research will usually separate the serious stuff from the hoaxes and the hype, but many people lack the time or even the inclination. What would be truly helpful is a set of basic reality-check tests that anyone can apply: an all-purpose science BS-detector kit that requires little more than getting past that first hurdle of thinking. I'm going to attempt to build one right here. I'd love to hear your ideas as well. Rule #1: Follow your intuition. I realize that this piece of advice actually, um, goes against intuition. After all, scientific findings often run contrary to our naive everyday ideas about how the world works--especially when you get to findings that take place entirely outside the realm of human experience. Still, people generally have a pretty good instinct for reading other humans, and science is ultimately a human endeavor. Does the claim sound too breathless, too credulous, too hyperbolic? Does it run strongly contrary to things you've heard before? If so, that certainly does not mean that it is wrong, but it means that you should activate your skepticism and press on further through the BS triage process before accepting it as right. Intuition is a very useful first filter. Rule #2: Recast the claim in familiar terms. This is a way to make your intuition work better by negating the power of jargon and by connecting things you know to things you don't know. "For one day Mars will appear as large as the moon." You've certainly never seen that before, and it's weird that it would happen for one day only. If someone emailed you a note claiming, "For one day, fireflies will appear as large as eagles in the sky," I'll bet you'd simply laugh and delete. "NASA created a space drive that could reach Mars in 10 weeks and uses no fuel." OK, if someone told you, "General Motors invented a car that goes 1,000 mph and uses no gasoline," your skepticism would be rightly activated. In each case, the style of the claim is the same. Yes, some genuine discoveries may fail the smell test here, too, but the point is to keep going through the finer gradations of BS detection. As you go deeper, the legitimate science will separate out. Rule #3: Look at the source of the story. We're getting to the more advanced levels of triage. There is an inevitable appeal to authority at these stages. Some publications and some web sites are more trustworthy than others; some links on Facebook have more established trust than others. Does the story track back to a journalistic source? If so, is that source an attention-seeking tabloid or an enthusiast site with a clear interest in hype? Stories with no links or quoted sources are automatically more suspect. That said, some seemingly reputable publications such as WiredUK or the Telegraph have published misleading or outright irresponsible articles about the alleged "NASA space drive." (See examples here and here.) Which brings us to... Rule #4: Consider the authority of the claim. Now we're at the more active-investigation type of BS detection. This requires some active investigation on the part of the reader--but honestly, not that much. Is the person making the claim someone who has plausible credentials? In the case of the Mars stories, you will never see a real astronomer cited in any of the emails--because no astronomer would endorse such nonsense. In the case of the space drive, the claims trace back to independent inventors and one small team of NASA-affiliated researchers. That one is tougher to parse, but when the stories declare that a lone inventor stands against the whole of mainstream science, your BS needle should swing instantly into the red zone. Just for the record: Galileo was not the only one looking through a telescope in the 17th century. The Wright Brothers were not the only ones attempting heavier than air flight. Einstein was building on existing physics ideas, and he was sharing and publishing his insights openly. Anyone who cites these examples as proof that one person might be right while the whole rest of the world is wrong is being neither honest nor historically accurate.

When the claim and the evidence are wildly out of balance, set your skepticism to "full." One prominent news organization juxtaposed an unproven test model of the "space drive" (left) with the famous but entirely imaginary impulse engines of the Starship Enterprise. (Credit: Roger Shawyer, Paramount) Rule #5: Ask, has it been demonstrated? As astrophysicist Katie Mack noted on Twitter, it's deceptive to claim that a space drive "works" (as many news stories did) unless it actually works as a space drive--that is, unless it actually propels a payload in the manner claimed. The Wright Brothers didn't need to put their airplane through peer review because they flew it in front of a live audience. If someone tells you that Mars will look giant today even though that has never happened before, you should immediately ask--why not? And if a writer claims a space drive (or any novel device) has been demonstrated, you should ask--demonstrated how, by whom, and to whom? Rule #6: Ask, has it been reviewed and published? There is a reason the peer-review system has proven so successful, despite all its flaws. Even well-meaning researchers can easily fool themselves if they get an interesting-looking error--especially if they have an emotional or financial attachment to a specific result. Peer review helps week out both deliberate and inadvertent errors, along with bad methodology and premature claims. People who spend a lifetime studying a topic tend to know more about it than those who do not! You wouldn't hire a plumber who had no formally acknowledged training at fixing pipes. Likewise, you shouldn't trust a self-proclaimed authority who has not been able to get his or her work past peer review. Common sense remains valuable even at this stage. Rule #7: Check out what the skeptics say. Getting to this level requires some research, more than most casual readers will do. But in the Age of Google, a meaningful investigation of this kind need not take more than a few minutes. Just type in the basic claim along with the potent keywords: "hoax," "skeptics," "debunked." These days there are self-styled skeptics ready to rebut just about everything, of course, from climate change to the Apollo program. Still, this is a powerful reality check. If the most intense skeptics are those who have spent the most time and energy studying something (see above), then the claim deserves your highest level of skepticism. This is not to say that experts cannot be wrong, or that new ideas cannot be right. But someone who does not know a field well is more likely to make an error or an unfounded assertion, and someone who does know a field is more likely to catch it. In the case of Mars, a web search would tell you that the "as large as the moon" story has exactly zero credibility. In the more complicated case of the space drive, you would quickly find that there are fewer than 10 people in the world claiming that the drive works, while the entire rest of the physics community considers the concept dubious until proven otherwise. That last point is important. In science, many strange-sounding ideas ultimately turn out to be supported by the evidence. General relativity and quantum mechanics come immediately to mind. Ultimately, the BS detector, like science itself, is about demanding credible, repeatable evidence. It is about applying the standard articulated by Pierre-Simon Laplace two centuries ago: "The weight of evidence for an extraordinary claim must be proportioned to its strangeness." Or as it is often expressed in modern terms: Extraordinary claims require extraordinary evidence.