You can't resolve away climate change 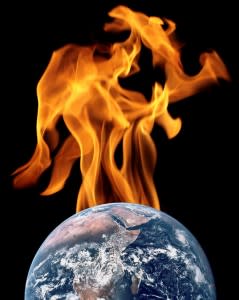 My stance on climate change is clear: the scientific evidence that we're getting warmer is overwhelming, and the most likely cause is that it's human-produced. The first is fact, the second is a conclusion based on a lot of evidence. Climategate showed us that the noise machine is in full swing; nothing in those emails takes away from the fact that there are multiple and independent lines of evidence that we're warming up. And the talking heads on Fox and other right-wing media saying that the harsh winter is evidence against global warming shows how dumb of an argument they're willing to make. But it's not just the stuffed shirts in the media making their own reality as they go along; some people in the government are trying to legislate it. Climate change deniers in both Utah and South Dakota have passed resolutions essentially condemning the science and reality of climate change. In Utah it was just a broadside at the science; in South Dakota it's aimed at a "balanced teaching of global warming in the public schools." Yeah, sounds familiar, doesn't it? Besides the creationist analogies, the South Dakota resolution sounds like something out of 1984:

WHEREAS, the earth has been cooling for the last eight years despite small increases in anthropogenic carbon dioxide;

Wrong! The Earth has been warming overall, and the last decade was the warmest on record, with records going back to 1880.

WHEREAS, there is no evidence of atmospheric warming in the troposphere where the majority of warming would be taking place;

Wrong! The troposphere is warming.

WHEREAS, historical climatological data shows without question the earth has gone through trends where the climate was much warmer than in our present age.

Yes, and the Earth went through a period of heavy bombardment from asteroids and comets a few hundred million years after it formed. Just because something happened once doesn't make it safe.

WHEREAS, carbon dioxide is not a pollutant but rather a highly beneficial ingredient for all plant life on earth. Many scientists refer to carbon dioxide as "the gas of life";

Wow. I mean, wow. Let's lock these guys in a room filled with CO2 for an hour or two and see how much life is left in them. And I love the "many scientists" line. You know what? A whole lot more scientists call it a greenhouse gas. Wow.

WHEREAS, more than 31,000 American scientists collectively signed a petition to President Obama stating: "There is no convincing scientific evidence that human release of carbon dioxide, or methane, or other greenhouse gasses is causing or will, in the foreseeable future, cause catastrophic heating of the earth's atmosphere and disruption of the earth's climate..."

This petition has been thoroughly debunked before; it's nothing more than an attempt to muddy the waters by deniers. However, my absolute favorite part of the South Dakota resolution is this next bit. Are you sitting down? Good:

NOW, THEREFORE, BE IT RESOLVED [...] (2) That there are a variety of climatological, meteorological, astrological, thermological, cosmological, and ecological dynamics that can affect world weather phenomena and that the significance and interrelativity of these factors is largely speculative; and

Wait, what? Did those guys in the South Dakota legislature actually say astrological? Geez, no wonder they can't figure out that global warming is real. They think they're reading their horoscopes! It makes me wonder if they just want the planet to warm up so that their state has milder winters. 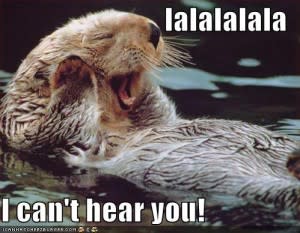 It angers me that the science of so many topics has been warped and mutilated by people with a political agenda. I have no such agenda, except to speak the truth as I see it. I make no money if global change is real, I get no power, no thrill. In fact, the idea of a substantially warmer planet scares me, if not for myself, then for my daughter and everyone destined to live in that environment. The politicians who would vote yes on these resolutions are doing so out of a near-religious belief that global warming is not real -- they're the otter in that picture. Contacting them probably won't help; I suspect that if every last constituent they had contacted them, they would still cleave to their beliefs. But I urge people to write their congressional representatives anyway. And spread the word; if these two states deny reality this blatantly, then others will follow. Bet on it. So: 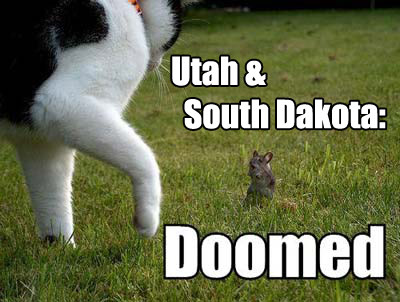 And if other states follow suit, they may doom all of us.