YOU can find extrasolar planets

Ever dreamed of making an astronomical discovery, of finding a new planet orbiting some distant sun trillions of kilometers away? 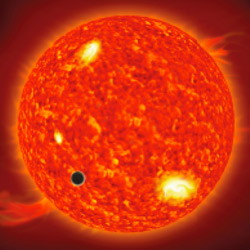 Well, now's your chance. The good folks at Zooniverse have started a new project where citizen scientists can actually look for extrasolar worlds: Planet Hunters. The idea is pretty cool: they have data from NASA's orbiting Kepler Observatory, a telescope that is staring at one part of the sky and observing a hundred thousand stars all day and night. If a planet orbits a star -- and its orbit lines up just right -- the planet will pass directly in front of the star, blocking its light for a few hours. That dip in light can be detected, revealing the presence of the planet! With Planet Hunters, you're presented with the data, and you look for those dips. Astronomers have programmed computers to look too, but the Zooniverse people think that humans can do better. It's not a bad assumption; it's the devil's own work teaching a computer to sift through this kind of data. And there are lots and lots of people out there who can do this... and I'm guessing more than a few BABloggees are in that set. They have information on the science behind all this, and simple instructions to get you started. I played with it a bit and it's not too hard. And it's not at all difficult for me to think that somewhere in all that data are planets waiting to be discovered, planets the computers will miss, but that can be detected by the 1500 grams of pink computer behind your eyes.