With ALMA, Astronomers Find A Bounty of Organic Molecules Near a Young Star 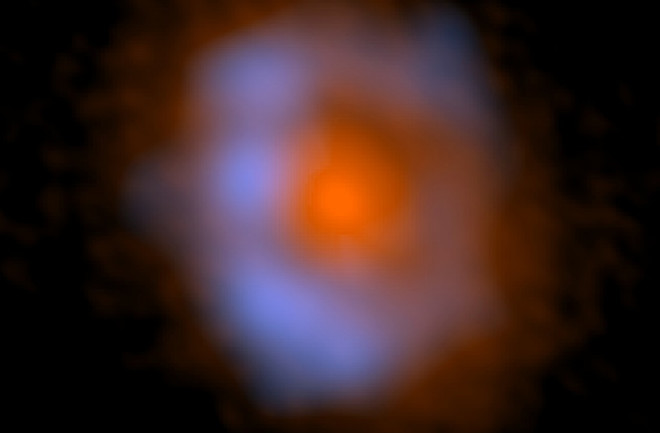 ALMA imaged V883 Ori's dust in orange, with the organic molecule methanol in blue. (Credit: ALMA, ESO/NAOJ/NRAO, Lee et al.) One of the fundamental questions in looking for life in the universe is figuring out where the materials necessary for making life are likely to exist. These complex organic molecules are, somewhat surprisingly, found all over: in giant dust clouds in space, and on lonely comets in our own solar system. The question for astronomers is figuring out how they make their way onto planets like Earth. Astronomers looking to learn about the solar system's early history often turn to comets, as they formed very early in our history and haven't changed much since. Alternatively, they can look to other star systems and the gaseous disks around young stars that are still in the process of forming planets. Astronomers using the ALMA radio telescope have done just that to a young star called V883 Ori 1,300 light years away and found complex organic molecules swirling around it.

ALMA’s ability to see such dusty systems at high resolution has made this method much more feasible in recent years. The problem is that in the outer region of the disk, most of the organic materials are locked up in ice, and invisible to ALMA’s radio vision. Close to the star, heat sublimates the materials into gas form. The line between these two regions is usually called the snow line. But anything inside the snow line is usually too close to the star for ALMA to see clearly. Young stars shroud the centers of their systems in cocoons of dust thicker than the rest of the disk, so that even ALMA cannot see through. V883 Ori is a young star that is currently sucking in new material, causing it to flare hotter than normal. This widens the region of the disk that it can heat, moving the snow line out beyond the cloud of choking dust to where ALMA can resolve an image. The no-longer frozen molecules allow astronomers to make a map of the organic compounds in its disk. What they found was a ring of material roughly twice as far from the star as Neptune orbits our sun. Closer, the dust is still too thick to see, while farther out, the organics remain ensconced in ice. We can't run back the clock on our own solar system to see its past. And while we've sent missions to comets — Rosetta being the most recent — it's tough to get the full picture of how the organic molecules present from even very early in our history affected the solar system. These peeks at other young systems may be the best way astronomers have to learn about our own history, and how life might have arisen on our planet. The materials found around V883 Ori include methanol and acetone, and this discovery marks the first time acetone has been definitively observed in a young system such as this. Jeong-Eun Lee, from Kyung Hee University in Korea, led the research team, which published its findings in Nature Astronomy on February 4.