With a Sandbox and a Rover Replica, Working to Free the Stuck Mars Rover 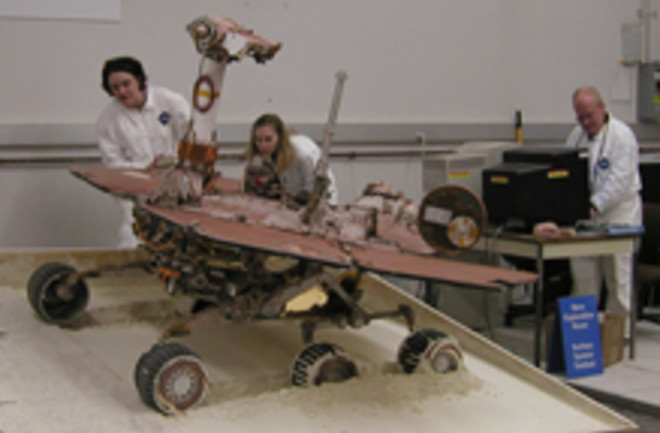 How do you extract a vehicle from a sand trap when the operation has to happen remotely from a distance of 174 million miles? That's the question that NASA scientists are attempting to answer at the Jet Propulsion Laboratory in California, where engineers are working on a plan for how to get the Mars rover Spirit moving again. The rover has been stuck, up to its hubcaps in sand, since April 23rd when it drove backwards into an area now called "Troy." To test strategies for how to get the rover unstuck, scientists built a sandbox that resembles that patch of Martian terrain, and then drove a rover replica into it. Spirit project manager John Callas explains that the scientists carefully mixed sand, pottery clay, and a light material called diatomaceous earth to imitate the dirt on Mars.

While the ingredients do not match the Martian soil's chemistry, the mixture has a similar strength. "It is representative of the trouble Spirit is in … in very, very fluffy soil with very little load bearing strength," Dr Callas said. "It's like talcum powder, but not as fine grained. It clings to the wheels and they lose traction." Adding to their problems, the rover is tilted on a 12-degree slope [The Age].

If the researchers come up with a set of commands that successfully extricates the Earth-bound rover from its sandbox, the orders will be sent to Spirit on Mars. The first possible technique, which engineers will try with the replica this week,

is to ask the rover to simply drive forward. Because it has a gimpy right front wheel, Spirit has been driving backward in recent years, dragging the wheel along. Commanding the rover forward would amount to backing out of the fluffy sand patch onto surer ground nearby. "We think terrain we can drive on is just a few feet away," Callas said [Los Angeles Times].

Spirit's drivers stopped trying to maneuver the real rover on May 6 for fear of making the situation worse, but that doesn't mean it has been dormant since then. Since its wheels dug deeply into the dirt, Spirit has turned its attention to the layers of soil revealed below, and has analyzed the minerals contained therein. Even

if the worst happens and Spirit is entombed where it sits, that won't be the end of its mission, Callas said. Instead of a rover, it would become a stationary lander of the sort NASA has sent to Mars repeatedly over the years. It could still do science from its new, permanent home [Los Angeles Times].

Rover fans can follow the progress of the engineers seeking to liberate Spirit from its sand trap at a new Web site devoted to the cause: Free Spirit. Related Content: 80beats: Will This Mars Rover Ever Rove Again? Spirit Gets Stuck in the Sand 80beats: Mars Rover Spirit Shows Signs of Age, Including Senior Moments 80beats: Mars Rover’s Temporary “Amnesia” and Paralysis Puzzle NASA 80beats: The Little Rovers That Could Mark Their Fifth Anniversary on Mars Image: NASA/JPL-Caltech