The Wide-field Infrared Satellite Explorer has detected its first near-Earth asteroid! Named 2010 AB78, it was discovered in mid-January by the orbiting observatory. Here's an image of the rock: 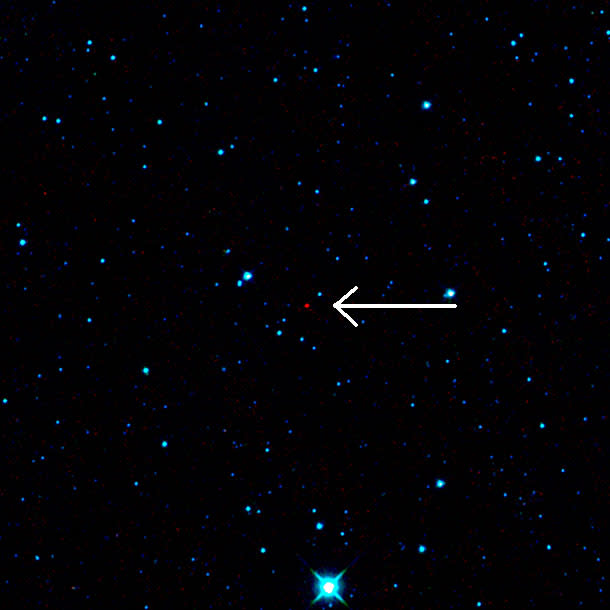 AB78 is about a kilometer (0.6 miles) or so across, making it one of the bigger asteroids that can buzz the Earth. The orbital information on it isn't perfect yet, but we already know its orbit doesn't actually cross the Earth's so it can't hit us. At closest approach it's still many million of kilometers away from us, and poses no threat. However, I'll be honest and say this discovery is mildly alarming (stressing the word mildly). One of the missions of WISE is to find such asteroids; some rocks are dark and therefore hard to detect using telescopes which search in visible light. However, AB78 is warm, so it glows in the infrared, making it an easy target for WISE. That's why searching for such asteroids is one of WISE's main goals. The thing is, statistically speaking we should already know of almost all the kilometer-sized rocks that are in near-Earth orbits; given the rates and methods of finding them, our catalog should be about 90% complete. Finding an asteroid this size that eluded detection up until now is somewhat unsettling. How many more have we missed? Let me be clear: this could be a statistical fluke; even if we know of 90% of all the NEAs out there, 10% still lurk out in the black. It could simply be that this first one found by WISE is somewhat on the hefty side, and the next 20 will be far smaller. Remember too, this one is bright in the IR (in the above picture, red is actually at a wavelength of 12 microns, 15 times longer what the human eye can see) and so it was easy to spot. Smaller ones are fainter, so they may not be as obvious and will take longer to detect. Also, AB78 is on a weird orbit, tipped substantially (about 33°) to the plane of the solar system, again making it more difficult to spot. And in a way, this is good news! The more we know about these things, the better. AB78 may be a fluke, or there may be more rocks this size out there hiding, but either way I want as much info as we can get. Just knowing how many asteroids of a given size orbit the Sun and get near the Earth is an important piece of data, so that we can apply some statistics to them and try to figure out, on average, how often we get hit. That's one of the things WISE will do over its 10-month-long mission, so in a year or so we'll be in a better position to understand these orbiting worldlets. Emily Lakdawalla at The Planetary Society has more info as well. Image credit: NASA/JPL-Caltech/UCLA