Why We Explore: A Comet Tale Told in Four Pictures

There are many ways to explain the reasons for space exploration: the technological spin-offs, the science-education value, the commercial potential of space, the pragmatic lessons back home in everything from space-weather forecasting to mineral exploration. I've seen plenty of evidence that all these things are true, yet they dance around the most essential and least tangible motivation. We explore because it is what living things do. Movement and the acquisition of knowledge are integral to the definition of life. When we explore, we feel more alive. I certainly feel it. When I see the images from afar and begin to understand alien worlds, a spark stirs inside me. One of the greatest sparks I have felt recently comes from the European Space Agency's Rosetta spacecraft, now executing a complex orbit around a comet called 67P/Churyumov–Gerasimenko. (The name is such a mouthful that scientists often call it Churry, C-G, or just 67P). This is the first time in history a spacecraft has orbited a comet. What we are seeing there is already spectacular, and is getting steadily more so as Rosetta edges closer to the comet and gets steadily sharper views. Then in November a small lander named Philae will touch down on the comet, analyze its composition, and take pictures from the surface. But I'm getting ahead of myself. There is no need to anticipate the future. The thrill is happening right now, as documented in these four extraordinary images. For more imagery, follow me on Twitter: @coreyspowellFar versus near. On the left is a brand-new image of Comet C-G seen from the Very Large Telescope in Chile, one of the greatest telescopes in the world--but it is stuck here on the ground. On the right, a view from Rosetta: a craggy landscape of dust-covered ice and frozen gases. The surface gravity is less than 1/100,000th that of Earth, so a single bound would take you over the horizon and beyond. (Credit: C. Snodgrass/ESO/ESA/Rosetta)

Here come the cold jets. We know that comets create spectacular tails of dust and gas. When you see a comet, you are basically watching the history of the solar system running in reverse. Some 4.6 billion years ago, as the planets were born, dust and ice came together to make the comet; now it is all unraveling. In this image you can see the process as it happens. Un-history in the making. (Credit: ESA/Rosetta/Emily Lakdawalla) 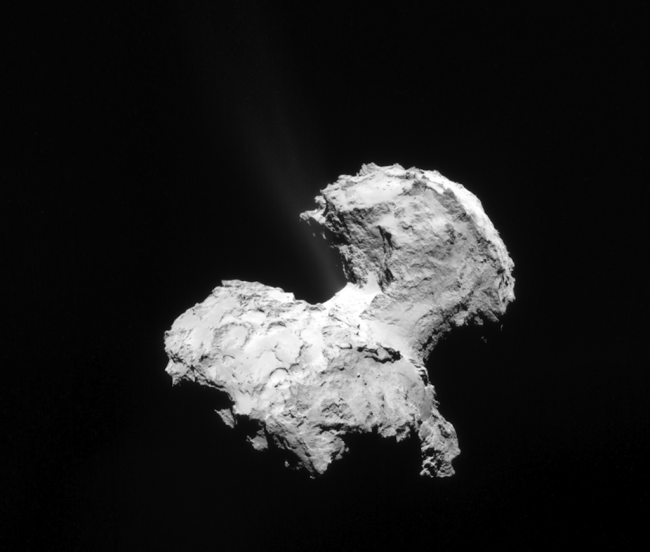 Ten worlds in two miles. Although Comet C-G is tiny (2.2 x 2.5 miles, or roughly the size of lower Manhattan), it is incredibly diverse. This preliminary geology map--maybe it is a cometology map?--shows at least 10 distinctly different formations. The diversity shows how incredibly complex things were in the early solar system. Even the smallest objects were the product of many encounters and separate mixtures. (Credit: ESA/Rosetta/MPS) 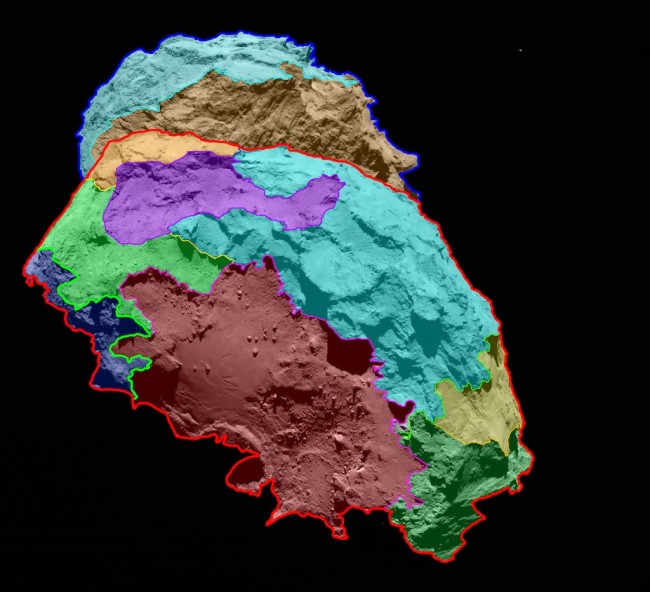 That's not a moon--that's a crescent comet. You know the term "selfie" has gone mainstream when it's used by scientists at the European Space Agency. But unlike most selfies, this one is about perspective, not narcissism. A camera aboard the Philae lander, which is still strapped to Rosetta, took this image looking out across the spacecraft, seeing the comet in the background. Comet C-G's double-lobed shape makes for two crescents, like two moons strapped together. It is a view never before available to human eyes. Now it is ours forever. (Credit: ESA/Rosetta/Philae/CIVA) 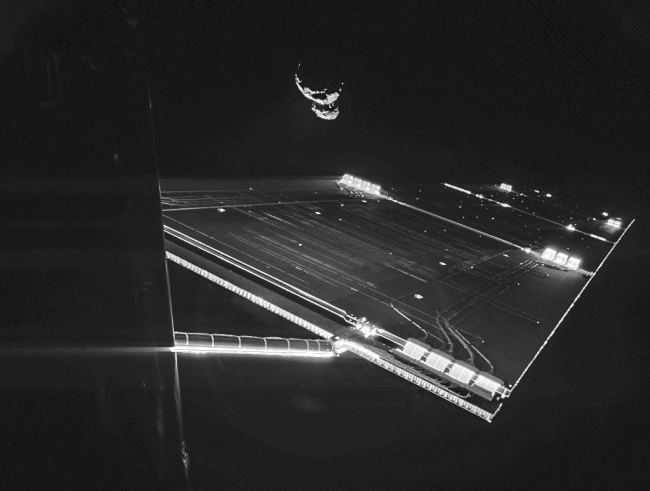