Why The Joker’s Magic Trick Wasn’t So Serious

It’s not exactly a magic trick when everyone knows how it’s done, but we were still amazed by the viciousness of the Joker’s—even if it wasn’t as deadly as it looked.

The second time we meet The Joker in The Dark Knight, he shows us a magic trick that everyone knows how to do, but no one would ever find a volunteer for. Stabbing a pencil into a desk, The Joker thrusts a henchman’s head into it eraser-first. The pencil disappears somewhere inside his head. Ta-da.

The scene is a cinematic description of the deadly humor of The Joker—and an example of character acting by the late Health Ledger that I have yet to see topped—and the immediacy of the violence likely shocked audiences into thinking that the unfortunate henchman met his end by Number 2. There is no trick; the pencil would have made it into the goon’s brain. But the brain is far more resilient than you may suspect. If treated promptly and properly, The Joker’s “magic trick” wouldn’t be so serious.

Part of the “magic” is that once the pencil disappears we only have an idea of where it went. Any anatomist would know. The path of the pencil begins with the eye. The human skull has two recesses—orbits—that hold the eyes. At the back of these orbits, there are holes for the eyes to connect to the brain. The eyes might be the windows to the soul, but the superior orbital fissure is the window to the brain (highlighted in white here).

An object entering the orbit where your eye sits has two options: it either breaks through the back of the orbit or follows the path of least resistance. If the object enters with enough force—like a bullet—it can exit the back of the orbit, as the bone there is relatively thin. If the force is lower however, the path of least resistance is directed by bony brain anatomy. A small diameter object like a pencil would enter the orbit, pass through the superior orbital fissure, follow grooves in the sinuses, and enter the brain underneath the frontal lobes, near (or in) the cerebellum and close to the brain stem.

It’s not a magic trick because doctors know exactly where the pencil goes, even if audiences don’t. In cases described in the medical literature, unlucky people have fallen face-first on the chopsticks they were using to eat with, and the resulting CT scan shows just what would happen to The Joker’s victim. In this CT scan, we see the path of least resistance leads all the way to the back of the brain.

Even in cases like this however, the outcome is far less serious than The Joker led us to believe.

Why It’s Not So Serious

Aside from outright assault like The Joker’s, many of the cases describing how a projectile enters the eye and subsequently the brain involve mental illness. Patients with illnesses such as depression, paranoid schizophrenia, and bipolar disorder have attempted suicide by basically performing the morbid trick on themselves. In one case it was a pencil. In another it was a toothbrush. In the CT scan reproduced below, it was an arm off a pair of eyeglasses. 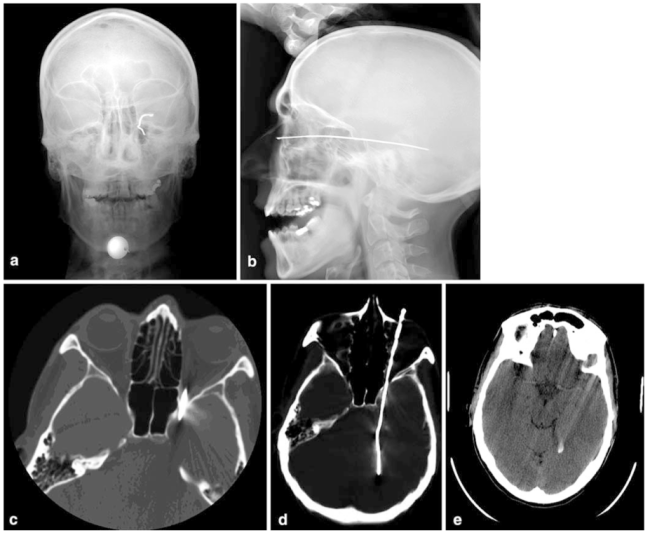 These cases are always serious—an orbitocranial injury always is—but rarely so serious that the patient dies instantly. In fact, if treated quickly, partial to full recovery describes the majority of these cases. The patient who had the arm of the glasses enter his brain was released from the hospital after three days with no complications and intact vision. It is when such injuries are not treated that there is a real danger. One patient who attempted suicide with a ballpoint pen died after four days due to the undiagnosed trauma; the pen was only discovered at the autopsy. And if the trauma is bad enough, as in the case of a 13-year old boy who had an orbit penetrated by a metal bar which herniated his brain stem, treatment can only go so far.

Fatalities do happen in cases of penetrating eye injury, but many properly treated cases have decent prognoses. The brain is much more adaptable than we give it credit for. It can be seriously injured and then rebuild, rewire, and restart. Patients have survived injuries almost precisely mimicking The Joker’s magic trick with everything from pieces of wood to chopsticks to pencils and pens. Recall Phineas Gage, the unfortunate ironworker who had his entire skull and brain run through with what was effectively a metal rocket and survived. Having an object inserted into the brain—even when it is a bullet—isn’t always a death sentence.

The ill-fated henchman who unknowingly volunteered for the clown’s disturbing magic trick would probably have survived. He might have lost consciousness initially and eventually some of his vision, but he would likely make at least a partial recovery. All joking aside, if the mob has a good doctor, the henchman would live to terrorize Gotham another day.