The telescope, once complete, will be made of hundreds of spherical detectors suspended at the bottom of the sea. 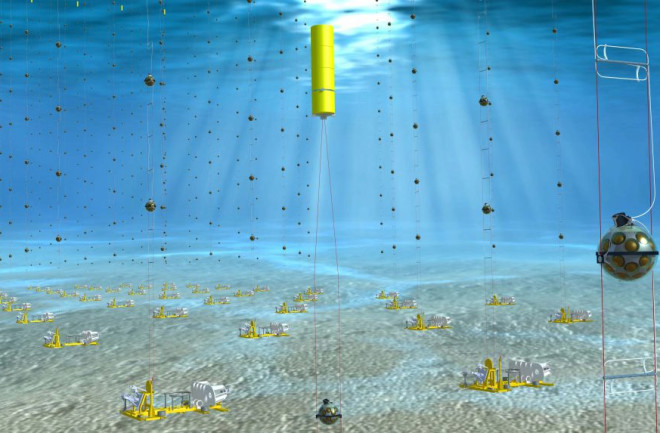 Deep under the Mediterranean Sea, hundreds of watchful eyes hang suspended on cables, waiting for a rare and valuable flash. Their quarry are ghostly neutrino particles, capable of tunneling through light-years of space and a planet’s worth of rock without ever coming into contact with matter.

But, here, under the ocean, they just might hit a detector from the Cubic Kilometre Neutrino Telescope, or KM3NeT. While the international collaboration is still in the early stages of construction, it hopes to soon begin tracking some of the most elusive particles in the universe.

Neutrinos are nearly massless particles produced in the sun and in energetic events like supernovas, colliding stars, and gamma-ray bursts. Because the particles barely interact with the rest of the universe, they are notoriously difficult to study, though trillions pass through your body every second.

Researchers have tended to bury neutrino detectors in vats of supercooled liquids or miles underground, hoping that neutrinos will be the only particles that make it through.

This time, researchers are hiding the detectors at the bottom of the sea, on the other side of the planet from the skies they hope to study, to block everything but neutrinos from hitting their detectors.

Most neutrino detectors look for the rare flashes of energy the particles give off when they collide with the nuclei of atoms. But because these interactions don’t happen very often, neutrino detectors have to cover a lot of ground – quite literally. KM3Net, as its name implies, will one day occupy a cubic kilometer of seawater – about 400,000 Olympic swimming pools worth.

Neutrino detectors also have to be protected from the onslaught of regular radiation, which would otherwise drown out the fainter gleam of neutrino interactions. So researchers build them deep underground, in abandoned mines or underneath Antarctic ice sheets.

Now, they are trying one at the bottom of the sea – and the other side of the world. “The underwater telescope is bombarded by millions of different particles but only neutrinos can pass through the Earth to reach the detector from below,” said Clancy James, a researcher at the Curtin Institute of Radio Astronomy in Australia, a KM3Net partner, in a statement. “So, unlike normal telescopes, it looks down through the Earth at the same sky viewed by upward-facing telescopes in Australia.”

Each telescope is actually made up of hundreds of spherical detectors a little bigger than a basketball. These are suspended on vertical lines, and each node is connected by cables that run along the sea floor. The first test components were installed in 2013, with another round of construction in 2015 and 2018. Scientists are currently testing a limited number of detectors, and they are still searching for funding to make the full array a reality.

Two telescopes comprise KM3Net. One is called ARCA, or Astroparticle Research with Cosmics in the Abyss, and it sits off the coast of Italy. It will study the higher-energy cosmic neutrinos produced by the universe’s most energetic events, like gamma-ray bursts, and provide scientists with a greater understanding of powerful astrophysical events. Its partner is ORCA, or Oscillation Research with Cosmics in the Abyss, located closer to France. This telescope will study the lower-energy particles produced by cosmic rays striking Earth’s atmosphere.

The detector spheres are each a little larger than a basketball. (Credit: KM3NeT)

So far, the telescope’s operations have been for testing purposes, proving that the setup is successful using only a few of the eventual hundreds of detectors. The team is in the process of adding more. The completion of the telescopes will mean that astronomers don’t have to get very, very lucky to spot a neutrino signal. Instead, the large array should open new windows into the hard-to-view world of barely-there particles.