One problem with astronomical observing is its two-dimensional nature. You can point a telescope at a star, a planet, or a galaxy, but they all look pretty much infinitely far away (if you're walking, that's pretty much a fact). So some new software called Whereis M13? looks pretty interesting. It's an interactive 3D galaxy atlas, and it gives lots of info and a graphical display of the location of a particular object in space. For example, here is the eponymous M13: 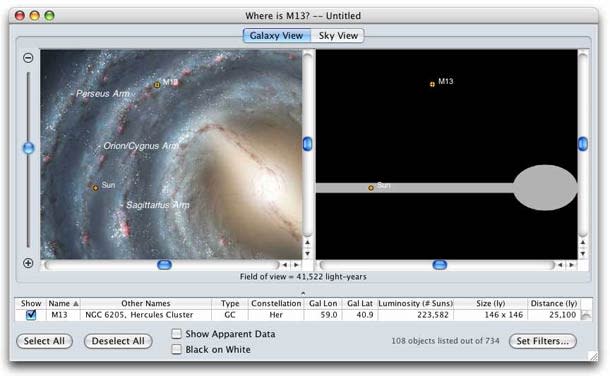 You can see it gives info in the window, as well as a view looking down at the galactic disk as well as along the plane of the galaxy, and you can see that M13, a globular cluster, is well above the galactic plane. It's a rather basic app at the moment, but it's a) free, and 2) promising. I think that with more features this could be a very cool and educational piece of software. Tip o' the redshift to BABloggee Keith Ebbecke.