Where Can I See Comet Pan-STARRS? 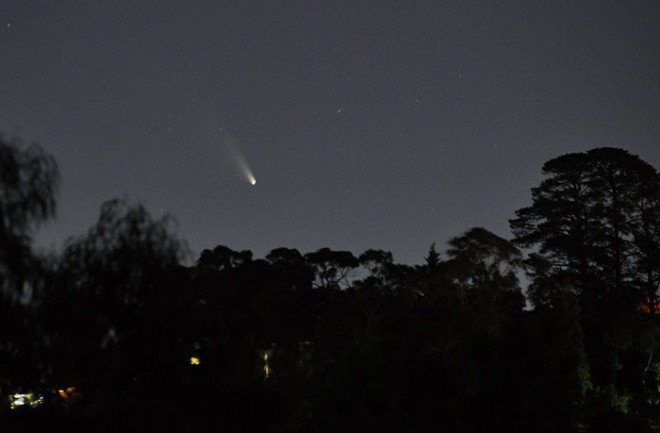 The first of this year’s cometary double features, Comet Pan-STARRS (C/2011 L4), is coming to a sky near you! Observers in the northern hemisphere should get their first glimpse of the comet tonight, visible with the naked eye. The comet will glow relatively brightly in the west over the next few days, then dim slowly in the weeks to come as it leaves the Sun farther behind.

This graphic shows the comet's expected positions in the sky throughout March. Image credit: NASA Even though southern viewers have watched it brighten throughout February, Pan-STARRS came closest to Earth a few days ago, and is only now presenting its best views to northern skywatchers. On March 9 and 10, Pan-STARRS will be at its brightest, because that’s when it’s closest to the sun. Visible to the naked eye (but looking even better through binoculars or a telescope) at a dark site, the comet will appear as a bright “smear” of light low in the west up to an hour after sunset. And next week’s crescent moon can help locate Pan-STARRS: On March 12, the comet will lie to the moon’s upper left, and on the next night it will be on the moon’s lower right. After two weeks, the comet will have faded enough to require optical instruments to see it. (For full details on the comet, including a sky map, gorgeous photos, and fast facts, check out Astronomy magazine's special report

.) Like most comets, Pan-STARRS is basically just a large, dusty iceball flying through space around the sun. Ideal conditions might let observers spot two different tails trailing away from the main circular glow (known as the head, or coma). One tail---made of ionized gas escaping the comet---will appear a faint blue, while the other---made of escaping dust---will appear white or pale yellow. Given this comet’s appearance and the events of the past few weeks, the casual observer might be forgiven for thinking the universe is out to get us. First, a just-detected asteroid nearly clipped our planet on the same day a meteor actually wreaked havoc on a Russian city. Then another rock buzzed by within the Moon’s orbit on Monday, and yet another asteroid

is due to pass nearby (about 2.5 times as far out as the Moon) on Saturday. And this is all just prelude for the headliner of the year’s two bright comets---when it appears in November and December skies, Comet ISON (C/2012 SI) might glow a thousand times brighter (or more!) than Pan-STARRS. The timing here is just coincidence, of course, and except for the meteor, none of these rocks presents any kind of threat.