When It Rains in the Atacama Desert, the Microbes There Die 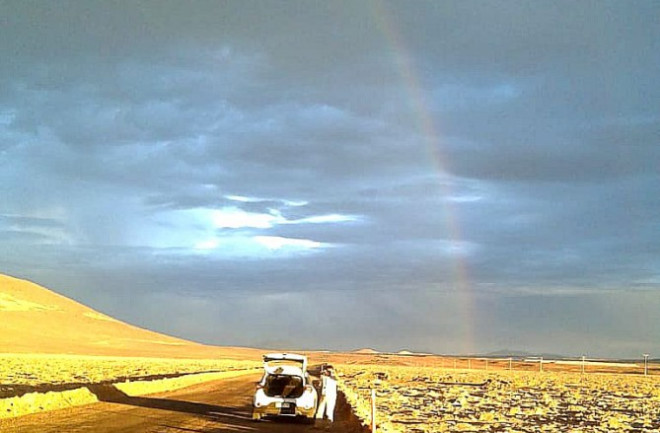 A very rare rainbow in the Atacama Desert in Chile. (Credit: Carlos González-Silva)

The rain fell in the Atacama Desert in Chile for the first time in hundreds of years, and it caused a mass extinction.

It might seem natural to think that such rains would be followed by blooming flowers and new life. But, an international team of planetary astrobiologists found, this precipitation killed most of the microbial life in the region.

“When the rains came to the Atacama, we were hoping for majestic blooms and deserts springing to life. Instead, we learned the contrary, as we found that rain in the hyper-arid core of the Atacama Desert caused a massive extinction of most of the indigenous microbial species there,” co-author Alberto Fairen, an astrobiologist, said in a statement.

Before the precipitation, which happened in 2015, in this arid, Mars-like desert, scientists estimate that there were up to 16 different species of microbes. But, after the rain, only two to four species remained. “The extinction event was massive,” Fairen said.

“Our results show for the first time that providing suddenly large amounts of water to microorganisms – exquisitely adapted to extract meager and elusive moisture from the most hyperdry environments – will kill them from osmotic shock,” Fairen said. Osmotic shock here refers to a sudden influx of water to a cell through its membrane. The flood can literally cause bacteria to burst open.

The scientists estimate that this recent deluge was the first time rain has fallen in the Atacama in about 500 years. Despite this dry history, on March 25 and August 9, 2015, and June 7, 2017, the rains poured in. They suggests that these rains were caused by the changing climate over the Pacific Ocean, as climate models predict that such rains should only happen there once per century.

The Atacama Desert and its historic precipitation could parallel life on Mars, the researchers suggest. Like the Atacama, the planet is bone-dry today (water is locked in ice, or under the ground), but it once saw catastrophic floods that interrupted periods of extreme dryness. Such events would have been devastating to even microbial life, the researchers hint, assuming that it was even there.

The Atacama microbes were also observed to feed off nitrate deposits that formed in the desert about 13 million years ago. Similar deposits have been found on Mars as well, and it could provide another analog to Mars.

Additionally, the researchers think that they could use these findings to further explore experiments that the Viking spacecraft did in the 1970s. Martian soil was saturated with liquids in those experiments, and knowing that nitrate-fueled microbes can be harmed by water puts those efforts in a new light.

This research is published in Nature Scientific Reports