The dwarf planet gets its first close-up and revealsits own surprises. 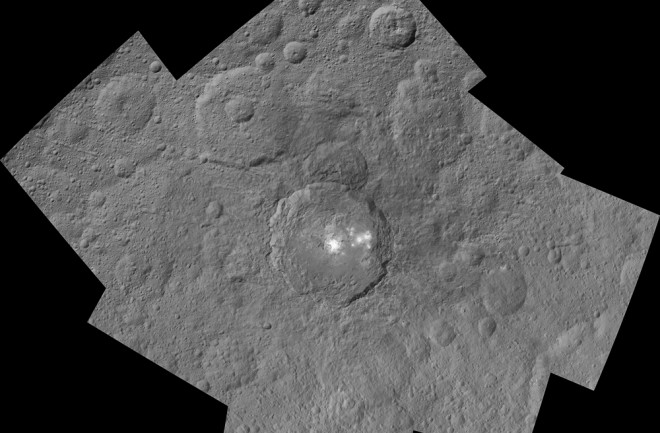 Occator crater, with its beguiling white spots, takes center stage in this photo from the Dawn probe. (Credit: NASA/JPL-Caltech/UCLA/MPS/DLR/IDA)

Pluto wasn’t the only dwarf planet to host a guest this year. In March, four months before New Horizons made it to Pluto, NASA’s Dawn probe entered Ceres’ orbit, becoming the first to see a dwarf planet up close.

Dawn launched in 2007 and visited asteroid Vesta first, keeping that rock company for 14 months before flitting off to its final destination: Ceres, the largest body in the asteroid belt between Mars and Jupiter. Hovering around Ceres like a nosy paparazzo, Dawn has been snapping photos and maneuvering ever closer since March. It was expected to reach its closest and permanent orbit, 230 miles above the surface, in December.

Ceres is so big, nearly 600 miles across, that astronomers considered it a regular planet for almost 50 years after its 1801 discovery. That size means gravity has pulled Ceres into a sphere, with a core of rock, an icy coating and perhaps an ocean of liquid water locked between. But Ceres remained fuzzy from afar, until Dawn revealed a fascinating world with miles-high mountains and miles-deep craters. Ceres’ surface is covered by landslides and plump with ice. The diminutive planet is more dynamic than scientists expected.

The Dawn space probe, with Ceres in the background. (Credit: NASA/JPL-Caltech/UCLA/MPS/DLR/IDA)

“Exploring a new world, even virtually, is a thrill,” says Carol Raymond, Dawn’s deputy principal investigator. The greatest thrill so far came from a crater named Occator, 2 miles deep. From inside, a cluster of bright spots stares out. Scientists believe they are splotches of salt, magnesium sulfate, perhaps left by saline water that bubbled — or maybe still bubbles — up from the underground ocean and splashes over the terrain.

In fact, the water on our planet likely came from preplanets much like Ceres. “Bodies like Vesta and Ceres were the building blocks of the solar system, like Legos,” says Christopher Russell, Dawn’s principal investigator. “Give me a bunch of corner pieces, and I can build something that looks like a house. Give me a bunch of Vestas, and I can make a dry Earth with a rocky core. Add a few Ceres, and I can fill the oceans and lakes and streams.”