What's It Look Like on the Doorstep of a Supermassive Black Hole? 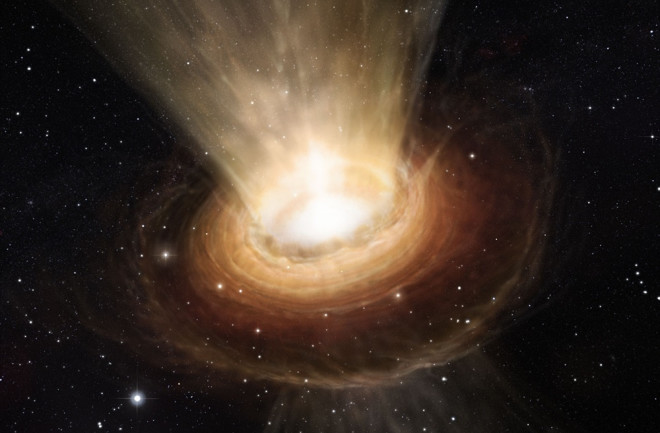 This artist's impression shows the area surrounding a supermassive black hole, including its dusty torus, hot accretion disk, and energetic jets. (Credit: ESO/M. Kornmesser) Supermassive black holes sit in the centers of all massive galaxies. Many of these giants are actively accreting material, earning them the name active galactic nuclei or AGN. As material falls in toward the black hole, it creates a disk that shines brightly and can even generate huge outbursts and jets. Compared with a galaxy hundreds of thousands of light-years across, the accretion disk around a supermassive black hole and the dusty structure that surrounds it are extremely small — on the order of just tens of light-years across. But two recent studies are finally giving us the up-close look we need to test our current models of supermassive black hole growth and evolution.

Astronomers use the “unified model” of AGN to describe the structure around a feeding black hole. It’s believed this structure and its orientation affect what we see, which is why not all AGN look the same. Part of this structure is a dusty, donut-shaped torus of material — gas and dust — around the black hole, shrouding part or all of it from view, depending on its orientation. Now, using the resolution afforded by the Atacama Large Millimeter/submillimeter Array (ALMA), astronomers have clearly imaged for the first time the rotation of a dusty torus around a supermassive black hole. Their target was the center of the spiral galaxy M77, which lies 47 million light-years away in the constellation Cetus. Using ALMA, they were able to identify emission from hydrogen cyanide molecules (HCN) and formyl ions (HCO+) associated with the gas and dust in the center of the galaxy around the black hole, zeroing in on a dense “donut” of material rotating around the central object. The work was published February 1 in the Astrophysical Journal Letters.

A supermassive black holes's torus (yellow-orange) of dusty material surrounds the accretion disk (blue-green) and singularity (black) in this artist's imagining. (Credit: ALMA [ESO/NAOJ/NRAO])“To interpret various observational features of AGNs, astronomers have assumed rotating donut-like structures of dusty gas around active supermassive black holes,” said Masatoshi Imanishi of the National Astronomical Observatory of Japan, and lead author of the paper, in a press release. “However, the dusty gaseous donut is very tiny in appearance. With the high resolution of ALMA, now we can directly see the structure.” That donut sits inside a 700-light-year-wide filamentary half-ring of material. The torus itself spans only about 20 light-years, an extremely small region of space compared with the larger galaxy M77. Using ALMA, the team was able to show Doppler shifting of the material in the donut, with some material moving away from Earth and some moving toward it — a clear sign of rotation. But that clear sign also carries with it additional complexities. The torus is rotating as expected, but it appears asymmetric and some of that rotation is also associated with random motion. The team believes this could be a sign of disruption, such as a past merger with another, smaller galaxy. More work is needed to determine the history of the galaxy and its AGN, but this first image of the rotating torus is a significant step forward in the study of galaxies and their supermassive black holes. Beaming Away Energy Many AGN — and their smaller, stellar-mass counterparts — are associated with jets of material spewing along their rotational axes. The mechanism behind launching these jets, and even the material that makes up the jets, is still poorly understood. But a new model based on measurements of the magnetic field associated with these jets offers possible insight into the amount of rotational energy lost by the black hole as it shoots these beams out into space. The model, developed by astrophysicists at the Moscow Institute of Physics and Technology’s Laboratory of Fundamental and Applied Research of Relativistic Objects of the Universe, connects the energy that goes into these extremely powerful jets to the rotation of the black hole itself, and provides astronomers with a measurable characteristic to test this idea. The work, authored by Elena Nokhrina, appeared December 22 in Frontiers in Astronomy and Space Sciences. Black holes are believed to rotate, just as stars and planets do. As material streams into them from their accretion disk, they absorb angular momentum and spin faster. This effect is also observed in young stars, which are surrounded by similar accretion disks of material. But nascent stars often spin too slowly for the amount of angular momentum they should be absorbing — that’s because the momentum goes into powering jets from these stars. The same process could be at work around black holes.

Left: ALMA data showing emission from molecules and ions in a horseshoe-shaped region about 700 light-years across around the central supermassive black hole. Right: Measured Doppler-shifted motion of the 20-light-year-wide torus around the black hole; red shows motion away from Earth, blue shows motion toward Earth. (ALMA [ESO/NAOJ/NRAO], Imanishi et al.)But to confirm it, astronomers would need to measure how much rotational energy is lost by the black hole, which is difficult. Similarly, measuring the amount of magnetic “flux” from accretion disk material that passes over the event horizon would give an estimate of rotational energy loss, but this is also difficult to measure. Now, Nokhrina’s new model — and other recent, more advanced models of black hole jets — suggests a proxy: measuring the magnetic field of the jets, which can then be tied into the amount of rotational energy required to power them. The jets' magnetic field can be measured, and “because the magnetic flux is conserved, by measuring its magnitude in the jet, we also learn the magnetic flux near the black hole,” said Nokhrina in a press release. Her work now allows astronomers to connect the magnetic field of jets to the rotation lost by the black hole, and test experimentally whether our understanding of how black holes and the disks and jets around them behave is correct, or still needs further refinement. All this comes just months before the expected release of the results from the Event Horizon Telescope, a worldwide network of facilities that in April 2017 spent a week and a half gathering data on the Milky Way's supermassive black hole, as well as the huge black hole in the elliptical galaxy M87. Soon we may have the first image of not only the torus around a supermassive black hole, but the edge of a black hole's event horizon itself. It's certainly an exciting time to be an astrophysicist.