What to Read, View and Visit in May

Supersize your summer movies with giant robots and zombie gore galore. Also: Iron Man is rust-free at 50, a museum to count on and why you don't have a jetpack. 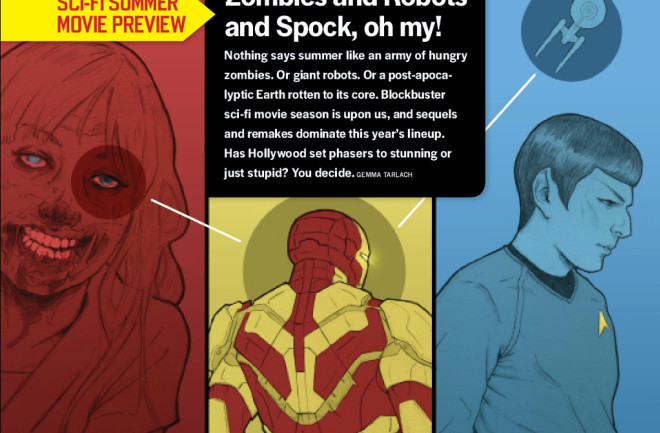 After the wild success of 2009’s franchise reboot, stakes are high for Kirk and crew as they fight both an intergalactic terrorist and the dreaded Sophomore Slump. Director J.J. Abrams won’t confirm rumors this outing is a retelling of The Wrath of Khan, but with the reliably intense Benedict Cumberbatch (BBC’s Sherlock, The Hobbit) on board as the villain, does it really matter? (Chris Pine, Zachary Quinto; Paramount, May 17)

For many teenage boys, a road trip with dad is awkward. Now imagine that trip is intergalactic, and you crash on Earth a thousand years after your species, humans, fled the planet. Dad is severely injured, and you must find help in an alien world where megafauna have replaced you at the top of the food chain. Now that’s awkward. M. Night Shyamalan (The Sixth Sense, Signs) directs. (Will Smith, Jaden Smith; Columbia Pictures, June 7)

How do you make an American icon and the arguable granddaddy of modern superheroes seem fresh? Get some storyline input from the guy who made Batman soar again (Christopher Nolan, The Dark Knight) and add a Kryptonian villain who’s evil incarnate. (Henry Cavill, Russell Crowe, Amy Adams; Warner Bros., June 14)

Based on Max Brooks’ best-selling novel but plagued by technical and creative glitches, Z has mixed buzz in Hollywood. It’s not dead yet, however. A terrifying trailer has resurrected hopes for this brainy take on fighting a zombie pandemic. (Brad Pitt; Paramount, June 21)

The billionaire with the bespoke, bullet-stopping suit faces down a lord of the rings: the Mandarin, a descendant of Genghis Khan who gets his superpowers through finger jewelry he nicked from a crash-landed alien ship. (Robert Downey Jr., Gwyneth Paltrow, Ben Kingsley; Disney, May 3)

In the year 2159, privileged humans live on a posh space station managed by a ruthless autocrat; everyone else is stuck on a ravaged Earth where only a bald Matt Damon can save us. (Jodie Foster, Matt Damon; Sony Pictures, Aug. 9)

Robert Downey Jr.’s slick take on Tony Stark, introduced to the silver screen in 2008, returns in this month’s Iron Man 3. But don’t think that the original Iron Man, who turns 50 this year, is showing any signs of rust. The Marvel superhero, first seen in a March 1963 issue of Tales of Suspense, is busier than ever with his own eponymous comic-book series. He’s also taking an extended leave from the Avengers to join Guardians of the Galaxy, an intergalactic superhero team. Axel Alonso, Marvel editor in chief, tells Discover Associate Editor Gemma Tarlach that Iron Man has no plans for early retirement.

Why does Iron Man remain so popular, 50 years after his debut?

Iron Man is unique. If there’s a more flawed superhero, I’ve yet to find one. Tony Stark’s hubris fuels him, his vices almost undo him, yet he perseveres because of his winning combination of brains and heart. And remember: Tony Stark is a self-made superhero; he was never endowed with any superpowers by an outside source. He put that big brain of his to work and made himself into a superhero.

How does Marvel keep its superheroes current with technology and cultural trends without changing a character’s appeal?

If you stay true to the core values of the character — the stuff that doesn’t blow in the winds of change — you’ll stay on course. Tony is a forward-thinking dude who sees what’s on the horizon, both in terms of new technology and cultural trends, but he’s not the type to don them like the latest pair of sneakers. He has values that he’ll always stand for, and flaws that he’ll always contend with.

Do superheroes age? Should they?

A superhero’s story — his journey — is never over. He should reflect the times and evolve as a product of his life experience, but never stop discovering new stuff about the world or himself. Because that’s when he becomes static. That’s when he’s truly old. It’s not about graying temples; it’s about a mind-set.

What can we expect from Iron Man in the next 50 years?

Expect Tony to be the guy who always thinks he’s the smartest guy in the room, and to probably be right.

What happened to the flying cars the future promised us? And while we’re at it, where are our jetpacks? Lehto’s detailed chronology of “individual lift devices” is on the dry side, but you learn the sober truth about why these machines never took off: Flight times were measured in seconds rather than minutes; the devices often cost as much as a luxury car; and there was no elegant solution for a malfunctioning jetpack in midair. Until these engineering obstacles — among many mentioned in the book — are overcome, don’t expect personal flight to become a reality anytime soon. –Dave Lee

The Origin of Feces

When veterinarian and epidemiologist Waltner-Toews persuades guides on an African safari to make a detour to watch dung beetles — “the Rumpelstiltskins of the animal world” — at work, the other tourists are not amused. Their loss. Because anyone squeamish about his chosen subject will miss out on an eye-opening perspective rarely aired in polite circles. Laced with cheeky wit — even the title is a sly nod to Darwin — Origin reveals a global web of waste and how our attempts at its “management” have unintended ecological, social and economic consequences. –Gemma Tarlach

The Anatomy of Violence

Are some of us born violent? Psychologist Raine presents mounting evidence that leads criminologists to think so. Anatomy traverses genetic, neural and environmental precursors to violence, yielding many surprises: Did you know, for instance, that children with low resting heart rates are more likely to commit crimes in adolescence? Acknowledging the impact of family and socioeconomic status on behavior, Raine argues even these factors are best understood through their effects on the brain. He envisions a future when the criminally predisposed are pre-emptively detained and given therapy. Raine leaves it to the reader to judge the ethics but says the science is on its way. –Lisa Raffensperger

The King of Random, aka Grant Thompson, is this year’s winner of the Citizen Science contest sponsored by DISCOVER and Instructables. Thompson’s nine-minute video details step-by-step construction of an oxyhydrogen generator, using electricity from a car battery to convert water into hydrogen.

“With a simple technique, we can turn one of the most abundant materials on Earth into a highly explosive gas,” Thompson says in the video. “Some people say that this is the fuel of the future.” Check out the rest of the entries at the Instructables website. –Breanna Draxler

Doodles. Trees. Roller coasters. Music. What do they have in common? Math, of course. The Museum of Mathematics, nicknamed MoMath, celebrates the math found in everyday objects and activities as well as more abstract theories. Since opening in December, MoMath has continued to add to more than 30 hands-on exhibits, offering different levels of interaction based on age and degree of understanding. Visitors can ride square-wheeled tricycles, create fractals using feedback, use a calculator made of string and paint in water, converting even the worst mathphobe into a number lover. –Gemma Tarlach