What to Read in June

Why libraries matter, the history of science, and separating the wheat from the chaff. 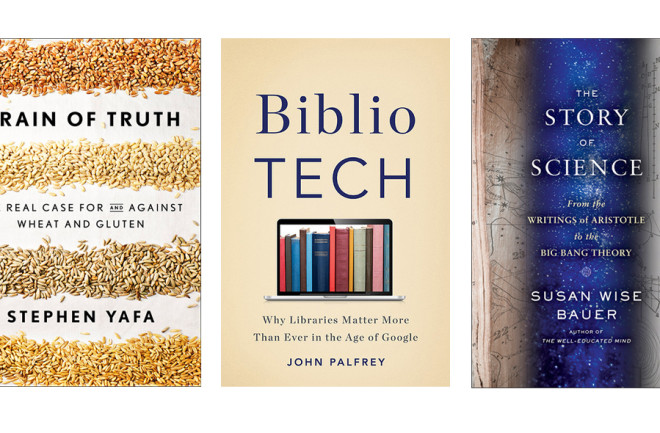 The Story of Science

The touchstone texts of science were not written in a void. Historian Bauer introduces readers to the stories behind the words of some of history’s most radical thinkers and theorists. Alfred Russel Wallace, for instance, ill and forced to lie in bed for hours a day with “nothing to do but think,” developed a theory of natural selection at nearly the same time as Charles Darwin. From the work of Hippocrates to Isaac Newton to Richard Dawkins, Bauer dumbs nothing down but makes complex topics comprehensible in just a few pages apiece. The results are accessible as a companion book with individual snippets on specific publications, or as an overall tour through the history of science. — Elisa Neckar

From a bank of computers at a small-town library to mammoth case-law books piled on wooden tables at a university, today’s libraries must straddle the analog and digital worlds. Palfrey argues for a national knowledge network, hinging on what he calls — in a positive way — the hacking of libraries. How do we move collections online while also staying true to libraries’ century-old mission as vital community spaces? Look to the vast New York Public Library’s digitization effort, as well as the Boston Public Library system, which has collaborated on modernization efforts with towns across Massachusetts. Now, says Palfrey, we just need capital: a modern-day Carnegie to help preserve libraries as digital platforms for ideas. — Becky Lang

Is there any other mainstream foodstuff so maligned as wheat has been of late? What’s worse, the actual science too often gets lost in the pop culture circus dominated by publicity-hungry hucksters and companies pushing gluten-free products full of chemical thickeners and starchy substitutions. Fortunately, Yafa is here to separate, uh, the wheat from the chaff, taking on everyone from anti-wheat advocates to geneticists and old-school artisan bakers. Yafa’s background as a novelist and playwright comes through in his lively pacing and witty asides, but it’s his commitment to cutting through the hype and hokum that makes Grain of Truth so compelling. — Gemma Tarlach