What to Read and Visit in December

Hunt neutrinos, moonwalk with Max, dissect creepy crawlies and see the "fin"-ishing touches on Utah's new aquarium. Then wash it all down with a big gulp of soda history. 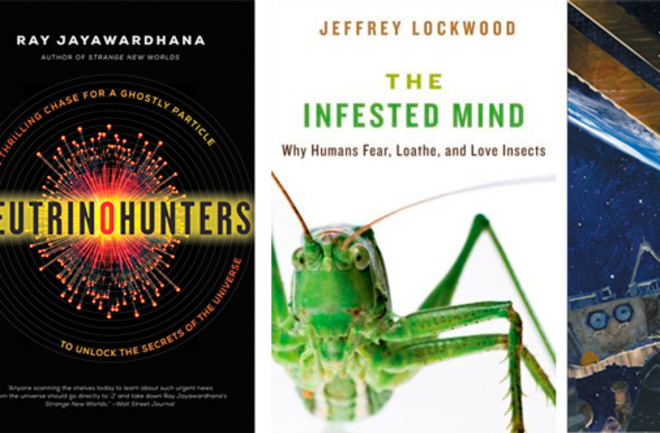 Whether you call it soda or pop, the bubbly beverage has become ubiquitous during the past century. Mobsters used it to cover up the mouth-burn of bootleg liquor during Prohibition, while industry giants promoted it as more than just something to sip, such as Coca-Cola being marketed as a symbol of America in the WWII era. Donovan charts a refreshing albeit number-heavy history of fizzy drinks, from the first “fixed air” waters to ever-sweeter iterations that have changed how the world quenches its thirst.  — Breanna Draxler

“I have done a terrible thing,” wrote physicist Wolfgang Pauli in 1930 while investigating a type of radioactive decay. “I have postulated a particle that cannot be detected.” Pauli’s particle — eventually known as a neutrino — was not undetectable after all. But massive instruments were needed to find and study the subatomic ghost. Among them: a 380,000-liter tank full of dry-cleaning fluid in a South Dakota gold mine and a cubic kilometer of ice packed with light-sensitive orbs at the South Pole. Jayawardhana’s storytelling skill shines as he follows scientists handing off work from one generation to the next, culminating in a better understanding of the tiny particle with a surprisingly big role in the universe. — Ernie Mastroianni

What better writer to wax poetic about insects than Lockwood, who teaches ecology, philosophy and creative writing at the University of Wyoming. Lockwood uses the full range of his diverse skill set as he dissects what bugs us about bugs, even as they captivate us (well, some of us). Whether describing a “riot” of grasshoppers as “a bristling carpet of wings and legs,” explaining why insects often show up in hallucinations or tracking creepy-crawly cultural attitudes, Lockwood weaves science, history and the sheer joy of sharing knowledge into a book that’s hard to put down. Unless it’s with force. On a spider. — Gemma Tarlach

Max Goes to the Space Station

Not every dog gets to go into space, but Max does! The jumpy and lovable Rottweiler is the hero of a long-running science adventure series; in this new prequel, Max saves the day when there’s a gas leak in the International Space Station. Author Bennett included facts from real astronauts who have been in space, which I really liked, along with Carroll’s watercolor illustrations. Overall I liked this book a lot. It was fun and exciting to read. — Guest Reviewer Enzo DeMay, Age 10

Big Fish in a Bigger Pond

Half a million gallons of water may be a drop in the bucket of an ocean environment, but it’s a tripling in size for the Salt Lake City-area aquarium, which moves to a new and greatly expanded home in a southern suburb. The shark tank alone will be 20 times the size of the exhibit at the previous location, and features a walk-through tunnel, the better to ogle the 2,000 animals that will call it home.

Other attractions include a trio of touch pools, a roomy habitat for penguins and special galleries for rainforest and deep-sea creatures. Tentatively slated to open in December, the Draper location’s doors will stay shut until the animals have acclimated to their new home, so check the website before planning your visit.