What Time is it on Saturn? We Finally Know

Using a new strategy, one researcher believes that he has solved the longstanding mystery of the length of a day on Saturn. 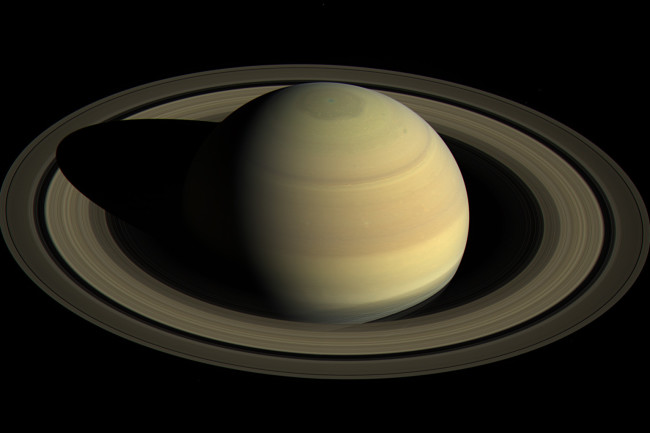 For years, the length of a day on Saturn has remained an unsolved puzzle to frustrated astronomers. But now, a graduate student from the University of California Santa Cruz believes that he has finally solved the mystery. Christopher Mankovich used the planet’s rings to determine that a day on Saturn lasts for 10 hours, 33 minutes, and 38 seconds.

Being a gas giant, Saturn has no solid surface that researchers can track in order to time the planet’s rotation. Because of this, it’s been tricky for them to figure out when a day starts and ends. For Jupiter, another gas giant in our solar system, scientists figured out the length of a day using the planet’s radio emissions. But Saturn’s strange magnetic field means that the same measures used on Jupiter couldn’t be used.

Mankovich’s estimate — 10:33:38 — is faster than previous estimates from 1981 made with radio signals from NASA’s Voyager spacecraft that suggested a day on Saturn to be 10:39:23. This discrepancy is likely because Saturn’s magnetic field is almost perfectly aligned with its rotational axis — unlike Jupiter.

“Our approach was new in that we applied seismology — literally, the study of the way things shake — to get at the length of a Saturn day,” Mankovich said in an email.

Using data captured by NASA’s Cassini spacecraft, Mankovich found that wave patterns within Saturn’s rings are the result of ring particles feeling “extra tugs” from the planet’s gravitational field. “These extra tugs in Saturn’s gravity field come from the planet itself oscillating,” Mankovich said. “Just like the properties of earthquakes teach us about the inner structure of the Earth, the precise frequencies of the ring waves caused by Saturn’s oscillations give us a handle on the inner workings of Saturn, including its rotation.”

By tracing Saturn’s seismic activity through wave patterns in its rings, Mankovich was able to find that Saturn’s interior vibrates at frequencies that cause variations in the planet’s gravitational field. Particles in the planet’s rings then pick up on those variations. These findings allowed Mankovich to develop models of Saturn’s internal structure that match the rings’ waves. With these models, he was able to track the movement of Saturn’s interior and, therefore, the rotation rate and length of a day.

And the results came as somewhat of a surprise even to Mankovich.

“For giant planets, the real burning questions that astronomers have are mostly about how these planets form, and to answer those questions we want to understand things like whether Jupiter and Saturn have discrete, dense cores versus more complicated, mixed-up interior structures,” Mankovich said. “So as we got into the interpretation of these ring waves, what I absolutely didn’t expect was that the majority of the ring waves that we were able to explain told us quite a lot about the rotation, and actually very little about these open questions regarding the deep structure inside Saturn.”

“Now we’ve shown that these waves are extremely valuable for zeroing in on the length of a Saturnian day, and so from that perspective, it’s advantageous that most of the waves aren’t terribly sensitive to these open questions regarding the deep interior, which would have muddied their interpretation,” he added.

The research was published Jan. 17 in the Astrophysical Journal.