What object fell on Brazil? 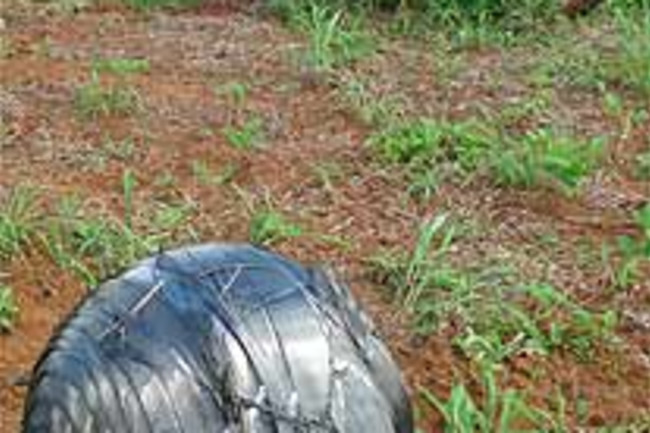 Jim Oberg sent me an odd note: a news article from Brazil has pictures and a description of a weird thing that fell to the ground a few hundred kilometers south and west of Brasilia (translated in the email Jim sent me):

An unidentified object fell on a farm on Goias, Brazil. The farmers are afraid that the object may be something radioactive or part of something dangerous. So far, it seems that the local police discards the possibilities of it being a weather balloon. The object has approximately 1 meter in diameter; it is made of steel and covered in some kind of plastic. It has an axle inside and seems to be of copper.

Anyone have any clue what this thing might be? I'm not sure if it came from an airplane or from orbit; there don't appear to be any burn marks, but sometimes space debris doesn't have them. Still, beats me. I know a few aeronautical engineers and rocket scientists read this blog, so if you have any thoughts, pipe up! Weird.

Update: We seem to have a winner. It looks very much like a fuel tank, called a composite overwrap pressure vessel. Robin Titus in the comments was the first to specify, for the record. He wins nothing. As a personal friend of mine, though, he has already won.