What Is the Search for Extraterrestrial Intelligence Actually Looking For? 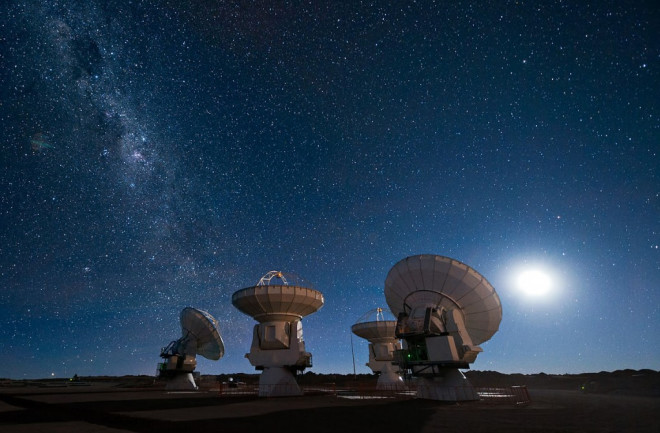 Four antennas of the Atacama Large Millimeter/submillimeter Array (ALMA). Credit: ESO The Search for Extraterrestrial Intelligence (SETI) last week got a $100 million dollar shot in the arm from the wealthy, Russian Silicon Valley entrepreneur Yuri Milner. At the London launch of this new project, dubbed Breakthrough Listen, Stephen Hawking made some inspiring observations:

To understand the universe, you must know about atoms — about the forces that bind them, the contours of space and time, the birth and death of stars, the dance of galaxies, the secrets of black holes. But that is not enough. These ideas cannot explain everything. They can explain the light of stars, but not the lights that shine from planet Earth. To understand these lights, you must know about life, about minds. Somewhere in the cosmos, perhaps, intelligent life may be watching these lights of ours, aware of what they mean. Or do our lights wander a lifeless cosmos – unseen beacons, announcing that here, on one rock, the universe discovered its existence. Either way, there is no bigger question. It’s time to commit to finding the answer – to search for life beyond Earth. The Breakthrough initiatives are making that commitment. We are alive. We are intelligent. We must know.

Let’s take a careful look at Hawking’s logic. He said: “We believe that life arose spontaneously on Earth. So in an infinite universe there must be other occurrences of life.” We have good reasons to believe that life arose spontaneously on Earth, but there are many things that “arose spontaneously on Earth” that have almost certainly not occurred elsewhere. Stephen Hawking is one of them. The English language is another. How about Hawking speaking English with an American accent and Milner speaking English with a Russian accent, in London. How many Londons are there in an infinite universe? How many Londons with Stephen and Yuri speaking English with their accents? If we include a little bit more detail, things get quirkier. Stephen may have had wheat, milk and orange juice in his stomach. Yuri, coffee and a banana. This whole quirky assemblage “arose spontaneously on Earth.” But arising spontaneously does not mean there will be other occurrences of it in the universe. The mission of the starship Enterprise was “to boldly go where no one has gone before.” If that mission had been to boldly visit other planets to seek out a wealthy 51-year-old Russian named Yuri Borisovich Milner with coffee and a banana in his stomach and a brilliant Englishman named Stephen Hawking with wheat, milk and orange juice in his stomach, then Kirk and Spock would never have returned. So whether we should expect other occurrences of something elsewhere does not depend on whether that thing arose spontaneously on Earth. It depends on how generic that something is. Is life some generic feature of wet planetary surfaces that emerges frequently? Or is life something as quirky as coffee and bananas? We don’t know. And neither does Hawking.

Measuring the quirkiness of something is not easy. For example, species with heads are quite common. Heads seem to be a general feature – so common among our relatives that one succumbs easily to the notion that having a head is standard issue, on Earth and beyond. But if we go back about 600 million years, there was only one species with a proto-head on Earth, and this species was the common ancestor of all species alive today that have heads. Heads are monophyletic, meaning they evolved once. They are as quirky as a single species. They are as quirky as a naked mole rat or a sulphur-crested cockatoo. Couldn’t “life” be similarly quirky?

Our inefficient use of energy makes the Earth shine at night. If natural aliens are less wasteful, their planets will not shine. Credit: Craig Mayhew and Robert Simmon, NASA GSFC

Hawking also said that to understand the lights of Earth, you must know about life and minds. What are these lights that shine from planet Earth and what do they mean? I think those lights mean that someone left the lights on. All of those lights are inadvertent waste. For the past 100 years the Earth has been wastefully beaming radio and TV signals into the universe, not because we wanted to share "I Love Lucy" with the universe, but because our broadcasting strategies were primitive. This “shining of the Earth” that Stephen suggests is a sign that the universe has become aware, is maybe more correctly interpreted as a sign that something on Earth has become wasteful. As we become more knowledgeable and efficient, signals that were once broadcast into space are squeezed into fibers. Earth will soon stop broadcasting its millions of mobile phone conversations. Routers and cell towers will migrate into the wallpaper of every living room. The Earth will stop shining. The conspicuous consumption of resources and the inadvertent beaming of info-waste into space will end.

Arthur C. Clarke wrote that “any sufficiently advanced technology is indistinguishable from magic,” but I think Karl Schroeder’s modified version may be more relevant for SETI searches:

Being “indistinguishable from Nature” is an interesting concept. I even wonder if we are “indistinguishable from Nature.” Maybe the universe is full of invisible tree-hugging “natural” aliens living sustainably on their planets – not polluting the universe with their info-waste. If Schroeder is right and these indistinguishable-from-Nature aliens are the only kind that survive the tests of time, then, to find them, SETI searches will need more than Yuri Milner’s $100 million dollars. Still, I wish them luck. When new instruments are trained on the sky, we often discover something new about the universe.