Welcome to the Geology World Cup 2018 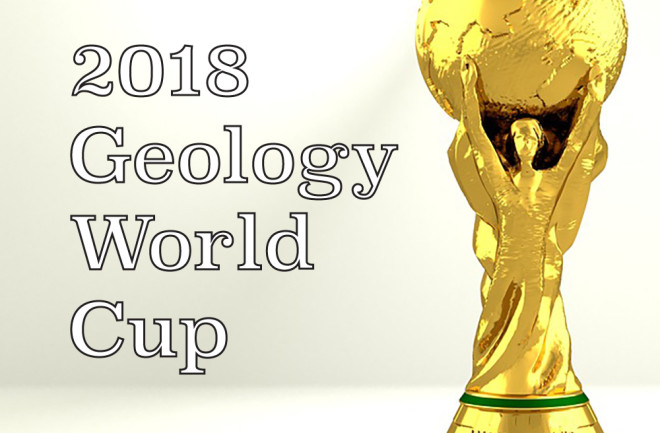 2018 Geology World Cup The 2018 World Cup starts today! One of the world's largest events of any kind will capture the planet's attention yet again and Rocky Planet will be hosting the first Geology World Cup. Back in 2014, I ran the Volcano World Cup, where I pit each country that qualified for the real World Cup against each other based on their volcanic features and history. You, the reader, got to vote on which country moved on each round until we crowned Chile as the first (and now only) Volcano World Cup winner. This time, I'm going even bigger. Instead of just the volcanoes of each country, we'll be ranking the geology of each country. And just like last time, you get to decide who moves through. Some big name countries won't even get a chance to compete - no Vesuvius or Etna (Italy), no Grand Canyon or Kīlauea (U.S.A.) and even the defending champion Chile won't be here. However, you'll see that there are some amazing geologic features you all love ... and some that you'll be amazed you didn't even know existed. So, starting today, I'll be opening up the Group Phase of the 2018 Geology World Cup, starting with Group A. Take a look at my synopses of each country (and I'm saving some features for later in case each country makes it to the next round, so don't get mad if your favorite isn't listed!) and then cast your vote in the poll below. Just like the World Cup, the top 2 teams in each group move onto the Round of 16. Group AEgypt: This North African nation is likely known more for its archeology than its geology, but the Nile River and its delta (see below) is one of the most important features in all of Africa. The country also borders an expanding new ocean basin in the form of the Red Sea and the plentiful sandstones are the basis for the pyramids.

Terra image of the Nile River delta in Egypt, seen in October 2014. NASA Earth Observatory. Russia: Although it is the host country of this year's real World Cup, it is also the lowest ranking team in the tournament. However, in the Geology World Cup, the tables are turned. Russia is by far the largest country of the 32 (although it does share a continent unlike one of our other competitors) and is the home to features like the volcanoes of Kamchatka (below), the Siberian Traps flood basalt province, the Ural Mountains, the permafrost of Siberia (and its frozen mammoths), vast oil reserves, the deepest lake in the world (Lake Baikal) and more.

Shiveluch in Kamchatka with a small ash plume seen from the International Space Station in July 2007. NASA. Saudi Arabia: When people think of Saudi Arabia, they think of two things: oil and deserts. That is really what defines the geology of the country, but did you know that there are potentially active volcanoes in Saudi Arabia? The country also borders the Red Sea on one side and the Persian Gulf on the other.

An outcrop of the Qusaiba Member, the primary source of the Ghawar oil field in Saudi Arabia. Conrad Allen/ESPOD. Uruguay: Unlike the soccer team, the geology of Uruguay lacks a star like Lionel Messi. That's not to say there aren't stunning features in the country. It has some of the oldest rocks in South America, dating back to the Precambrian reaching to 2 billion years ago. Parts of the major Paraná flood basalt province also resides in Uruguay (along with fellow competitors Brazil and Argentina) but likely is found under younger rocks across half the country. The southern boundary of the country is defined by the Rio de la Plata (below).

The tan/brown line in the middle of the image is the Rio de la Plata and its muddy waters are entering the Pacific Ocean. To the north and east of the river is Uruguay. NASA.

So, who should advance? Click here to cast your ballot!