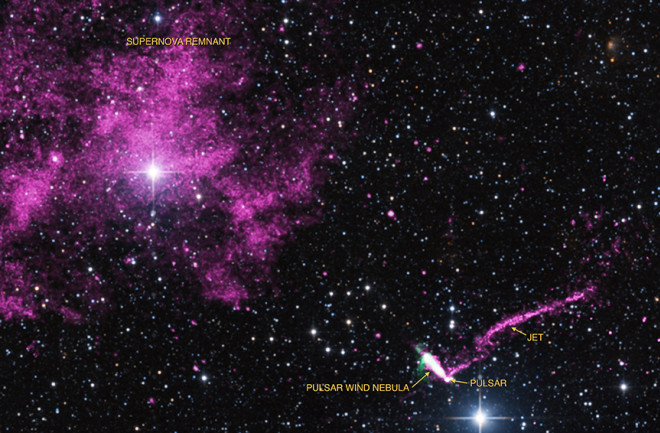 Credit: X-ray: NASA/CXC/ISDC/L.Pavan et al, Radio: CSIRO/ATNF/ATCA Optical: 2MASS/UMass/IPAC-Caltech/NASA/NSF The thing about space is that it’s pretty huge and vast and superlative. There’s a reason something with a lot of zeroes in its price tag is said to have an astronomical cost. So when astronomers, used as they are to working with the biggest or oldest or coldest or something-est things in the universe, are impressed by an object’s stats, you know it’s a big deal. It’s in that spirit that I present to you a spinning husk of a dead star traveling at millions of miles per hour shooting a spiraling jet longer than any known in our whole galaxy — and in a weird direction to boot. Got all that?

Pulsar? But I Just Met Her!

The object in question has the cute little name of IGR J11014-6103, so let’s just call it Igor. Igor’s got a lot going on. He’s fundamentally a neutron star — a super dense star made out of just neutrons — that was once a bigger, more normal star that blew itself apart. Some neutron stars, like Igor, also spin around quickly while spouting huge jets of radiation; these can look like stars winking on and off like a light house, hence their classification as pulsars, or pulsating stars. Astronomers had already discovered Igor with the European INTEGRAL satellite, though they weren’t sure what it was. A recent paper inAstronomy & Astrophysics shows that not only is Igor a pulsar escaping from the nearby supernova remnant SNR MSH 11-61A (the stuff shrugged off by Igor when it exploded), but that it’s got some crazy attributes. Specifically, it’s traveling between 2.5 million and 5 million mph, making it one of the fastest pulsars ever spotted, and the fastest ever that also produces a jet. And it’s this jet that really makes Igor stand out. It’s blasting high-energy X rays into space, leaving behind a tail some 37 light-years long — almost 10 times the distance between our sun and its nearest star. The jet also has a corkscrew pattern, implying that the Igor’s wobbling around like a top. That's weird.

And there’s one more oddity about Igor: its jet is almost exactly perpendicular to its direction of motion, the first time astronomers have ever seen such a thing. This probably means that when Igor’s progenitor star blew up, it gave the resulting pulsar a sideways “kick” misaligned to its spin. Just how such a thing is possible isn’t really clear, but it does prove that weird and wacky stuff goes on during stellar explosions — even more so than we already thought. So as scientists try to figure out how odd, misshapen Igor came to be, we can simply enjoy one more example of the universe’s extremes. Though, one must admit, there does seem to be something strangely familiar about a star reinventing itself and rapidly trying (but failing) to outrun its past...