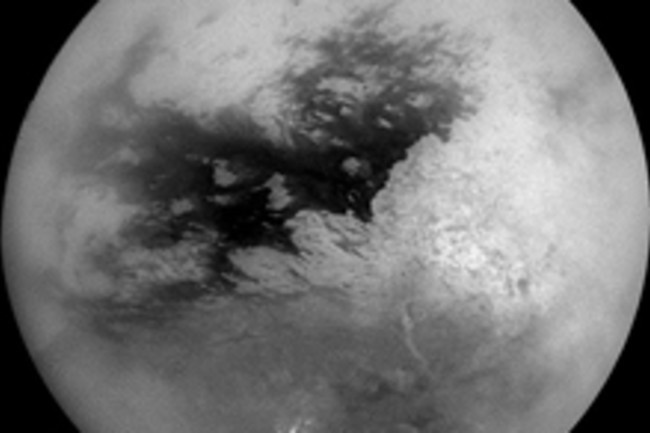 If there were life on the Saturnian moon of Titan, the thinking goes, it would have to inhabit pools of methane or ethane at a cool -300 degrees Fahrenheit, and without the aid of water. While scientists don't know just what that life would look like, they can predict what effects such tiny microbes would have on Titan's atmosphere. That's why researchers from the Cassini mission are excited now: They've found signatures that match those expectations. It's far from proof of life on Titan, but it leaves the door wide open to the possibility. In 2005, NASA's Chris McKay put forth a possible scenario for life there: Critters could breathe the hydrogen gas that's abundant on Titan, and consume a hydrocarbon called acetylene for energy. The first of two studies out recently, published in the journal Icarus, found that something—maybe life, but maybe something else—is using up the hydrogen that descends from Titan's atmosphere to its surface:

Erring on the side of caution, the scientists suggest that life is but one explanation for this chemical oddity. Perhaps some unknown mineral on Titan acts as a catalyst to speed up the reaction of hydrogen and carbon to form methane, and that's what accounts for the vanishing hydrogen. (Normally, the two wouldn't combine fast enough under the cold conditions on Titan to account for the anomaly.) That would be pretty cool, though not as much of a jolt as Titanic life. The second paper

, forthcoming in the Journal of Geophysical Research, addresses the second part in McKay's equation: acetylene, the would-be food for Titan microbes. In November of last year, Cassini scientists predicted a high level of acetylene

in Titans' lakes, as high as 1 percent by volume. But this study, using the Visual and Infrared Mapping Spectrometer (VIMS) aboard Cassini, did not find that:

Models of Titan's upper atmosphere suggest that significant amounts of acetylene should be produced by the reactions there, and this would provide an excellent source of carbon to any hypothetical metabolisms. The surprise of the second paper is that there's very little acetylene to be found on Titan's surface [Ars Technica].

Again, life is not required to account for the lower-than-expected level of acetylene. The team did find the molecule benzene, and there are possible chemical reactions that could make acetylene into benzene. But, as is the case with the hydrogen paper, scientists' knowledge of chemistry would suggest that you'd need a catalyst or something more to speed up the reactions and burn through all that acetylene. So something weird is going on down there. The big question—the life question—will wait for future data and probably future missions that allow researchers to unpack the peculiar chemistry of this massive moon. But we can't rule it out.

Note: Chris McKay has published his own post on the new finds; check it out here.

80beats: Hydrocarbon Lake on Saturnian Moon May Be a Hotspot for Alien Life