Weeding: It's Not Just for Gardeners

By Kayla Keyes, Mote Marine Laboratory Recent news about Australia’s Great Barrier Reef has been grim: the most recent aerial survey of the reef identified a stretch of bleached coral over 900 miles (1500 km) long, and scientists have declared the reef to be in a terminal stage. Studies have shown that losing the Great Barrier Reef would result in a globally destructive economic and environmental chain reaction, but despite all of the pressures threatening the future of our reefs a positive light shines brightly from Magnetic Island in Queensland, Australia. 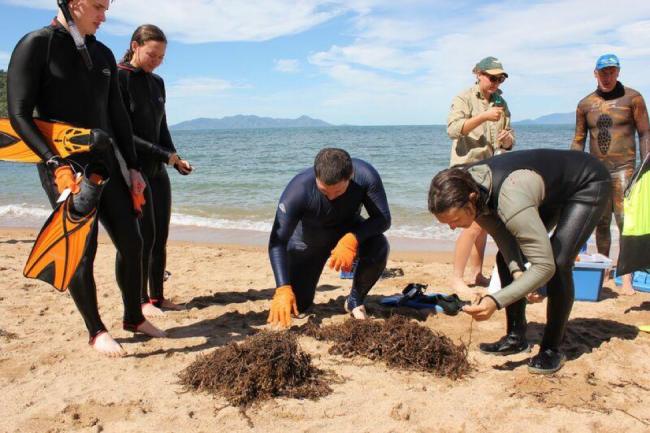 Miami University students counting sargassum plants. Dr Adam Smith, program director (back right), Magentic Island, May 2016. Reef Ecologic, a marine science and conservation organization, has teamed up with a number of partners to create a citizen science reef regeneration program meant to help new corals flourish and thrive. This unique project, Great Barrier Reef Recovery Program at Magnetic Island, was designed to not only help replenish the local reefs but to engage communities in citizen science and global conservation efforts. This initiative uses an approach to conservation advocated by the organization Rare, which focuses on building community-based conservation and related educational experiences. Participants work closely with Reef Ecologic to remove invasive macroalgae—seaweed— while learning how to practice conservation in their daily lives. In an interview with ABC NewsRadio, Reef Ecologic director Adam Smith said "Seaweed basically acts like a weed and it prevents juvenile corals from settling on these habitats, and it also excretes a chemical...So if we remove it, it's a bit like weeding on land - it then allows the species that you want to land, grow and develop." If this program can produce successful coral recovery in areas of macroalgae removal while also inspiring behavioral changes in participants, then it could change the game for reef recovery initiatives throughout the Great Barrier Reef Marine Park. The program, which is endorsed by the Great Barrier Reef Marine Park Authority, kicked off in March of 2016 and has had more than 230 participants so far. Over just a few trials, participants removed 700 lbs (310kg) of macroalgae from 300 square meters of marine habitat. Through action and collaboration, Smith believes that we can not only make a positive impact on the reef but we can inspire conservation-minded behaviors in participants through citizen science and stewardship. Smith also conducted a Tedx Talk featuring the Reef Recovery program at Magnetic Island as a push for more action to be taken in restoring declining areas of the reef. 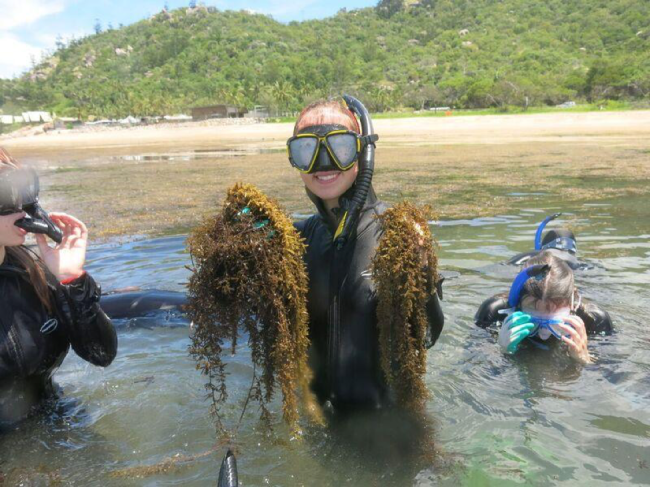 Georgia Tech students removing harmful sargassum from inshore coral reefs, Magnetic Island, March 2017. The support of all local and national stakeholders are essential to the success of this program. Moving forward with help from citizen science platforms, we can increase awareness and program support on a global scale for this project. It is this program’s mission to have community, industry and government working together by sharing knowledge, monitoring and taking action to restore coral reefs to a healthy state around Magnetic Island by 2025. Tourists and students who engage in the Great Barrier Reef Recovery Program on Magnetic Island will not only have the rewarding opportunity to contribute to the health of the reef, but they will also have taken part in groundbreaking citizen science that may one day change the way that the Great Barrier Reef is managed. Join the reef revolution, help protect the future of the Great Barrier Reef.