Weather Report From an Exoplanet Shows Winds of 4,300 M.P.H. 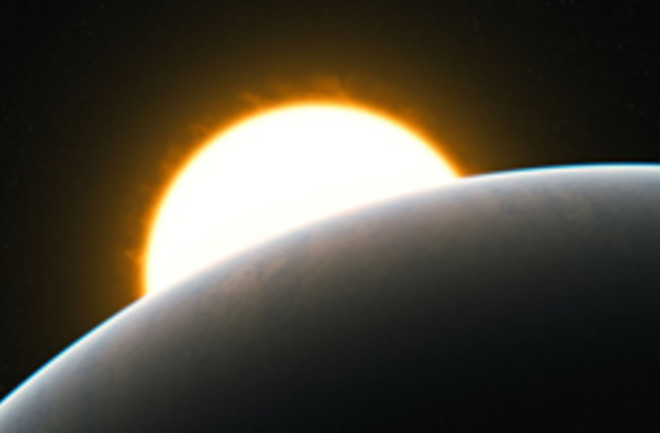 The most violent winds in our own solar system whip around the Great Dark Spot of Neptune at 1,200 miles per hour, making the worst storms here on Earth look like kid stuff. But when astronomers trained their telescopes on one of the longest-studied planets around another star, suddenly even Neptune didn't look so impressive. This week in Nature, astronomers say that the exoplanet HD 209458 b has a super-storm whose winds rage at 3,000 to 6,000 mph. The exoplanet (which we'll call by its friendlier nickname, Osiris) sits 150 light years from here, in the neighborhood of the constellation Pegasus. It's an old friend, too. Osiris was the first exoplanet seen transiting in front of its star back in 1999. A decade later, though, with technology a decade more advanced, the team could spy on Osiris with the a spectrometer at the Very Large Telescope in Chile and track its carbon monoxide signature. In fact, the VLT's data is so good that the astronomers could see not only the planet's orbital speed, but also the relative speed of the gas on its surface, according to study author Ignas Snellen.

"We see this clear change in velocity" of HD 209458 b, Snellen says. "There's also an offset—the gas during the transit seems to be moving toward us." The carbon monoxide appears to be flowing at two kilometers per second, or roughly 7,000 kilometers [~4,350 miles] per hour [Scientific American].

Why so stormy? Osiris is dangerously close to its star, creating a huge temperature imbalance.

Because the planet circles its star at a distance only one-twentieth of the distance between Earth and the sun, the temperature of the upper atmosphere on HD 209458b's sun-facing side is thought to be as high as 18,000 degrees Fahrenheit (10,000 degrees Celsius) while the dark side is much cooler. The upper layers of the atmosphere were observed rushing from the hot side to the cold side [MSNBC].

The team's data produced a second effect that, while drier than a splendorous super-storm, is perhaps more important to science. Up to now, astronomers have guessed exoplanet mass indirectly—seeing a star move oh-so-slightly and computing the mass the orbiting planet would need to produce that effect. But these scientists managed to figure Osiris' size directly once they determined its orbital velocity.

With relative ease, Snellen's team was then able to calculate the masses of both star and planet using Newton's law of gravitation, knowing also the velocity of the host star due to its orbit round the centre of mass of the system. "This is exactly the same method used to calculate the mass of binary star systems, except one of the bodies here is an exoplanet," says Snellen [Physics World].

80beats: First Ever Weather Report From an Exoplanet: Highs of 2240 Degrees