WATCH: Space Is the Place to View Meteor Showers 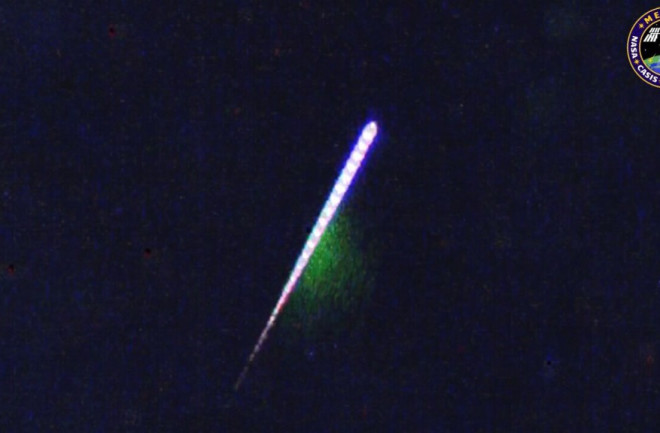 (Credit: NASA) For many people the finest Perseid meteor shower in 20 years was obscured by clouds — curse you atmosphere! But for the lucky crew aboard the International Space Station, viewing conditions are always perfect — they just look down instead of up. Given this excellent view, it was a no-brainer for scientists to set up a super-sensitive, high-definition camera in the station’s Window Observational Research Facility to record meteors as they zip through Earth’s atmosphere. The project’s camera made its first observation in July, and has been catching crystal-clear footage of meteors ever since. The top image, for example, is a meteor from the Delta Aquarids disintegrating over the Pacific Ocean on July 30. The green splotch you see is its plasma trail. On Aug. 10, the camera caught a couple bright meteors from the Perseid shower racing across the sky over Pakistan (that first flash is actually lightning). Of course, the Meteor project is about more than gathering stunning imagery. The camera can make spectroscopic observations of passing meteors, allowing scientists to gather information about their composition based on the wavelengths of light emitted as they burn. Knowing a meteor’s ingredients can help scientists figure out where it came from in the first place. Though it's possible to collect this information from the ground, there is less atmospheric noise distorting spectra observations recorded in space. The camera can also detect fine dust grains that burn high in the atmosphere that would otherwise be impossible to observe from earth. Plus, crew members on the ISS orbit Earth 16 times per day, which means they have over 9 hours of dark, unobstructed skies to watch and record the show — every day. Looking down, instead of up, at meteor showers is just another reason why being an astronaut remains the best job in space.