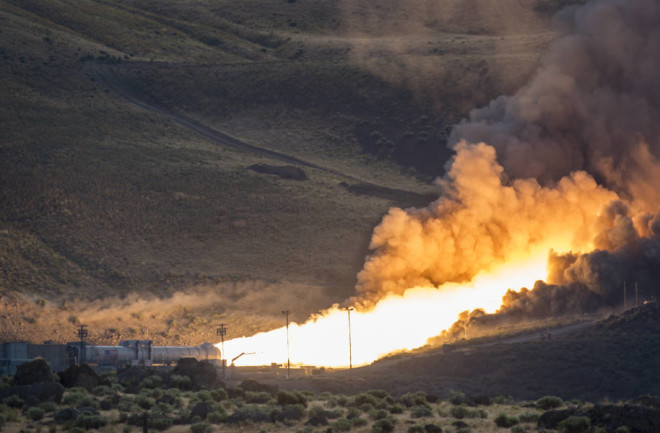 The second and final qualification motor (QM-2) test for the Space Launch System’s booster is seen, Tuesday at the Orbital ATK Propulsion Systems test facility in Promontory, Utah. (Credit: NASA/Bill Ingalls) NASA on Tuesday completed the second and final test of the solid rocket booster that's expected to take humans to Mars. The booster is one of two that will power the space agency's Space Launch System (SLS), along with four liquid propellant engines. NASA hopes to launch an unmanned version of the SLS by 2018, taking their Orion spacecraft on a journey beyond the moon and back. A previous test of the rocket in March 2015 at higher temperatures went off without a hitch — Tuesday's trial run took place around 40 degrees Fahrenheit to test the lower limits of the rocket's expected range as well as a new nozzle configuration.

[embed]https://www.youtube.com/watch?v=7yT8Sc-ifZw[/embed] The test in the Utah desert Tuesday lasted for two minutes and burned around 5 tons of propellant per second, generating some 3.6 million pounds of thrust all told. NASA engineers gathered data from 530 instrumentation channels to check off a list of 82 key objectives meant to assess the rocket's readiness for flight. There's no word yet on how the rocket performed, as engineers are still analyzing the data, but from a bystander's perspective, the test was a roaring success. Roughly 13 million tons of concrete held the rocket down as it thundered to life. The anchors were complete with load sensors that allowed engineers to measure how much thrust the booster was putting out. Also necessary at these tests are a quench system that injects carbon dioxide into the rocket's exhaust to quell the flames and jets of water to cool the engine's housing so that it can be used again. The five-stage SLS will put out some 15 percent more thrust than the Saturn V boosters that carried astronauts to the moon and can carry up to 77 tons of cargo. The booster was constructed by Orbital ATK, an aerospace company that also makes the Cygnus spacecraft currently used for delivering cargo to the International Space Station. A second-generation design called SLS Block 2 is designed to carry humans to Mars, and will have a payload capacity of 143 tons.