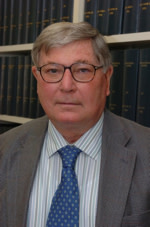 I'm very sad to report that Wallace Sargent, a distinguished astronomer at Caltech, died yesterday. Wal, as he was known, was a world leader in spectroscopy and extragalactic astronomy, with a specialty in studies of quasar absorption lines. He played a crucial role in numerous major projects in astronomy, including serving as the director of the Palomar Observatory. He was awarded numerous major awards, including the Bruce Medal, the Helen B. Warner Prize, the Henry Norris Russell Lectureship, and the Dannie Heineman Prize for Astrophysics. A glance at Wal's home page will quickly reveal that he led an active an extraordinarily productive life. Those who knew him, however, will remember a warm and enthusiastic personality who was always happy to talk. He mentored numerous students, and contributed greatly to the spirit of Caltech's fantastically successful astronomy program. Our thoughts to out to his wife Anneila (also a distinguished Caltech astronomer) and all his friends and family.