Volcanoes Are (Still) Not the Cause of Global Warming 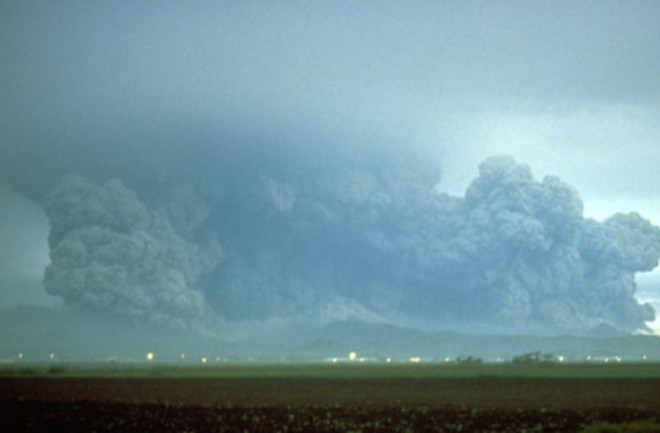 The plume from the 1991 eruption of Pinatubo in the Philippines. Richard Hoblitt, USGS A certain segment of the population here in the United States like to blame volcanoes for the increasing carbon dioxide in the Earth's atmosphere. We've been over this before and no, volcanoes don't hold a candle to humans in terms of emissions of that (and other) greenhouse gases each year. However, that didn't stop one of Wisconsin Governor (and potential presidential candidate) Scott Walker's advisors saying that a single volcanic eruption would set back at carbon dioxide emissions saved by shelving all the cars in the United States. Mike Huebsch is dead wrong, of course. Let's take a quick look at why he's so wrong. Using the estimates from Gerlach et al. (2011), all the volcanoes on Earth emit, on the high end, about 0.26 gigatons of carbon dioxide each year. That's 260 billion kilograms (or 5.7 x 10^11 pounds) of carbon dioxide. An eruption of Hawaii's Kilauea releases somewhere in the ballpark of 8,000-30,000 metric tonnes (17.6 million to 66.1 million pounds) of carbon dioxide. The 1991 eruption of Pinatubo, the second largest explosive eruption of the 20th century, released 0.05 gigatons (1.1 x 10^11 pounds) of carbon dioxide. Sounds like a lot, right? Well, in 2009, the transportation sector of the United States emitted 505 million metric tons (1.1 x 10^12 lbs) of carbon dioxide. If we just want to look at passenger cars, like Huebsch did, then we can look at it this way: there are ~136 million cars registered in the US and each of those (on average) emits 9,700 lbs of carbon dioxide each year. That works out to 498 million metric tons (1.3 x 10^12 lbs) of carbon dioxide. The rest is simple. - All the volcanoes/all the cars (annually): 0.438 (all volcanoes release only ~44% of the carbon dioxide of cars) - Kilauea/all the cars (annually): 0.00005 (Kilauea is 0.005% of the cars' emissions) - Pinatubo/all the cars (annually): 0.085 (Pinatubo is 8.5% of the cars' emissions) So, now you know. Volcanoes are merely a drop in the carbon dioxide bucket - and remember, volcanoes have been erupting at roughly the same rate for hundreds of millions of years. We are, by no means, in an especially volcanically-active time in Earth's history. You'd need at least 11 Pinatubo-size eruptions each year to eliminate the reductions of carbon dioxide emissions of all the passenger cars in the United States. But, you know, never let facts get in the way of a good anecdote.