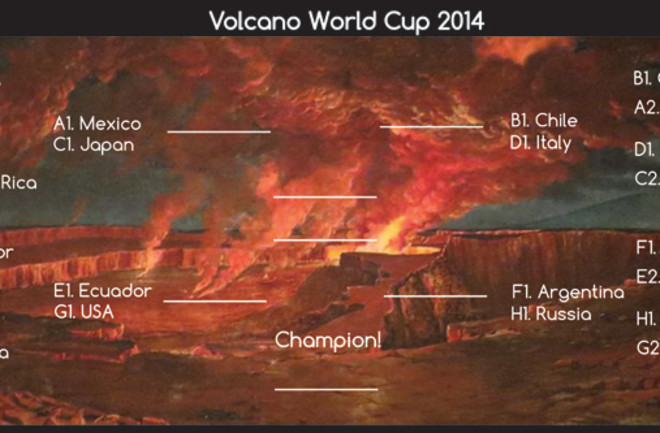 The 2014 Volcano World Cup Bracket: Quarterfinals. Illustration by Titian Peele, Kilauea at Night (1842, background image) The Volcano World Cup Quarterfinals are here! The last 8 are vying for the Semifinals -- and most teams that moved on won their matches handily. The closest game was Argentina's win over France by a score of 59% to 41%. Take a moment and vote in the Quarterfinals - voting will be open until 5 PM (EDT) on July 7!Game 1Mexico: Most people don't realize that the tallest volcano in all of North America isn't in the Cascades or Alaska, but in Mexico. Pico de Orizaba (see below) reaches over 5600 meters (18,600 feet) above sea level with 4.4 kilometers (14,400 feet) of relief from its base to summit. The volcano has produced at least 16 VEI 2-3 eruptions over the last 2,000 years, but has been quiet since 1846.

Pico de Orizaba in Mexico, the tallest volcano in North America. Photo by Oscar Daniel Rangel Huerta / FlickrJapan: Not all volcanism is destructive. Take the example of Japan's Nishinoshima (see below), in the Mariana Islands of Pacific Ocean. This island volcano has been growing since November 2013 and the lava flows from the small basaltic cone have more than doubled the area of the original island (all the dark is new lava, lighter is the remnant of the old island). This is how many islands in the middle of the ocean grow, as thousands of volcanic eruptions add new land.

Nishinoshima in the Mariana Islands of Japan, seen on April 15, 2014. Photo by Japan Coast GuardGame 2Chile: It is hard to convey just how volcano the landscape is in parts of Chile. I took the photo below when I was doing by Ph.D. research in northern Chile and really, it captures the long volcanic history of the nation. In this shot (which I've described here before), you get the deposits of a large explosive eruption (called an ignimbrite - foreground), a cinder cone (La Poruña - middle ground), the slopes of a potentially active volcano (San Pedro and San Pablo - mid-background, right) and an older composite volcano (Cerro Polapi, background, left). This is a record of millions of years of volcanism that continues today across much of the Chilean Andes.

The varied volcanism of the Central Andes of Chile. Photo by Erik KlemettiItaly: We've talked about Etna and Vesuvius, but the real monster in the Italy is the Campi Flegrei, a caldera that sits on the northern side of the Bay of Naples. This caldera is still very restless, causing the shorelines at Pozzouli to rise and fall multiple meters over the course of a few years. It also produced one of the largest eruptions in the last 100,000 years in Europe, the Campanian Ignimbrite. It has been over 475 years since the last small eruption (Monte Nuovo) at the Campi Flegrei.

The Campi Flegrei caldera, partially filled by the Gulf of Pozzouli in the Bay of Naples. Photo by NASA Earth ObservatoryGame 3Ecuador: One of the largest eruptions in Ecuador was from Quilotoa (see below). This volcano produced a giant VEI 6 eruption (roughly equivalent to Pinatubo in 1991) in ~1280 AD that not only spread ash far across the globe, but also had lahars (volcanic mudflows) that reached the Pacific Ocean, a distance of over 170 km! Quilotoa shares a lot of traits with Pinatubo - the volcano is fairly inconspicuous during its periods of quiet, but it has produced large explosive eruptions over the last 200,000 years. Today, a small crater lake sits in the 3-km caldera carved by that eruption.

The crater lake at Quilotoa in Ecuador. Photo by Warren Talbot / FlickrUSA: I decided to make this a caldera v. caldera match. The Cascades has its own massive caldera-forming eruption, sourced from Mazama in Oregon, or today more popularly known as Crater Lake (see below). Prior to the ~7,700 year old eruption, Crater Lake was home to a volcano that likely reached over 3,000 meters (10,000 feet). Then an eruption occurred that disgorged ~50 cubic kilometers of ash and debris that caused the volcano to collapse in on itself, forming the ~8 km caldera that is now filled with water. Wizard Island is evidence of volcanism after that cataclysm, building a small cinder cone that rises from the bottom of the lake.

Crater Lake in Oregon, with Wizard Island. Photo by Erik KlemettiGame 4Argentina: I have to say, I'm a little surprised that Argentina was able to overcome France in the Round of 16, but here we are. Now Argentina has to face of with heavy-favorite Russia. For this match, I chose to use a shield volcano located behind the main chain of the Andes, Payún Matru (see below). This volcano not only created a large caldera over 168,000 years ago, but also an astonishing 171-km-long lava flow, one of the longest on the planet.

The caldera and lava flow field of Payun Matru in Argentina. Photo by NASA Earth ObservatoryRussia: Gorely is another one of the active volcanoes on Russia's Kamchatka Peninsula and with many of the volcanoes in the region, they are more than they seem. Gorely itself is actually 5 volcanoes that have all formed inside a large caldera and over the last century, the volcanic complex have produced at least 9 eruptions. Right now, it is on Green alert status, so no active eruptions going on after a period of heightened seismicity.