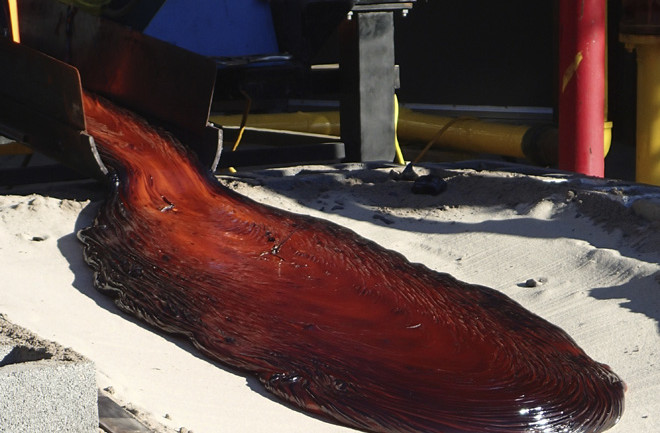 Manmade lava flow from the Syracuse Lava Project, "erupting" on September 19, 2013. Image: Erik Klemetti Last week I was able to attend one of the coolest science/art experiments in the country -- the Syracuse University Lava Project. Bob Wysocki and Jeff Karson are co-directors of the facility -- the former is in the Department of Visual and Performing Arts, the latter in the Department of Earth Sciences at Syracuse. This project is a mix of artistic expression in the form of molten basalt being poured onto various surface and a geologic experiment in, well, exactly the same form! This mini-man-made volcano in upstate New York (interestingly, right down the road from University of Buffalo's explosive equivalent) is one of the few places on the planet were researchers/artists generate their own lava on a scale this large. Most experiments looking at magma use very small volumes, sometimes down to the size of an aspirin, but at the Lava Project, hundreds of kilograms of basalt are melted and then used to make synthetic lava flows next to the Comstock Art Facility in Syracuse. A perfect after-class activity, to say the least.

Bob Wysocki trimming the end of the basalt lava flow experiment. Even as the lava cools to black, it is still close to 800-900C. Image: Erik Klemetti However, it isn't just fun and games -- this facility has produced real, scientific research. Ben Edwards at Dickinson College recently published an article in Geology that used data collected during an experiment of pour this lava onto ice to look at how lava and ice interact -- think of a micro-version of the Veniaminof eruption from this summer. They have been able to experiment with different compositions of basalt with varying amounts of dissolved gases to make more and less vesicular (bubble-rich) lava. They're thrown everything from steel ball bearings to olivine crystals into the lava to see how it might effect the viscosity and thus, how the lava behaves when it flows. They've generated pele's hair and pelee's tears from the lava pours that are similar to what you find in Hawaiian-style volcanic eruptions. They're changed the surface on which the lava flows, the angle it flows, the rate it is fed into the flow to try to mimic natural lava flows in different terranes. It is like having your own volcano where you can actually control the properties of the lavas and conditions of the land surface on which they are erupted. It is hard work -- even just melting the starting materials can be tricky. So far, they've melted Palisades sill basalt from eastern New York and an over billion-year old basalt from Wisconsin (the trick being getting enough to create hundreds of kilograms of lava, which isn't an east task). The chips with which they start the experiments will sometimes not fully melt, leaving residual chunks in the lava (which then effect the viscosity). Sometimes, strange reactions occur, like generating a gabbro after throwing olivine crystals into the molten basalt. Even the technical aspect of trying to film the event has been challenging, including charring and melting cameras and ladders along the way. When you're trying to make your own lava flows, I suppose hazards do come along for the ride. However, when you look at the lava produced in Bob Wysocki's crucible, it really does look like you just picked it up off the slopes of Kilauea. We were able to watch a standard lava pour (if you can ever call it that) onto a sandy surface. In the video from the start of the flow, you can see how sticky the basalt lava is even when heated to 1600°C. Remember, molten basalt is over 100,000 time more viscous that water, so it really looks like gooey taffy when it comes out of the crucible. However, once that lava starts flowing, it moves quickly (as lava goes) down the slopes. For a twist, water was poured on the sand at the end of the ramp with some interesting results (see the video above). As the lava reached the water sand, the flow slowed down and started to create large, baseball-sized bubbles (see video and image below)! This is due to the rapid creation of steam from the water in the sand, producing glassy bubbles and shards of volcanic glass (see video below). This effectively stopped the flow (expect for a small breakout that occurred on the edge). Some of the bubbles burst on their own, but some remained preserved like natural blown glass sculptures. Now, I saw natural lava flows in Hawaii this past March and although those lava flows and the Syracuse experiments were both basalts, the results were somewhat different. This is likely due to the differences in temperature -- in Syracuse, the lava in the silicon carbide crucible at close to 1600°C (where it is bright orange) and flows at close to 1200°C (darker red) thanks to the fact that it is right next to its "magma chamber". The lavas at Kilauea were kilometers from their source at Pu'u O'o, so they had already cooled some, producing the stickier, more viscous flow we saw. There is also the issue of volume -- the Syracuse flows are much smaller volume, probably only in the tens of cubic meters of lava, that even some of the smaller breakouts on the lava flow field at Kilauea were much larger than this whole show, but we're a long way to being able to generate manmade lava flows at the scale of a shield volcano like Kilauea.

Bubbles formed at the end of the lava flow after it began to run over wet sand. Many of the bubbles burst or were overrun by the lava, but some survived until the lava cooled. Image: Erik Klemetti I've already been pondering some experiments that could be done in the Syracuse lava facility, especially if you can mix multiple batches of molten magma before pouring. Not only could that offer some clues on the process we almost never see in action at real volcanoes, but it could make some truly spectacular lava features, tapping into both the artistic and geologic side of the project. This sort of collaboration is what I think is most fascinating about the Syracuse Lava Project: geologists have the expertise about the materials and how to apply the results to natural systems, the artists have the expertise to build the apparatus and run the experiment/performance. Hopefully more places will be willing to reach across the departments to think how art can help science and science can help art rather than staying in your sheltered departmental bubble. You never know, you might end up building your own volcano in your building because of it.

Be sure to check out all the videos of their experiments on Bob Wysocki's Vimeo site as well.

Video: Erik Klemetti (sorry about some of the shakiness and the fact I recorded in portrait, not landscape. Lava was just too exciting.)