Volcanic Crystal Forensics: What Minerals Tell Us About the Evolution of Mount St. Helens and Long Valley 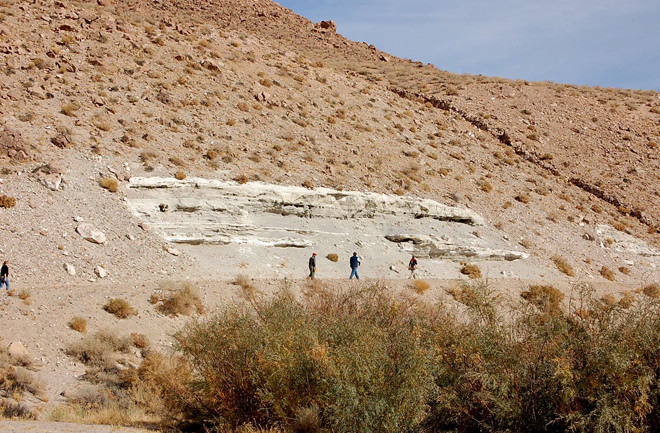 One of the major reasons I am a geologist is that I love history. I majored in both history and geology as an undergraduate because I am fascinated by unraveling what has happened in the past and what was the evidence that we can use to see those events. For me, it is the crystals in volcanic rocks that hold the key to understanding the evolution of magma at volcanoes -- they record events in crystalline structure through crystal growth, changing compositions of the crystals or incorporation of radioactive elements that can be used as a stopwatch. Even after the crystal forms, the elements are redistributed to show how time has passed. Two studies that came out this week examining St. Helens and Long Valley use these tools to unlock the unseen history of the volcanoes. These crystals hold the story of the volcano, in both the long and short term, and reading that history is what fascinates me. To read the history in crystals, you need to know that "ages" in geology don't all come the same. There are two types of ages when we consider almost any geochronologic information -- relative and absolute ages. The latter is straightforward -- an absolute age is one where you can assign a specific date to the event in question. For example, if I'm looking at the core of a zircon crystal (see example below) and I measure the U and Th content of that core, I can use the radioactive decay of these elements to determine the age of the core is 41,900 years. This age comes with some error based on the quality of your analysis, but it is a specific number of years that fixes that zircon in time. Absolute ages are derived typically through radiometric clocks, so using elements that decay like U, Th, C and K. On the other hand, relative ages can't tell us specifically when an event occurred, but rather how long it has been since some event occurred. One way that relative time can be determined by using the diffusion of elements in a crystal. Crystals suck in specific elements based on the composition of the magma and the structure of the crystal itself. If there is a dramatic change in the composition of the magma, the composition of some elements in the crystal change as well, creating a gradient. If you have a concentration gradient, you know, from even basic chemistry, that elements from the higher concentration side will move to the lower concentration side, taking a sharp boundary and making it more "relaxed". In crystals, this mainly occurs at high temperatures (magmatic conditions) and very slowly, typically the elements move at rates of 10 to 22 m2/s. (Diffusion is seen as a surface, thus the meter squared.) That is something between a zepto- and yoctometer, or, in other words, about 1 sextillionth to septillionth of a meter. However, when we have geologic timescales to do things, then we can actually see diffusion of elements in crystals if they sit in magma for years or more. This diffusion profile won't give us the absolute age of the crystal, but it does tell us the time since the compositional gradient formed and that crystal was sitting at magmatic temperatures (note: at the surface conditions, diffusion in crystals is so slow that it can, for all intents and purposes, be assumed to have stopped).

Crystals can also be used to fingerprint geologic events in the magmatic system beneath a volcano. Much like tree rings, crystals will grow, adding new layers. If you can measure the compositional changes in those rings, then you can try to match them to geologic events that you've examined outside of the crystal record. For example, if you have the compositional changes in a large volcanic system as measured in the whole rock composition of the erupted material, you could analyze the zoning in crystals to see those changes and match populations of crystals to specific events. An example is what I studied in zircon from the Okataina Caldera Complex in New Zealand, where the crystals recorded changes in the composition of the magma through time (see above), especially when looking at the Yttrium content of the zircon. In that study that came out last year in Earth and Planetary Science Letters, we could could absolute ages taken in the cores of the zircon with relative ages from the growth of the zircon to match the ups and downs in the crystal zones with those in magmas being erupted. However, these zircon came from the ~1300 A.D. eruption of Tarawera, so from a single eruption, you can look at the crystals to deduce the compositional history of the whole system as far back at 350,000 years. In the past week, two studies have garnered a lot of media attention for their application of what Jon Davidson might call "crystal forensics." One looked at how the compositional zoning and diffusion in pyroxene, another common volcanic mineral, can be linked to the seismic record (and thus magmatic intrusions) during the 1980s at Mt. St. Helens. The other looks at the Long Valley Caldera and uses diffusion in quartz (and other stopwatches) to determine that the accumulation of the large volume of magma that formed the Bishop Tuff likely only occurred hundreds to thousands of years before the eruption. Both of these studies use these concepts of reading the record in crystals to examine the history of the volcanic system -- and thus unlocking information that can unravel what leads up to an eruption.

The first study by Kate Saunders and others in Science examined pyroxene crystals erupted in lavas from 1980 to 1986 at Mt. St. Helens in Washington. By looking at the composition of the zones in the pyroxene crystals and how elements diffused in the crystals, they determined relative ages for the growth of rims on the pyroxene. Specifically, they examined iron and magnesium diffusion and calculated relative ages of the crystal zones based on when lava that the crystal was sampled erupted, assuming that diffusion stopped no earlier than the eruption of the lava. They also looked at whether the crystal was normally zoned (from high Mg core to high Fe rim) or reversely zoned (from high Fe core to high Mg rim). This correlates with temperature, where high Mg occurs during periods of higher temperature, so a reversely zoned pyroxene might mean that the magma heated back up. If you combine the diffusion ages and the zoning with the seismic record at St. Helens over that period (see right), you notice that rims grew most abundantly during periods surrounding seismic swarms -- likely new magma injection. Now, a lot of media attention on this study has been saying that this could be used as a "predictive tool" for eruptions at a volcano. That is stretching it way too far. Remember, these crystals need to be sampled from an erupted lava, so the volcano has to be erupting already! Not much of a predictive tool if the volcano is already erupting, now is it? It does show that the activity at St. Helens was caused by multiple intrusions over the 6-year span, which is an important piece of information when considering how long an eruption might last.

The second study by Guilherme Gualda in

tackled the Bishop Tuff that erupted from the Long Valley caldera ~750,000 years ago - one of the largest eruptions in the past few million years (what some might call a "supereruption".) Gualda covers a lot of ground in the study, but I wanted to focus on the diffusion of titanium in quartz, which he uses to determine the time between the initial accumulation of the large volume of magma that became the Bishop Tuff and its eruption. By looking at the boundary between the high Ti cores of quartz crystals and lower Ti rims and how Ti diffused (see below), the time that the quartz sat at magmatic temperatures can be estimated. What they find is that the quartz crystals were likely only at magmatic temperatures for a few hundred to up to 10,000 years, so a relatively short period of time (geologically). This contrasts with the zircon ages from the Bishop Tuff (from earlier studies) that date back 100,000s years. The study also looks at how melt inclusions in quartz crystals can be used to determine relative ages and how modeling the thermal conditions of the magma can be used to support the short timescales that the quartz crystals suggest. All of the data point to the conclusion that the large body of magma couldn't have accumulated more than a few thousands of years before the eruption.

Much of the media coverage for this study has been implying that the shorter timescales are for the generation of the magma leading to these large eruptions (along with the usual supervolcano fearmongering). However, that isn't really the case -- what this study talks about is the accumulation of magma into a large body, so the magma likely already existed. This is a concept that many in the volcano community support, where magma exists as pods and in-between crystals in a "mush" and is then extracted prior to the eruption. That extraction can be caused by an earthquake or new injection of magma below the mush, but the magma is there. However, once the magma has been extracted and accumulates into a larger body, the clock is ticking for an eruption. As new crystals form in the magma, gas accumulates (as it doesn't go into crystals, so it is left behind and builds up in the liquid portion of the magma), leading to overpressure -- the recipe for an eruption. So, why the difference in zircon ages and quartz ages? Well, this has become a bit of a strawman in some articles I've seen in the media about this study. Most geologists who work with zircon would agree that zircon doesn't give us magma residence time, that is the time since the magma first formed. Instead, zircon is recycled repeatedly and records an integrated history of the magmatic system. So, those ages from the Bishop Tuff that date back 100,000 years tell us about how long it might take to generate all that magma. Crystals are incredible sources of information to understand volcanoes. From a single mineral that might be only half a millimeter across, we can examine hundreds of thousands of years of magmatic activity. By combining information from minerals that allow for absolute ages (zircon) and relative ages (like quartz and pyroxene), we can begin to really unravel the complexity that lies beneath volcanoes and hopefully better understand what leads up to an eruption. References