The sleek modular design of SpaceShip III aims to be visually striking, as well as easy to maintain and turnaround between flights. 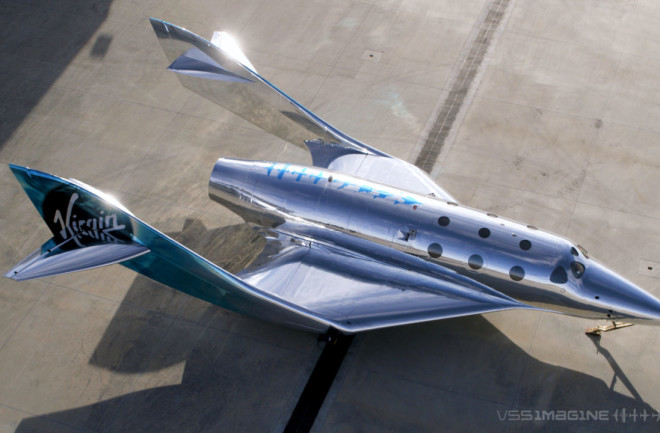 In just a few short days on July 11, billionaire founder of Virgin Galactic, Richard Branson, aims to officially become "Astronaut 001" when he flies to the edge of space aboard the company's FAA-licensed spaceplane, VSS Unity. Though considered a test flight, this mission will serve to globally showcase what the astronaut experience will be like when the company begins flying tourists to space as early as 2022.

VSS Unity has been through a lot over the past year — from technical issues to unexpected groundings to, most recently, a nominal spaceflight on May 22. Also known as SpaceShipTwo, this second iteration of the company's commercial craft has been the workhorse that's proven to the FAA that Virgin Galactic is ready to begin commercial operations. And though SpaceShipTwo will likely take paying customers to space in the coming years, it's not the only spacecraft the company plans to fly.

Earlier this year, thousands of paying space tourists got a glimpse at what will be their ride to the final frontier. And that future spaceship is bright and shiny. In late March, Virgin Galactic revealed the new design for its sleek SpaceShip III prototype, called VSS Imagine. It’s a spaceplane clad with a mirror-like finish that’s intended to carry six passengers and two pilots just beyond the edge of space.

VSS Imagine, like the other spacecraft in Virgin’s fleet, will launch from beneath a uniquely designed carrier aircraft called WhiteKnightTwo. This spaceflight system sees the spaceplane carried aloft to roughly 50,000 feet in elevation before being dropped from the mothership. After a few moments, the spaceplane's rocket engine allow it to climb above Earth's atmosphere and into suborbital space.

Though SpaceShipTwo has had recent success, the craft has been beset with issues in the past, resulting in the company missing a number of publicly announced test flights. SpaceShip III is meant to help overcome some of the problems of its predecessor.

The new design is more modular and should bring scalability and improved performance to Virgin Galactic's spaceflight program, according to company officials. Specifically, the more efficient design is meant to make the craft easier to manufacture, maintain, and quickly turnaround between flights. And the company is already building a second spacecraft of the same class, dubbed VSS Inspire.

“Today we unveiled our SpaceShip III class of vehicles, marking the beginning of the Virgin Galactic fleet,” Virgin Galactic CEO Michael Colglazier said in a media announcement. "VSS Imagine and Inspire are stunning ships that will take our future astronauts on an incredible voyage to space."

Still, to meet their lofty goals, the company will need to build many more spacecraft in the years ahead.

Virgin Galactic says it will eventually fly a staggering 400 suborbital spaceflights per year from each of its spaceports. Until recently, they’ve struggled to fly from their only currently active launch site, Spaceport America in New Mexico. The facility was built at a steep cost to taxpayers more than a decade ago. However, in recent weeks, it's finally starting to see some action.

In fact, Virgin has plans to livestream Branson's upcoming flight (which you can watch below). And if all goes according to plan, it's likely Spaceport America will be the stage for a widely covered post-launch celebration.

Virgin Galactic’s first powered test flight from Spaceport America came in December 2020, but the SpaceShipTwo flight had to be aborted because of an electromagnetic interference issue that occurred after it was dropped from the mothership. The spacecraft’s engine computer lost connection, which automatically shut down the engine. Fortunately, the pilots were able to safely glide the craft back to the runway. Virgin worked for months to address and prevent the issue from recurring. And the successful flight in May suggests their fix of adding additional shielding worked.

The company has already sold some 600 tickets to space at roughly $250,000 each. In the short term, those prices are expected to climb. However, as Virgin builds and flies more and more spacecraft over the upcoming years and decades, they aim to drop the ticket cost to a much more "affordable" price.

VSS Imagine’s style is strikingly similar to another spaceship prototype in the headlines. SpaceX’s Starship heavy-lift launch vehicle is clad in stainless steel, a throwback look that’s evocative of early Space Age comics, cartoons, and science-fiction stories. That’s appropriate because, together, the pair represent a new hope for the promise of space exploration, something both companies have pushed for years.

Once Virgin Galactic finally conquers its quest to ferry space tourists, it will be the culmination of a roughly two-decade-long journey. Way back in 2004, the initial version of today’s vessel, SpaceShipOne, became the first privately-built spacecraft to carry humans beyond the edge of space. That feat won Burt Rutan’s team the $10 million Ansari X Prize. It was also a key moment in convincing the greater public — and NASA — that private spaceflight companies might actually unlock a future of affordable space travel.

That vision still isn’t fully realized, but in the coming year or so, Virgin Galactic, SpaceX, and fellow competitor Blue Origin say they’ll start delivering. And considering Jeff Bezos is planning his own trip to space aboard Blue Origin's New Shepard spacecraft on July 20, we’ll just have to wait and watch how the Billionaire Space Race plays out.