Vietnamese are enriched by ethnic diversity!

There is a question on the World Values Survey which allows people to give a number corresponding to their position on a spectrum where 0 = "Ethnic diversity erodes a country´s unity" and 10 = "Ethnic diversity enriches my life." Below the fold I've placed the countries where this was asked as well as the mean values. In other words, the proportions in each class were used as weights. The results frankly surprised me. Below is an ordered list:

I wasn't surprised that the Swedes gave the "right" answer, but what's up with Mali? Some of these countries where people feel enriched aren't even that diverse. OK, I then decided to plot the % who were "Very Proud of their Nationality" vs. the mean score of attitudes to ethnic diversity (where higher scores = more positive attitude toward diversity). 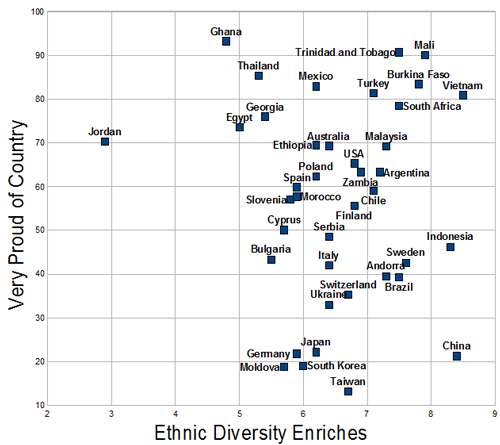 To the bottom right is China, a nation where very few are proud of their nationality and many feel enriched by ethnic diversity. To the top left is Ghana, where people tend to believe ethnic diversity corrodes nationality identity, of which they are very proud. To the top right is Vietnam, where people feel ethnic diversity enriches, but who are also proud of their nationality. It does seem that there is less representation toward the bottom left, those who are neither proud of their nationality, nor positive toward ethnic diversity, though Germany and Moldova tend toward this direction (it does seem logical that people who aren't particular proud of their nationality might not care too much about the national identity being corroded). I won't try to interpret these data, they left me scratching my head. It is interesting that the East Asian nations tend to exhibit very low avowed national pride, though South Korea, Japan, China and Taiwan are actually very homogeneous (relative to other nations). Additionally, I strongly suspect that the response to the question about diversity in Vietnam and China might have something to do with the nature of Marxist-Leninist indoctrination for most adults in those nations, where no matter the reality there was once much lip service given to a post-ethnic international future. Indonesia's national motto roughly translates into "unity is diversity", so this might also reflect some national of indoctrination at a young age.