I generally don't write too much about specific religions here on BA, for a lot of reasons. One is because discussing an entire religion is sure to drop the signal to noise ratio in the comments to 0, which is a pain and typically leads to irrational screaming rather than rational discussions based on evidence. But the big reason is that I prefer to attack specific arguments, not the people or establishments who make them. Many religions say the Earth is young, for example, but I don't worry too much about who they are, but what they're saying. And many religions do lots of good things, so attacking them en masse can be unfair. Having said that, what the heck is the Pope thinking lately? A recent article in the UK's Daily Mail talks about the Pope creating a guideline to help determine what apparitions of the Virgin Mary are real and which aren't. As regular readers know, I'm of the opinion -- backed by substantial evidence -- that at the very best the vast majority of these sightings are not real. They are, so far as I can tell, cases of pareidolia (seeing familiar patterns like faces in random noise) or mass hallucination. Some, of course, are simply hoaxes, and the Pope acknowledges this. His guidelines include having the claimant not go public, since that is highly suspicious behavior. 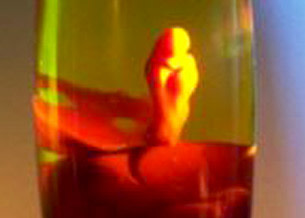 Some are just silly, like seeing the Virgin in your lava lamp (bonus: the skeptical viewpoint in that article is given by my friend Richard Saunders). I sometimes wonder: don't people ever take into account the likelihood that an event will spawn a Virgin-shaped object? Oil dripping down, wax solidifying, grain patterns, folds: all of these can easily make a simple oval shape, reminiscent of how Mary is generally depicted. Seeing that pattern in them is hardly a miracle; I'd expect it to occur given enough examples. If someone shows me a demure cloaked Virgin in a quartz crystal, then maybe you'll have something. But that announcement pales in comparisons to the next: the Vatican has released a previously secret list of sins. The list itself is not terribly surprising, of course. What shocked me was the way it listed relative importance of these sins: desecrating a Eucharist (the cracker Catholics believe is the transubstantiated body of Christ)

is considered a worse sin than murder or even genocide.

I had to read that part twice to make sure I had understood it, but the meaning is pretty clear. What PZ Myers did was worse, according to this doctrine, than what Stalin, Hitler, and Pol Pot did. I understand that if you are a devout Catholic, you truly and fervently believe the cracker has become the actual body of Christ. But honestly, is spitting it out -- an example specifically stated in the article -- or even driving a rusty nail through it a worse sin than actually murdering millions of living people? I've read the Bible, and from the Sermon on the Mount it doesn't sound to me that Jesus was someone who would think that way. Now, having dealt with the media many times before, I understand how things get distorted in articles like these. Also, I was not raised Catholic, so perhaps I am missing important information here. I would be very interested in getting the opinions and viewpoints of other people in the comments. There are well over a billion Catholics on the planet, so whether you agree or disagree with the tenets of the religion, it's a force with which to be dealt. So let's talk. Keep it polite, folks, and if you make claims, please try to include links. I am seriously interested in learning here -- I always am -- so let's keep this dialogue respectful of people's feelings, if not their ideas.