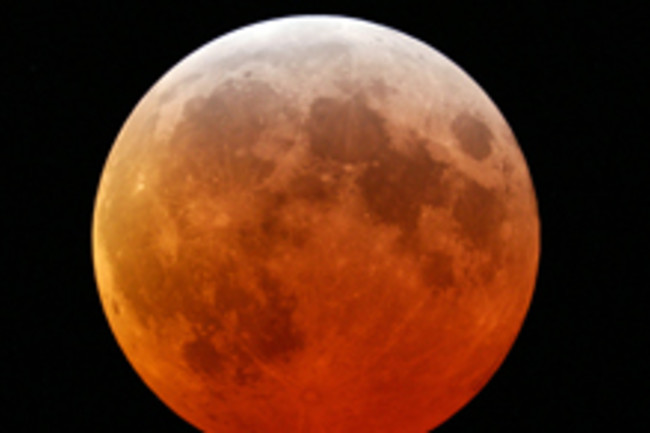 By pretending to observe the sunlight shining through the Earth's atmosphere from the vantage point of the moon, astronomers have gained a clue that may help them in the search for Earth-like exoplanets that could be harboring life. The astronomers

made their observations on 16 August 2008 during a lunar eclipse — in which the Moon moves into Earth's shadow. Even when the Moon is totally eclipsed by Earth, it is still bathed in a dim red light — from sunlight that has been bent as it passes through the edge of Earth's atmosphere. Using Earth-based telescopes, the astronomers detected some of this light after it bounced back from the Moon [Nature News].

In the study, published in Nature, researchers explain that the light carries information about our planet's atmosphere in its so-called transmission spectrum. The researchers were surprised to find that Earth's transmission spectrum revealed key signatures of life, including evidence of the gases methane and oxygen, which are associated with life on Earth. It also contained evidence of nitrogen, which is difficult to detect, as well as indications of the Earth's protective ionosphere.

Astronomers say they will observe similar spectra when an alien planet passes in front of its parent star and the starlight shines through that planet's atmosphere [Skymania].

Making those observations of an exoplanet as it "transits" across the face of its parent star will require a specific set of conditions. The Earth must be aligned with the exoplanet's orbit in such a way that the planet passes directly between its star and Earth, the star must be relatively close (within about 30 light-years of Earth), and the star must be a small dwarf so that the planet can block enough of the starlight for astronomers to get strong readings. Nonetheless, says lead author Enric Palle:

"Now we know what the transmission spectrum of a inhabited planet looks like, we have a much better idea of how to find and recognize Earth like planets outside our solar system where life may be thriving. The information in this spectrum shows us that this is a very effective way to gather information about the biological processes that may be taking place on a planet" [io9].